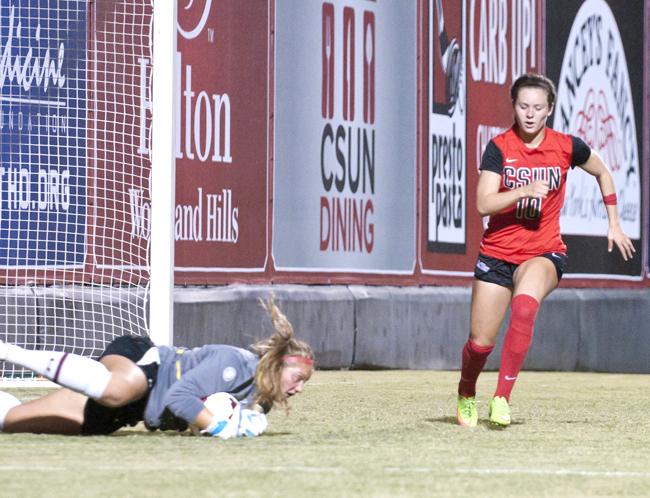 With the season coming to a close, the CSUN Women’s Soccer team will say goodbye to four players that have played an integral part of the team for the last few years. Midfielders Melissa Lopez and Hannah Wissler, forward Brittanie Sakajian and defender Leandra Walker will play their last home game Sunday night against the Hawaii Rainbow Wahine, and the team will be looking to give the girls a proper send off. As the night approaches, the four seniors take a look back on their careers as Matador athletes.

On her favorite time:

My senior year has been favorite. My time here at CSUN has been a rollercoaster but this whole year I have actually contributed and not been injured.

What she’ll miss most:

All of the girls. Over the time here, I’ve developed relationships I wouldn’t for anything. I have a team full of sisters, I can count on for anything

What it will feel like to take the field for the last time:

Very Emotional. I’ve spent the past five years dedicated to the team, program, and coaches. Leaving that will be a dramatic shift.

What She will miss the most:

Everything. I’m gonna miss the commitment, the hard work, and the relationships.

How she wants to be remembered:

I want be remembered as a hard worker and someone who put their whole heart into everything.

When we went to the NCAA tournament in 2012.

On this season’s statement:

Yes, just because we’ve had to overcome so much more just to get there. We were supposed to finish seventh in the conference so we’d have to prove everyone wrong.

On taking the field for the last time:

I don’t think it’s hit me just yet. It won’t hit me until I am there. It’s heartbreaking to think about. You don’t want this to be over. I wouldn’t be who I am without this program.

On her career ending:

It’s super surreal. I’ve been on the sideline for three years saying it isn’t going to come soon enough. Now that it’s here it is very sad but I’m happy to leave on a good note.

On what this class means to her:

They are my rocks. They are who I go to when I have a good day, bad day or just need a laugh.

Pay tribute to the seniors Sunday at 7 P.M at the Matador Soccer Field.