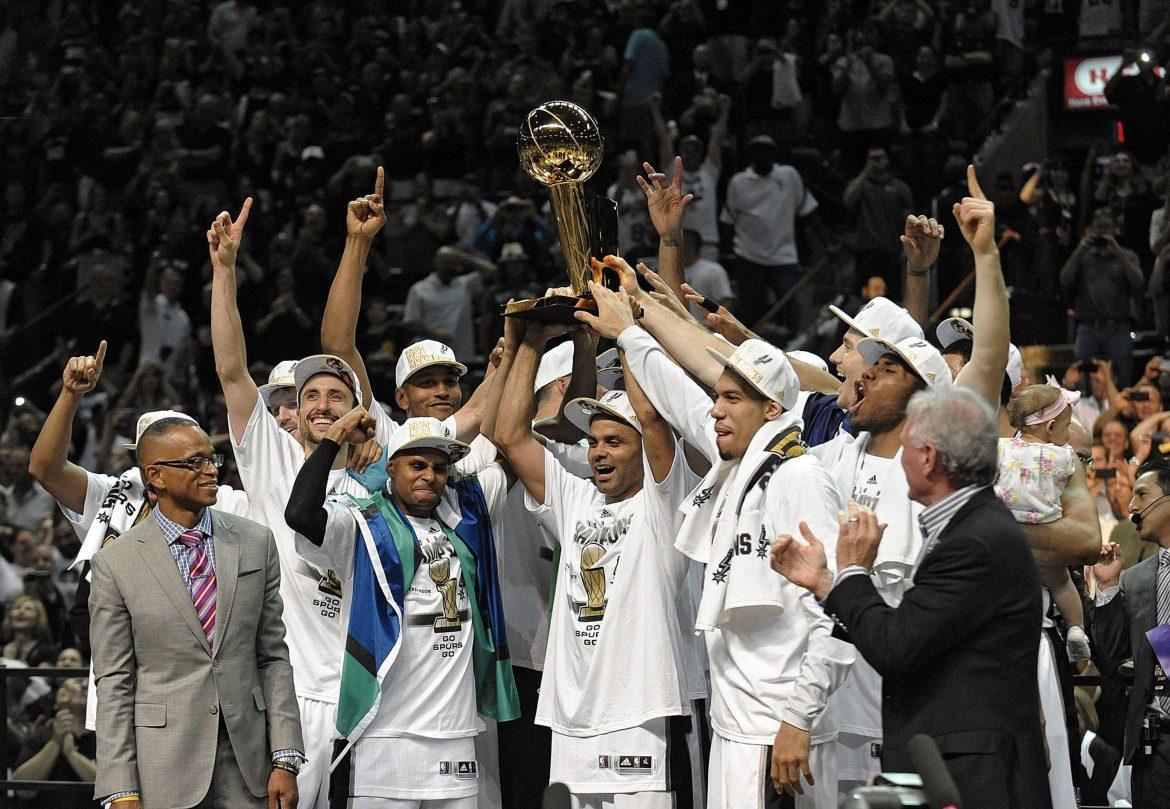 Before the Spurs can repeat again they must prove themselves to the rest of the Southwest Division. Photo courtesy of Tribune News Services.

With the NBA tipping off earlier this week, The Sundial Sports Staff broke down the top competitors within each division. Up first is the Western Conference, which produced last season’s champions. As always, the Western Conference has plenty of competition, but teams must get through tough division opponents before being deemed contenders.

The Spurs won the division last year and they will repeat as the Southwest champions this year.

They brought back underrated backup point guard Patty Mills as well as extending the contracts of coach Gregg Popovich and Tony Parker. With a starting five of Parker, Green, Kawhi Leonard, Tim Duncan, Tiago Splitter and a bench that features Manu Ginobili, Mills, Matt Bonner Marco Bellinelli and Boris Diaw, the Spurs have the deepest team in the division.

Although this team lacks that absolute superstar like a Lebron James or a Carmelo Anthony, this team led by Popovich seems to be in championship talks year after year. Leonard, last year’s finals MVP, will look to improve even more after averaging career highs in points, rebounds, assists and blocks. Look for Ginobili to bounce back from an injury-derailed season and Duncan will continue to be a force down low for his 18th season in black and silver.

The most intriguing team in this division has to be the Pelicans. They have a very young team featuring Anthony Davis. This is just the third year for the ex-Kentucky Wildcat and averaged a double double last season, albeit missing a handful games to injuries.

This is the wildcard team of this division. The question is whether they can stay healthy. Starting point guard Jrue Holliday missed close to 50 games last year. Eric Gordon and Ryan Anderson also have missed a fair chunk of games due to injuries. If this team can stay injury-free they will be right behind the Spurs.

The Dallas Mavericks will do just fine with a starting five of Monta Ellis, Dirk Nowitzki and new-comers Tyson Chandler, Chandler Parsons and Jameer Nelson. However, this division is so deep that i put them third behind the Pelicans.

The Memphis Grizzlies with their ferocious defense will be a pain for other teams. With a team featuring Mike Conley, Zach Randolph and Marc Gasol, they will look to play their “Grit and Grind” style of play. Gasol will be in talks for defensive player of the year but this team is just not deep enough.

The Houston Rockets will flame out early. Although this team has arguably two of the top 10 players in the NBA in James Harden and Dwight Howard, the Rockets have no depth behind the starters.

After declining the offer made to Chandler Parsons who went to the Mavericks, giving away Jeremy Lin to the Lakers, trading away Omer Asik and missing out on Chris Bosh, this team is very thin. Their bench features veterans Jason Terry, Francisco Garcia and three-point specialist Troy Daniels which is not going to scare anyone.

The run for the Pacific division will most likely come down to the Los Angeles Clippers and the Golden State Warriors, the top two teams in the division last season. However, with a healthy Kobe Bryant back in the Los Angeles Lakers lineup, it’s hard to count the Lakers out just yet.

The Clippers, following their first ever division title last year, return this season with the same core group of players. Their main additions this offseason, forward Spencer Hawes and guard Jordan Farmar, will come off the bench to fill key roles for the Clippers in place of Darren Collison and Ryan Hollins, both of which signed with the Sacramento Kings during the offseason.

The Warriors come into the season with a new coach in Steve Kerr. As a player, Kerr won five championships under Phil Jackson and Gregg Popovich, and later had an unsuccessful run as the general manager of the Phoenix Suns. The Warriors return with the same starting lineup as last season, which includes the “Splash Brothers,” Stephen Curry and Klay Thompson, who shot a combined 42 percent from three point range last season. All eyes will be on Thompson following an impressive run this summer with Team USA in the FIBA Basketball World Cup.

The Phoenix Suns barely missed the playoffs last year, ending ninth in the West with 48 wins. With the addition of Isaiah Thomas to their backcourt, the Suns look to play fast on the run and have a chance to reach the playoffs.

The Lakers look to make a comeback this year with the return of Kobe Bryant, who missed all but six games last season with two major leg injuries. The Lakers lost center Pau Gasol to free agency this summer, but added point guard Jeremy Lin and forward Carlos Boozer to the team. The Lakers’ success depends largely on the team’s health. If Bryant and his supporting cast can avoid injuries, the Lakers have a shot at making the playoffs. Still, losing Julius Randle and Steve Nash for the season has already crippled the team.

The Sacramento Kings will begin this season with the addition of Darren Collison at the point guard spot. Starting center Demarcus Cousins can prove to be valuable for the Kings after playing a key role in Team USA’s gold medal run in the World Cup this summer. However, in a competitive conference like the West, the Kings’ playoff hopes seem dim.

The Northwest division is and will still be led by the Oklahoma City Thunder in this 2014-2015 NBA season. Behind the phenomenal play of the defending league MVP, Kevin Durant, as well as the tenacious game of ex-UCLA Bruin star point guard, Russell Westbook, with the big body defensive presence of Serge Ibaka in the paint, the Thunder will have no problem skating their way to the top of the division, if not further, once again.
Despite the early preseason injury to their leading man Durant, and the rising dominance of the boys that reside in Portland (the Trailblazers), it is the Thunder’s explosive offense, deep bench, combination of veterans and youngsters, as well as their playoff experience style of basketball behind Coach Scott Brooks, that will remain to be their keys to success. Not only are they more tested than the Blazers, but the Thunder’s star duo shines brighter than Lamarcus Aldridge and Damian Lillard in Portland. Oklahoma will also top Minnesota now without their “Love” in the double-double man, Kevin Love. In addition to Trey Burke’s Utah Jazz, and the Denver Nuggets, who both lack team identities.