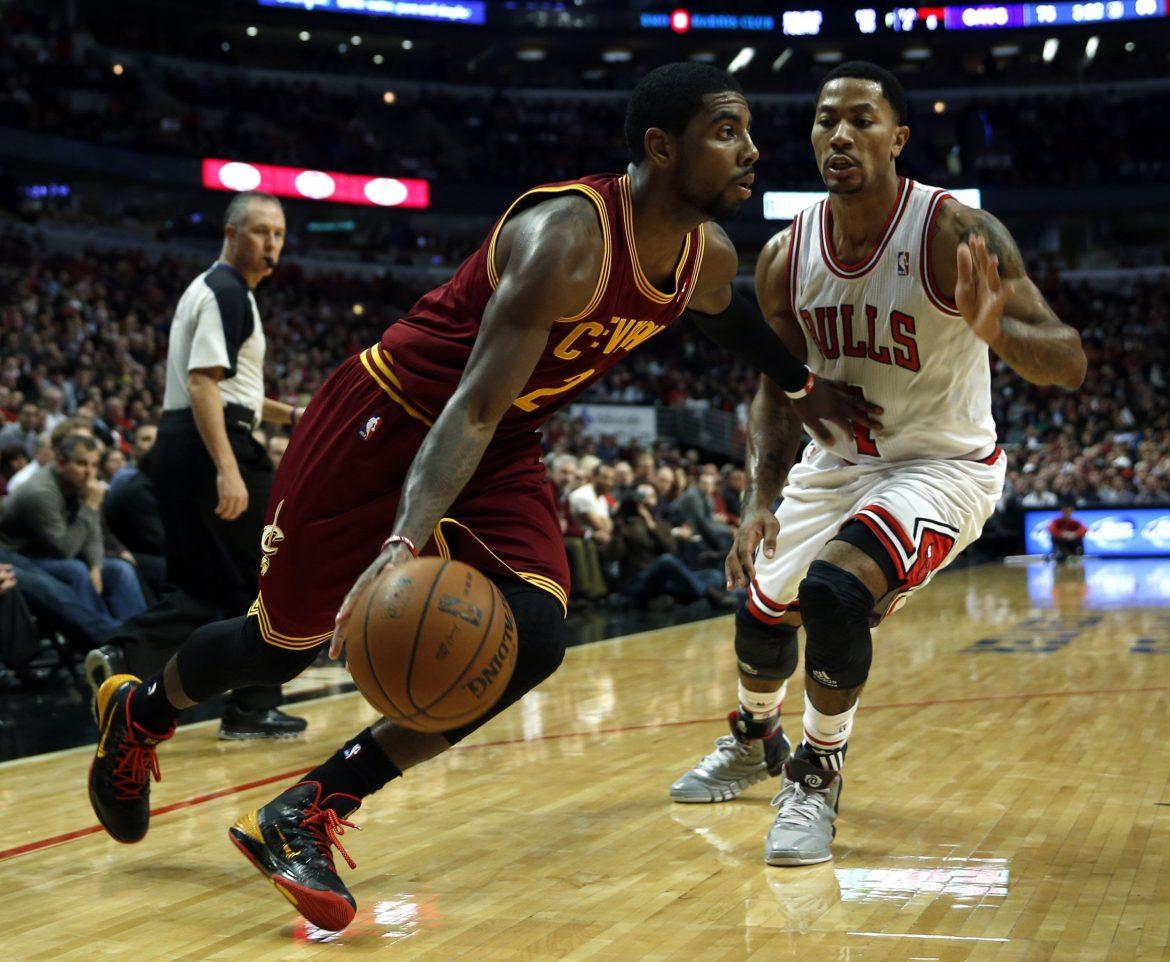 Kyrie Irvine teams up with Lebron James to make the Cavaliers an instant competitor for the Central Division and the Eastern Conference. Photo courtesy of Tribune News Services.

The Sundial Sports Staff continues their run down of the NBA season which is in its early stages. The traditionally weak Eastern Conference and its divisional titles have several contenders, after an eventful offseason.

The Cleveland Bulls. This is a new team I’m forming because I truly don’t know who will come away with the division title. With Lebron James coming home, Pau Gasol moving to the Windy City, Derrick Rose healthy and looking good, and Kevin Love being lured to Ohio, these two teams will jockey all season for the best record in the division — and probably the league. The only thing that can derail the Bulls is an injury to Rose. And if the last two years are any indication, Chicago fans should be cautiously optimistic.

For the Pacers, with no Paul George and Lance Stevenson — their best offensive players last season — they’ll have to rely on guys like Roy Hibbert and David West. Yikes.

They won’t make the playoffs this year, even in a comically weak Eastern Conference. In the division, they’ll fare better than the Bucks, but that’s not anything to celebrate.

With the addition of head coach Stan Van Gundy the Pistons have a good chance of making some noise this season. They won’t challenge the Bulls or the Cavs in the division, but they’ll be closer than people think. Van Gundy will have this team playing defense and a passable NBA offense. The roster still has talented bigs in Josh Smith, Andre Drummond and Greg Monroe, and with the additions of D.J. Augustine and Jodie Meeks, their shooting will definitely improve. Don’t be surprised if this team makes it into the bottom two or three spots in the east playoff picture at the end of the year.

The opportunity to win the Southeast division seems more realistic for the participants in the group now that LeBron James is with the Cleveland Cavaliers.

Miami Heat seems to be the favorite by many to obtain the division, but there are four playoff teams in the group and the Washington Wizards have the best chance to clinch the division.

The Wizards have point guard John Wall, who is one of the best all around guards in the league. Also, he has shooting guard Bradley Beal, who might be the breakout star this season; making Washington’s backcourt duo the NBA’s best.

The team finished second in the Southeast division and was the fifth seed in the Eastern Conference last year, where they lost in the second round to the Indiana Pacers in six games.

The team added veteran forward Paul Pierce, where it hopes he will be a mentor to the younger players like Beal, and can be a contributor in helping the Wizards compete for the division title.

The biggest headline within the division will be how the Heat does without James. The Heat picked up forwards Luol Deng, Josh McRoberts and Danny Granger, and the team obtained forward Chris Bosh; so the Heat shouldn’t drop a lot with its talents.

Watch how Bosh does as the best player on the Heat. He averaged 24 points in his last season with the Toronto Raptors, but than averaged 15 points a game in the four seasons playing with James and Dwayne Wade. With James out of the picture and an aging Wade, Bosh automatically becomes the first option for the Heat and he will be leading this team to the playoffs.

The Charlotte Hornets and Atlanta Hawks have enough to clinch a low playoff seeds in April, but those teams shouldn’t have enough to give the Heat and Wizards a battle for the division.

With Boston and Philadelphia in rebuilding years and the Knicks adjusting to new leadership and a mediocre roster, the Atlantic Division comes down to a two-team race between the Nets and Raptors.

Brooklyn comes in with a seasoned head coach in Lionel Hollins and hopes of healthy seasons from all-star caliber center Brook Lopez and former top-5 NBA point guard Deron Williams. The Nets have the bodies to bang down low with any team with 6-11 forwards Mason Plumlee and Kevin Garnett, and have streaky outside shooters in Marcus Thornton, Mirza Teletovic and Joe Johnson.

The Nets have shown signs of greatness, sweeping the Lebron James-led Heat teams during the regular season and taking a tough first-round series win in a game seven in Toronto last season. Brooklyn should have another successful season and raise their win total in an ever-decreasing competitive Eastern Conference. However, they will be no match for the rising Raptors.

Toronto comes in with a young, hungry team ready to make some noise in the Eastern Conference. If last season was their coming-out party, this season will be their first deep playoff run.

Behind the dynamic starting backcourt of Terrence Ross and Kyle Lowry, second-team guards Greivis Vasquez and Louis Williams can match up with most NBA starting backcourts. DeMar DeRozan is a capable slasher and the power-forward trio of Patrick Patterson, Amir Johnson and Tyler Hansbrough can score, rebound and bang with most teams’ frontcourts. Jonas Valanciunas is developing into one of the NBA’s most underrated double-double machines, and head coach Dwane Casey finally has some playoff experience under his belt.

Where injuries and age may slow down the Nets toward the end of the season, the youthful Raptors will have the depth and athleticism to keep ahead and take their third Atlantic Division crown.