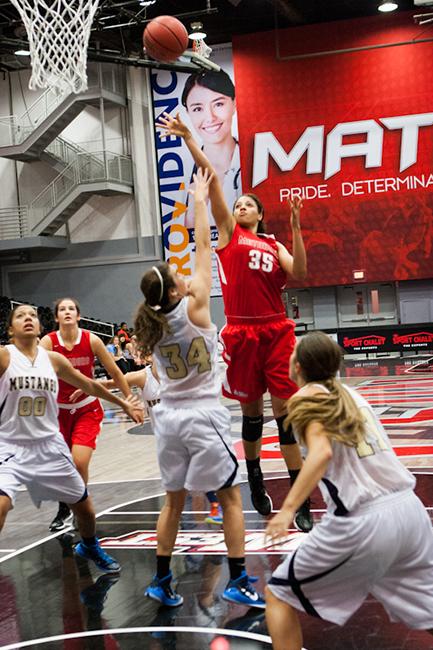 The Matadors, returning from a year that led them to the NCAA championship, didn’t take the opening exhibition game of the 2014-15 season lightly.

The current Big West Conference champs played against the Master’s College Mustangs with an all-around court ferocity that secured a solid 90-56 victory and left the opposing team frustrated.

“We kind of made them feel like they were out of their element,” CSUN guard Cinnamon Lister said.

The Matadors dominated from the start, with center Camille Mahlknecht taking the game tip-off allowing guard Janae Sharpe to land a three and set the pace for a mean run. It wouldn’t be until around 9 minutes in the first half until Master’s College broke CSUN’s 20-point run.

Things didn’t get too much better for Master’s College as the half played through. The Mustang’s just couldn’t get the paint shots to keep up with the Matador’s goal consistency and the frustration started to show.

CSUN’s defense was so unrelenting it sometimes forced the private school to shoot nearly from halfcourt as the shot clock ran dry, and when they hesitated, CSUN was quick to snatch a steal.

Master’s College upped their fight at the bottom of the first half and made hard pushes to the rim but had little success breaking CSUN’s defense.

In the second half, they managed to put some pressure on CSUN and get into the paint to land some shots.

“We had some mental lapses on defense, ” Guay said. “We weren’t talking to each other when we should have been.”

But the Matador’s mistakes weren’t enough to give Master’s College a chance, and at game’s end the Mustangs trailed by more than 40 points.

CSUN closed with shooting 50.8 percent for the game, while clearing the bench and giving new talent some play on the court.

With the start of the season the Matador’s are excited to make good off of the last season’s success.

“It feels great,” Guay said. “We want to do better this season.”