Men’s Soccer: Matadors stay in playoff race with 2-0 win over No. 14 UC Irvine 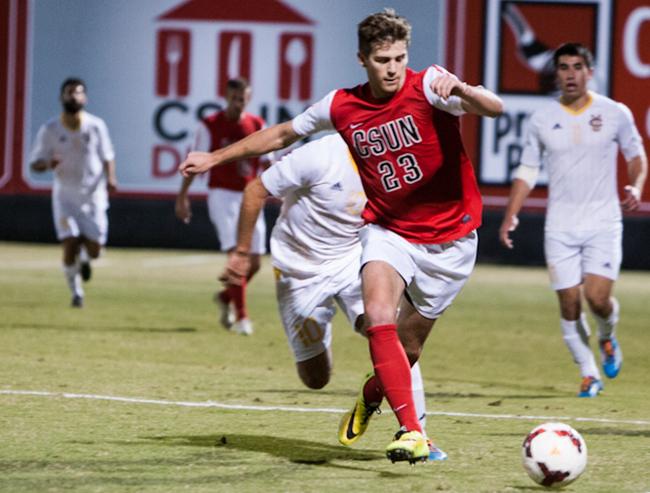 “Everyone in this league so tight and everyone is so even,” head coach Terry Davila said. “On any given day, anything can happen.”

After the seniors were appreciated during the pre-game ceremony, the Matadors were quickly on the defense soon after kick-off. An attack down the right flank shifted toward the box, and the Anteaters took a shot off and nearly scored a goal if it hadn’t been for the top-post.

The Anteaters were on the offensive for most of the first half, but any chance taken on junior goalkeeper Adam Hobbs was easily smothered. Peixoto had an early chance to knick a first free-kick, but it was deflected off the Anteater wall. The Matadors were out-shot 10-5 in the first half, but CSUN didn’t look like they were out of the match.

CSUN quickly took the initiative in the second half, but didn’t find a clear chance until the hour mark as sophomore Pol Schonhofer Bartra sent the ball inside the box toward the goalkeeper only to have the ball punched out. But a foul outside the box gifted the Matadors a free-kick that Peixoto beautifully swung it into the back of the net as he made it 1-0.

“I’ve just practiced and practiced a lot,” Peixoto said. “I hit the wall in the first one, so I knew I had to get it over it and it was fortunate enough to go in.”

The goal inspired the Matadors to push forward for another goal. A nice combination from sophomore midfielder Nicolas Camacho and junior midfielder David Turcios found Lev-Ari in the open and slotted it home for the second goal of the night, and the 42nd of his career.

“The team played well and ran a lot,” Lev-Ari said. “But Marino made a great goal, too.”

Irvine started to pick it up to get a goal in for the last 15 minutes of the match, but Hobbs was able to keep a clean sheet for the night as the Matadors closed the game with a 2-0 win.

The Matadors will go into a winner-take-all scenario in the final game of the Wednesday night against Cal State Fullerton to make it into the Big West playoffs.

“I told the kids that it was going to come down to the last game of the season,” Davila said. “It’s a great opportunity for us.”