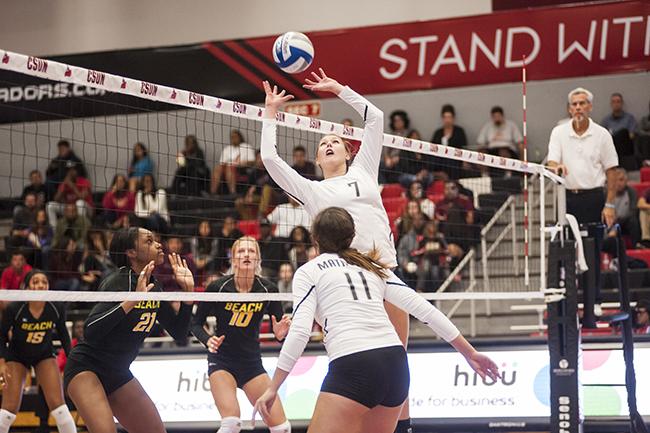 Serving and passing is where the Matadors fell short during Saturday’s 1-3 loss against the Long Beach State 49ers.

Junior outside hitter Danetta Boykin led the team with 19 kills, four assisted blocks, a service ace and a hitting percentage of .515 on 33 attacks.

Boykin played a significant role in many of the Matadors’ shining moments and said that as long as the Matadors continue to believe in their collective potential, they will keep doing better.

“I think that we need to know that we are good and that we can finish,” said Boykin. “We need to remind ourselves that we will push through the last few points.”

The Matadors did not make things easy for Long Beach by keeping the scores close throughout every set.

Set one was in favor of the Matadors as they were able to keep a lead on the 49ers for the majority of the time. Freshman setter Lauren Conati put up the first of three Matador service

aces in the first set.

A kill from Hinger kept the Matadors’ lead intact at 12-10 until the 49ers turned the tables with two consecutive kills. After the 49ers solidified their first lead of the set, both teams stayed close

in points until the tail-end of the set.

The score was tied at 20-20 after an attack error by the Matadors but they quickly redeemed themselves after a 5-1 run that certified their one and only set win at 25-21.

The final set kept to two and three’s formula except that the 49ers were able to keep at least a two point lead most of the time. A kill from Diaz and a 49ers attack error pulled the lead close at

After two attack errors by the Matadors, Hinger and senior opposite hitter Natalie Allen put up two sequential kills putting the score at 23-21.

The final two plays resulted in kills from Long Beach that won the team the set, at 25-21, and the match.

The Matadors made eight more hitting errors and eight more serving errors than the 49ers. Matadors head coach Jeff Stork noticed the areas that are in need of improvement and wants to

“We still need to do the same things that any team that wants to win does and that’s to serve tough and pass well,” Stork said. “When we do that, our offensive numbers are very good. We

didn’t do that at times, which was an issue, but we give credit to Long Beach State. They found a way to take advantage of our blocking and attack very well.”

Despite the errors committed by the Matadors, they were still able to out-hit the 49ers 77.0-70.0.

Boykin personally credits that to the team’s ideology of not being afraid to try and successfully complete the play.

“[The Matadors’] thought was to just go for it,” Boykin said. “We have everything to live for and nothing to lose, besides the game, so why not go for it?”

The Matadors will be traveling to Honolulu for their match-up against the Hawaii Rainbow Wahine on Saturday, Nov. 8 at 9 p.m.