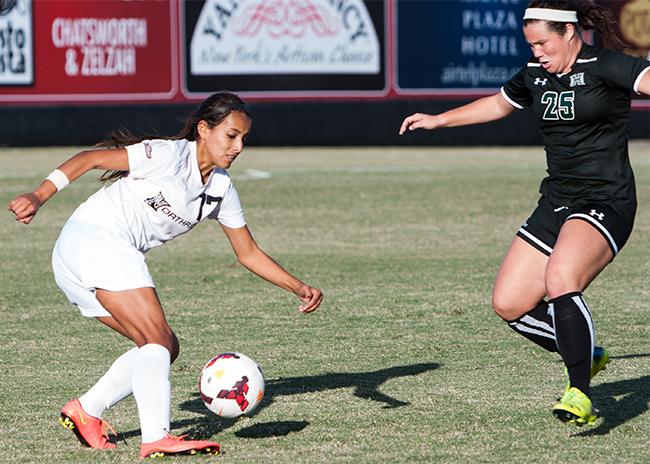 Freshmen Vanessa Mercado, quick on her feet, blows past her opponent in Sundays game against Hawaii on Nov. 2. Photo Credit: Kelly Rosales/ Contributor

Emotions ran high both on and off the field as the Matadors (7-10-2, 4-3-1) drew to a 0-0 result in double overtime against Hawaii (7-10-1, 2-5-1), Sunday in their final Big West Conference matchup. CSUN honored seniors Melissa Lopez, Brittanie Sakajian, Leandra Walker, Hannah Wissler and junior Rachel Webb, who made her first and final appearance for her career due to injuries over the past few seasons.

“In the beginning it was really emotional thinking this was the last time we were going to play here,” said Wissler.

Despite the reality of playing their last home game at Matador Soccer Field, CSUN fought hard against the energized Rainbow Wahine to keep an even score and their fourth seed in the Big West Conference Tournament.

Hawaii came out strong in the first half producing nine shots over CSUN’s five and a solid control of the field.

“We had moments of greatness but I feel like we need to be more consistent, we came out in the first half a little slow but as the game went on we pieced things together,” said Sakajian.

Still tied at the half both teams battled out the remaining regulation time with a physical show of force resulting in 29 fouls combined and 5 yellow cards. Taylor Hobson, Tabatha Dickson and Kourtney Kutscher saw the card for the Matador squad who also felt the absence of Head Coach Keith West due to suspension from a red card during their game against Long Beach.

Regulation time ended scoreless and both squads faced off in overtime to clinch a result for the afternoon. Despite a last minute shot by Hawaii in overtime Matador goalie Jovani McCaskill earned the shutout with a career high nine saves and her fifth
shutout of the season.

“It just showed us that we have so much more to give and that we need to bring more for the tournament, we’ve played them all before and we know what to look for,” said Walker “I just want to beat Long Beach”

Long Beach State and Cal Poly are slated to kickoff at 7:30 p.m. following the Matadors appearance to top off first round play in the tournament.