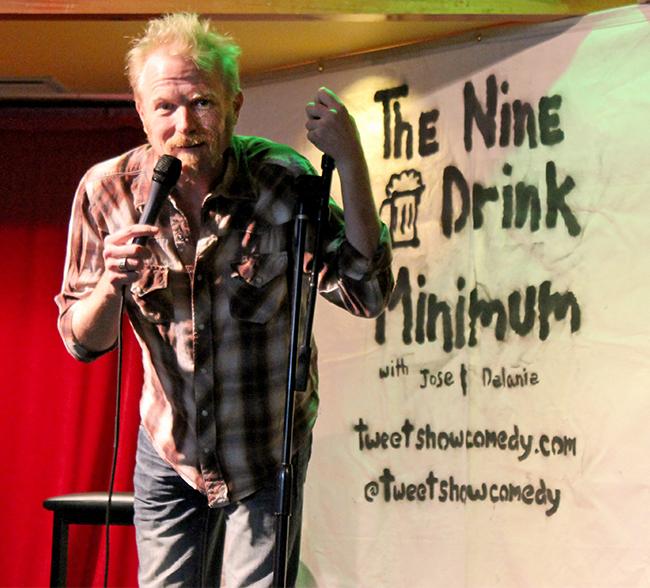 English professor turned comedian, Jose Alvarez started off by studying English with a creative writing emphasis during his undergrad years at CSUN. It was when he took a comedy writing course during his last year that he first explored the fun side of writing.

So how does one go from professor to comedian?

During the comedy writing class, he would perform what he wrote and receive feedback from the professor and his peers. That, however, changed when the class performed for an outside audience.

He was quickly forced out of his comfort zone and that’s when the comic in him was born.

“It was just an exhilarating experience…and I got pretty good feedback and reception from it,” Alvarez said. “So that’s how it really got started.”

Encouraged by the response from his audience, Alvarez started performing at open mic nights with other comedians.

Eventually, Alvarez wanted to start a show in the Valley which was where the idea for The Nine Drink Minimum came from.

“There’s two places to do comedy in this country either LA or New York and LA is huge,” Alvarez said. “I thought it was interesting there was nothing in the Valley.”

He met his co-host Delanie Fischer during an open mic at Pho King Delicious in Northridge and decided the atmosphere would be ideal for the startup of The Nine Drink Minimum.

“It’s the weirdest venue, but come show night it just transforms into this great space for comedy and we have such a good time,” Alvarez said.

The show has only been running since February and has turned heads and gathered a following.

“They made me laugh, they were just so blunt about everything.” said audience member and CSUN student Danielle Gonshor, 23, senior liberal studies major.

One of the inspirations for the show is The Meltdown, a weekly live comedy show located in Meltdown Comics in Los Angeles. The Meltdown is not traditional comedy, in the sense that it is not located in a restaurant or venue where there is a cover charge and requirement to order a drink minimum.

The name Nine Drink Minimum is a play on that drink minimum, Alvarez explained.

Alvarez and Fischer took the idea of an independent, free of charge event and used it to bring good quality comedy.

“We knew we wanted quality,” Fischer said. “There are some awful shows just trying to make money.”

Since the show does not require a cover charge or a minimum drink requirement, the comedians are paid through donations. This is one of the things that attracts up-and-coming comedians such as Chinedu Unaka, Kira Soltanovitch and JC Currais. At the end of the day, despite the lack of rules and limitations, comedians are able to make some money.

“There are so few shows that pay their comedians,” said Alvarez. “Unless you’re the headliner you’re probably not getting paid.”

The show is also unique in the way that it is very interactive online.The Nine Drink Minimum prides itself as the only online accessible and Twitter interactive stand-up comedy show. The audience is encouraged to live tweet with comics during each new Nine Drink episode featured on tweetshowcomedy.com

“My favorite nights of the month are when we do our show,” Alvarez said. “At the end of the night you have an awesome product you can be proud of.”

Alvarez advises people who have an interest in comedy to pursue this only if they have a real passion for stand-up especially since it serves as an outlet with a much deeper underlying meaning.

“A lot of comedy stems from you wanting to be vocal about issues in society,” Alvarez said. “Aside from easy gags and punchlines, a lot of comedians really do tackle serious issues and it’s a way of commenting about issues that you couldn’t talk about otherwise.”

Alvarez hopes to transform the show into a weekly event and eventually start a tour.

“I’ve been doing it for fun, its a secret passion I’ve always had,” Alvarez said. “If you take the approach that I’m having fun and it’s making a difference then I think that’s probably the best way to do it, if somebody happens to notice you that’s just the added bonus.”

The Nine Drink Minimum hosts shows every first and third Thursday of the month at Pho King Delicious in Northridge. The next show is on Thursday, Nov. 6th at 8:15 p.m. For more information visit tweetshowcomedy.com.