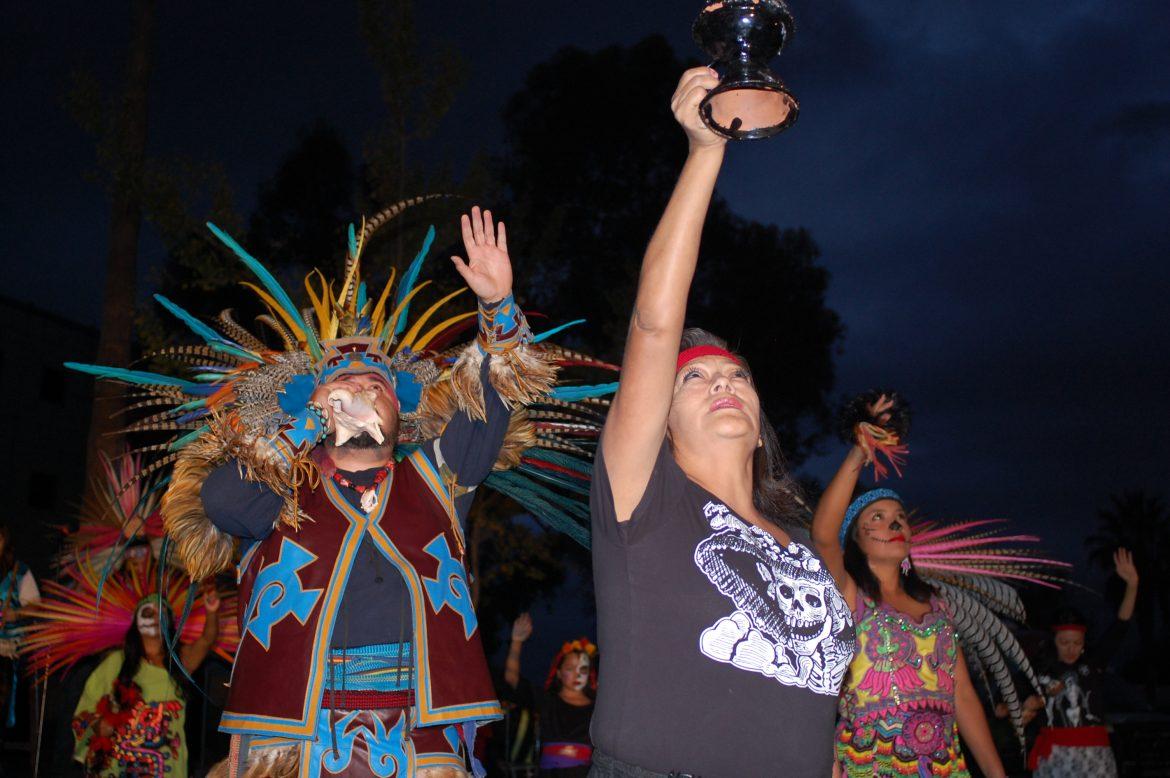 Each step was measured, landing softly on the concrete ground.

They numbered about 100, and made their way through some of the busiest parts of campus –– the Sierra Center, Oviatt Library, Matador walk. The procession stopped pedestrians in their tracks, as they took a moment or two to make sense of the scene in front of them.

Students, dressed all in black and wearing face makeup depicting the bones underneath the head and face, carried empty, black coffins.

The procession at CSUN was presented by Movimiento Estudiantil Chicano de Aztlán (M.E.Ch.A.) and the Chicano Studies Department.

Leading the Thursday Noche de Ofrendas procession was Jose Torres-Tama, a Ecuadorian-born performing artist. He was dressed in full costume as a Swamp Brujo, complete with skeletal face makeup, a top hat, coattails, and polished shoes. Emblazoned snakes knitted around his outfit completed the ensemble.

“This is my swamp brujo shamanistic outfit,” Torres-Tama said. “The outfit is to lead the procession.”

Torres-Tama wears the swamp brujo outfit during performances of his one-man “Aliens, Immigrants & Other Evildoers” show at Los Angeles Theatre Center. The show, he said, exposes the anti-immigrant hysteria and satirizes everything that’s green, like money.

At its core, the procession held three themes: to honor CSUN student Armando Villa, who died as a result of hazing by his school fraternity; to draw attention to the crisis at the U.S./Mexico border and the children affected; and victims of police brutality.

Joining Torres-Tama was Maria Elena Fernandez, a CSUN Chicano Studies instructor. She played the part of a mourning widow, dressed in a black veil and tattoo sleeves on her arms and legs depicting the limbs’ bones.

“Since we’re bringing it back, hopefully, we can get better and better at it to get our message across,” said Fernandez.

Day of the Dead remembrances can take many forms, depending on what part of the world one finds themselves in. In Mexico, families visit the graves of deceased loved ones where they eat and drink in their memory. Food and drink are also offered symbolically to the deceased.

“It’s kind of like to remember our past, said Raquel Cetz, freshman political science major. “It’s to keep the tradition going and pay respects and listen to other people’s stories.”

In Mexico, and now more common in the United States, elaborate altars are created. Many are decorated with trinkets and heirlooms that belonged to the deceased. Food and drink for the deceased –– sometimes pan de muerto (a sweet roll baked just for the occasion), tequila, or beer –– compliment the altar in order for the dead to have something to eat and drink on their way to the afterlife. Marigolds, the traditional flower of death, decorate the altar, and a picture of the deceased is the altar’s focal point.

The altars and the nighttime celebration, organizers said, serve as a way for guests to reflect on the life of the beloved deceased, and serves as a meeting place between the living and those ancestors and loved ones who have passed.

Over the years, organizers said, Day of the Dead has grown into a festival and celebration. But the celebration should also be used as an occasion to step back and reflect.

Day of the Dead altars at CSUN are displayed at Chicano House.

“Being part of M.E.Ch.A., this is more cultural, it’s an emphasis on separation of Halloween, which would be an Americanized or commercialized tradition,” said David “Chino” Contreras, a CSUN junior sociology and Chicano studies major. “It’s remembering the lives of those who lived. It’s not remembering that they’re dead.”

This is the second year the Chicano Studies department has organized a Day of the Dead Commemoration and the first year it has held a procession.

Fernandez feels Day of the Dead has become an excuse to party, and most people do not know what the day commemorates or what it is about.

“People don’t really know the heart of it,” she said. “The heart of it is what we did tonight. I’m down for the festivities, but I think it’s empty, it’s shallow, if you don’t spend some time, even if it’s by yourself or your family, or communally like we did tonight, remembering your loved ones.”

Organizers hope that events like the one held at Chicano House to commemorate Day of Dead offer students a space in which they can share, remember, and reconnect with those who have died before them.

Such was the scene at the Day of the Dead altar of CSUN student Armando Villa.

As friends and family gathered to remember the fallen student at this altar, they openly wept. A picture of a beaming Villa highlighted the altar, which measured at least six feet tall and was placed in a conspicuous corner of Chicano House, right at the entrance. His friends and family recalled his warm hugs, love, and heart of gold.

Personal artifacts that belonged to Villa were sprinkled across the altar, including items representing his childhood.

“We put countless tears and memories into what we’ve done, what we’ve created,” said Mark Castañeda, one of Villa’s cousins. “It’s heartbreaking, but at the same time you look at everything and how happy we were, how happy we are, having those memories. That’s something I’ll never forget.”

Construction of the altar has been the most difficult activity for the family, said Martha Castañeda, Villa’s aunts. The altar serves as a way to guide Villa back to his family.

“As you’ll see in our ofrenda that we made for him, there is more than a great variety of memories,” said Christopher Castañeda, Villa’s cousin. “Those memories are my prized possessions. I feel each and every one of your pain. The memories that we’ve lived through together, I’m grateful.”

During the testimonial portion of the Noche de Ofrendas, where friends and family members were able to speak about the deceased loved ones they were honoring, Maria Castañeda spoke in English and Spanish of her admiration she has for her nephew and effort to make sure justice is served.

“He stood for a cause,” she said. “And that cause cost him his life. And as his family, we will not remain silent. No one is going to silence these Mexicans, because we are going to get justice for him. God gave me a mouth and I am going to use it, because I know he [Armando] would want me to use it.”