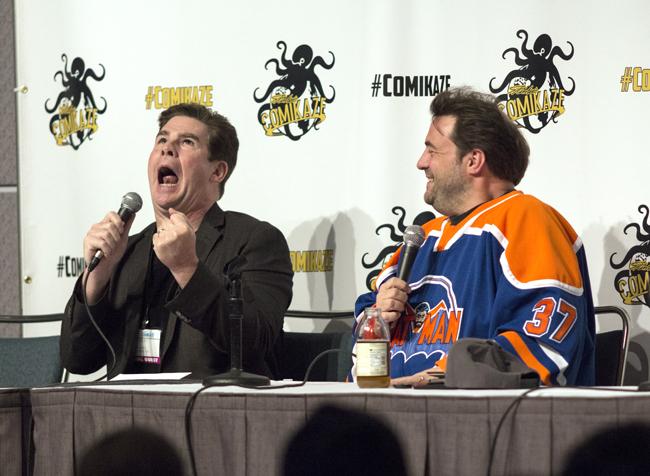 Actor and comedian Ralph Garman geeked out with director Kevin Smith in their Fatman on Batman: A Tribute to Batman '66 panel on day two of Stan Lee's Comikaze on Nov. 1, at the Los Angeles Convention Center. Photo credit: Trevor Stamp/ Senior Photographer

The convention floor featured comic books, action figures, and original artwork all for sale. The Video Game History Museum was back from last year and featured classic Mattel Intellivision games playable for free. The panels ran the gamut from “Posing for Cosplay Photography,” to “Broadcasting Your Nerdiness” to “Pop Culture Parenting.”

Horror legend Elvira made a rare appearance and was signing autographs at the Spooky World of Elvira, which featured props, costumes and set pieces from the Mistress of the Dark.

Comedy also had a strong presence at Comikaze. Comedians that weekend included Kevin Smith, Ralph Garman and the cast from Cracked.com.

One of Saturday’s main events was a MadTV cast reunion. Cast members Alex Borstein, Mo Collins and Debra Wilson shared some stories with the crowd including one involving Wilson streaking down the dressing room hallway on her last day, to the dismay of Collins’ eight-year-old son.

“Debra went back a little bit later to apologize to my son,” Collins said. “She said to him, ‘It wasn’t real’ and my son just looked up at her and said, ‘I know but why did you do it?’” This got a ton of laughs from the crowd. Some shared their inspiration for their characters.

Nicole Sullivan, said her inspiration for the cruel Vancome Lady was, “the mean lady I used to talk to at the make-up counter in Skokie, Ill,”

Interviews with the casts of “Game of Thrones,” “True Blood” and “My Little Pony” were also presented on Saturday. A cosplay contest rounded out the night with more than $10,000 in cash and prizes.

The night’s festivities didn’t end when the convention floor closed. Attendees were invited to the Cosplay Ball at Club Nokia, following the expo. Hosted by Bernie Bergman of Nerds Like Us and beautiful cosplayer LeeAnna Vamp, the official afterparty of Comikaze was full of nerds, geeks, gamers and the like.

DJ Galactic Ray played some hits to get the crowd into the mood. Musical guests Songhammer performed their unique brand of rock, fresh off their appearance at Blizzcon. The Flux Capacitors dressed as characters from “Back to the Future” and played 80s cover music that got the crowd riled up. “The Power of Love,” “Take on Me” and “Don’t You Want Me” were just a few of the crowd favorites. Katrina and the Waves’ “Walking on Sunshine” even got the crowd mosh pitting. “

That was first time I ever saw people mosh to that song,” the lead singer said. The goal of the night was to have fun but also raise money for charity. The Flux Capacitors raffled off one of their guitars and a portion of the proceeds went to the Michael J. Fox Foundation for Parkinson’s Research.

Sunday’s events included interviews with John Barrowman and the cast of “Teen Titans Go!” After the convention cosplayers and other guests gathered in the lobby for photos and interviews capping off a nerdy end to a geek-tastic weekend.