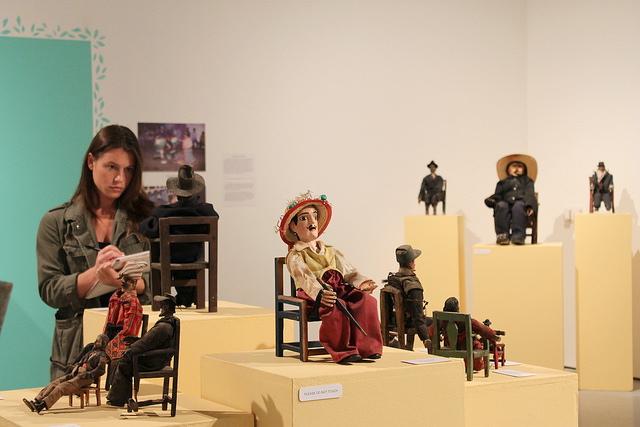 A sacred symbol can come in many shapes and sizes and the CSUN gallery is currently hosting a rare look at the various forms of one Mayan folk saint not commonly seen outside of the Guatemalan communities that revere it.

“Maximón represents a saint that unites the community in their effort to preserve ancient traditions,” said Dr. Beatriz Cortez, a professor of Central American studies at CSUN.

The various sculptures and figurines made in the likeness of San Simón were, at one time, religious centerpieces for a ritual of prayer that dates back to the early Mayan civilization. The figures vary in size, and are made from the materials that were available to the community of a specific region, at a specific time.

Though some figures may be carved of wood, others made of clay or similar materials, they all have a coinciding importance to those that revere them as an embodiment of San Simón. His meaning, though multi-faceted, stems from a desire to uphold and pay tribute to the traditions of the Mayan culture, despite colonization and the proliferation of Catholicism in Central America.

The saint and his various regional and historical representations, spur from a meshing of old and new religious ideologies. “He is a saint that represents syncretism in Guatemala, or a mixture of the Spanish and indigenous cultures,” Cortez said.

The saints depiction which varies from a small figurine to life-size interpretations, is usually kept in a home within the community where it was created, most commonly and traditionally the Western highlands of Guatemala.

Members of the Cofradía, those who care for the icon, present San Simón to the community in their home for a year before they decide who is best suited to carry on the tradition next. While in their home, the host creates an altar around the figure and allows the community and  tourists to come visit, pray, ask forgiveness or offer gifts.

“They take Maximón to their house and their house becomes like a temple and everyone in the town can go visit including tourists,” Cortez said while discussing the homes she visited that hosted San Simón altars during her trips to Guatemala.

For many, such as Cortez, who have only seen such sacred figures of San Simón in shrines in the home of a Cofradía, it is surprising to see them being displayed in this way.

“I think it is interesting to see them all together, but at the same time it is very different to see them out of their context,” Cortez said of the exhibit.

She speculated as to whether the figures were genuine or recreations, as such religious figures were usually coveted and kept by the community they belonged to.

According to Peri Klemm, co-curator of the exhibit, the collection, accumulated by the collectors, Jim and Jeanne Pieper, is composed of authentic figures. Klemm said the figures displayed in the exhibit were often going to be replaced with new ones or had been ordered to be burned by Catholic leaders. These leaders did not condone indigenous Guatemalans worshiping a saint that was deeply rooted in Mayan folk tradition and religion.

“He never took an object out of a ritual. He only bought objects that were being discarded or replaced with newer figures,” Klemm said of Jim Pieper.

San Simón took on a dual identity to many because of his indigenous and Catholic roots. “He is a Mayan folk god that was transformed to a saint to adapt to Catholicism,” Klemm said.

There are also several stories regarding the inception of San Simón. According to Klemm, some think San Simón is based on an Italian doctor who saved many lives in the region. She said this is often the explanation of the figures Westernized look and dress.

The other explanation is that he is based upon a sacred bundle that was worshipped by early Mayan people. The bundle was then hidden inside of a saint figure (Saint Simón) to avoid Spanish colonial aggression. Klemm said that because of this adaptation, “many see Maximón or San Simón as a blending of Mayan tradition and Catholicism.”

The exhibit offers many variations of San Simón imagery along with many photos of the altars they had once been a part of. In the back rooms of the gallery there are altars representing a traditional Guatemalan style and another that is made to pay tribute to Angeleno-Guatemalan heritage.

CSUN gallery director, Jim Sweeters, calls this “LA’s interpretation” of a traditional Guatemalan altar. He said this altar and the exhibit as a whole, was very exciting to many in the area and on campus because the large local and student Guatemalan community familiar with the saint.

The gallery exhibit is on display at the main gallery until Dec. 13. There will be a walk-through of the exhibit on Nov. 14 where attendees will have the opportunity to tour the exhibit with its curators and community members.