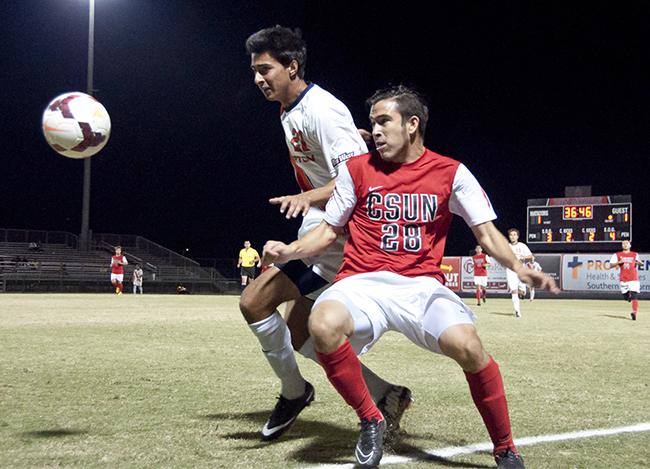 Matadors David Turcios, right, fights for the ball on the boundary line against Titans Jesse Vega, left, at the Matador Soccer Stadium on Wednesday, Nov. 5, in Northridge, Calif. The tie game prevented the Matadors from advancing to the playoffs that holds the Big West Tournament. Photo Credit: David J. Hawkins/ The Sundial

An equalizer right before halftime was not enough to give 10-man CSUN (7-9-3, 3-5-2 Big West) an entry into the Big West Tournament as the Matadors were held to a 1-1 draw against the Cal State Fullerton Titans (8-7-5, 3-4-3 Big West) after double overtime in the season finale at Matador Soccer Field Wednesday night.

The Titans scored in the 39th minute to take the lead before sophomore midfielder Juan Samayoa retaliated three minutes later for the equalizer. Senior forward Sagi Lev-Ari, who did not start the game due to injury, was denied his 12th goal of the season and the lead before senior midfielder Yarden Azulay was sent off for dissent.

The match started out with high pressure on both sides as CSUN looked to notch a win to clinch a playoff berth, while CSUF sought to bury the dagger and grab a win to clinch the second seed in the South Division for home-field advantage.

“We were looking to keep going and going to be relentless offensively,” head coach Terry Davila said. “But No Sagi in the first half really hurt us.”

The Matadors started out strong, controlling much of the match until the Titans woke up in the middle of the first half to gain momentum. It would work effectively as a Matador turnover led the opponent to a daring run toward the heart of CSUN territory and slotting home the first goal of the match passed junior goalkeeper Adam Hobbs.

Moments later, the Matadors found Lev-Ari at the edge of the penalty box, and the senior crossed it toward the middle of the box to have it deflected right toward Samayoa’s feet, and was slide down the bottom of the right post for the equalizer.

“The coaches always told me to keep it low and to the corners,” Samayoa said. “I closed my eyes and just shot it.”

The Matadors went into the second half still tied at 1-1, and it would stay like that for the rest of the game. Lev-Ari had a chance to give CSUN the lead right before the hour-mark with a penalty kick, but the Big West leading goalscorer was denied another goal and the lead, all while missing his first spot-kick in his career.

“It’s tough to see Sagi go out like that after such a career,” Davila said. “He was a true warrior all week to regain fitness. All the seniors had a great career.”

About 10 minutes later, sophomore midfielder Nicolas Camacho took a shot from distance that hit the post, but rebounded toward senior forward Edwin Rivas to head it towards goal, but was saved by the Titans’ goalkeeper.

Azulay would receive a yellow card for dissent soon after, and what the referee deemed constant disrespect handed the senior another yellow card right after, ending his night, and career. From then, Davila was forced to added more players into the midfield for more control.

Fullerton would respond moments before full-time with a cross toward the edge of the right side of the penalty box, with a shot toward Hobbs that was punched out to the left corner of the box. As the ball fell toward the feet of another Titans player, Hobbs was still on the ground, but jumped right up to save the impending shot for back-to-back saves.

“I expected us to work hard and put our bodies on the line,” Hobbs said, who registered nine saves for the night. “It’s just unfortunate that we came up short.”

It was scoreless for both extra-time halves, ending the game in a draw, and sending the Titans to the Big West Tournament, and ending the careers of seniors Mynor Giron, Tanner Snedigar, Edwin Rivas, Yarden Azulay, and Sagi Lev-Ari.

As the season closes on a sentimental note, Davila hopes to bring the team back to the Big West Tournament next year, and was grateful for everything that came this season.