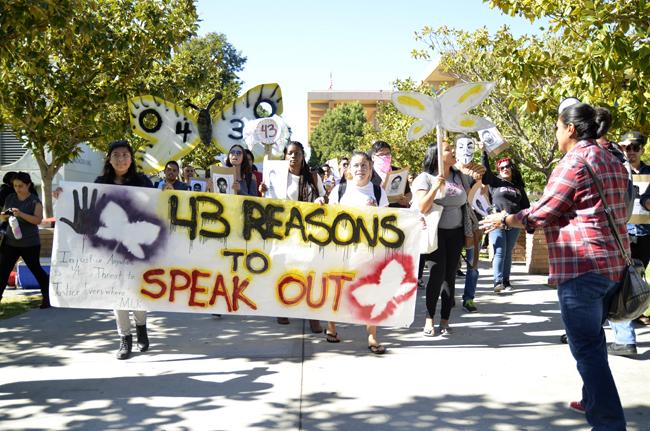 In 1991, her son, José Leonidas Moreno, disappeared without a trace after being deported from Colorado to El Salvador.

In 1988, the younger Moreno was caught running a red light. When the officer discovered he had no papers, the process to deport him began.

Now, the elder Moreno is reliving that nightmare 43 times over with the recent disappearance of student-teachers from the Mexican city of Iguala.

Trouble began on Sept. 26 when a group of 120 student-teachers from the Ayotzinapa Normal School near Tixtla, Guerrero, arrived at Iguala to protest education reforms. The students were also there to raise money to attend another demonstration in Mexico City.

According to media reports, at around 8:30 that night, police and other armed men began firing into three buses apparently commandeered or borrowed by the students. How the students acquired the buses remains unclear.

What is clear, however, is that as the students dispersed amid the gunfire; several were grabbed by police and shoved into police cars.

When it was all over, two students were dead.

Twenty-four hours later, the 43 students were declared missing by their classmates and friends when they could not be found at local police stations and jails.

At a protest march and rally Thursday morning at CSUN, Moreno said this injustice cannot be allowed to continue, as the whereabouts of the missing students remains a mystery.

“We cannot remain silent!” she shouted to the students gathered. “My conviction lies with finding my son and with helping other mothers find theirs. At the end of the day, when we spoke out to the government in Mexico, they did not hear us.”

In her effort to find her son, Moreno took her case to Mexico’s attorney general. There was a never any follow-up.

Like what happened after the disappearance of her son, once again, Moreno sees inaction from the Mexican government in attempting to find the missing 43 students.
“As mothers, we’re here suffering, searching for our children, willing to search even under rocks,” Moreno said.

Thursday’s march began on the eastside of Sierra Hall. By 11 a.m., about 100 students had lined up, some carrying large butterflies made out of cardboard with the number 43 written on them. Students from all ethnicities participated.

“They are students like us, so I felt like I could communicate with them on that basis,” said Jessica Samayoa, a freshman psychology major. “I just felt like coming here to encourage them and become a part of it.”

The march, organized by the CSUN Central American studies department was also held in remembrance of migrants who have disappeared as they come from Central America on their way to the United States, as well as those victims of violence in Mexico and Central America.

“We are trying to raise awareness and to show our solidarity,” said Linda Alvarez, a Central American studies professor. “Just because this is happening in Mexico, doesn’t mean it doesn’t affect us. We really wanted to make our voice heard as much as possible on the campus, so that not only the CSUN community but everyone around knows that we’re to support and we’re a voice of support for the migrants and the students.”

CSUN students Brian Gonzalez, a senior Central American studies major, and Christopher Castillo, a junior psychology major, both carried a black coffin with the words “Democracy” painted on one side, and “Freedom” painted on the other.

The coffin, they said, symbolizes the death of both.

“There is no freedom there is no democracy,” said Gonzalez. “Students are being persecuted by people that control their governments. Both are being canceled by each other, democracy is actually stopping their freedom.”

“We need numbers to show, to prove our point,” said Castillo. “People need to find out what’s going on. Everyone wants to keep pretending like it’s not happening, that nothing’s ever going to change.”

The march wound its way around the Sierra Complex and ended at Matador Square, where a podium was set up. Speakers addressed the audience, their voices echoing off the walls of nearby buildings.

“It’s nice to bring awareness, so more people can know about it,” said Shardae Young, a sophomore public health major who participated in the march. “I wish more could be done to help them.”

Kathy Kalawa, a sophomore public health major, marched alongside Young. Kalawa said the CSUN students participating in the march represent the faces of the missing students.

“For them to be acknowledged this way, I feel like it’s an important thing to be a part of,” Kalawa said. “There hasn’t been much media coverage on this as there should be. No one has spoken on this. No one has spoken about lives. Lives are not valued here.”