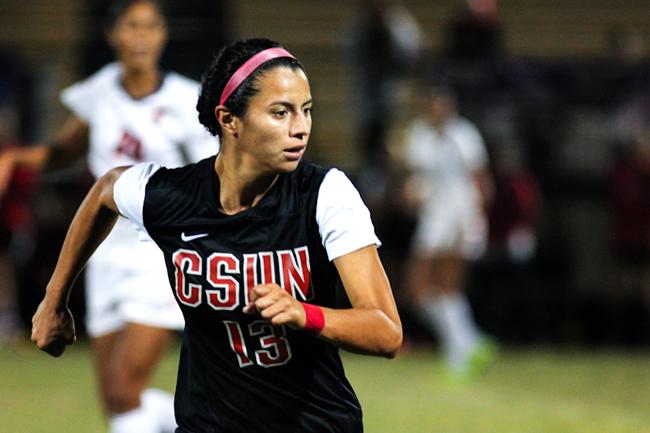 CSUN (7-11-2) suffered 1-0 loss to the Cal State Fullerton Titans Thursday night in the semifinal round of the Big West Tournament. A Titan goal in the 67th minute broke the scoreless tie for the win and marked the end of a hopeful season for the Matador squad.

The first half saw close play from both teams with only 7 combined shots in the first 45 minutes. The tight atmosphere bled into the second half as both squads squared off, hoping not to be the first to allow a goal.

The Titans broke the tension in the 67th minute off a free kick they sent deep into Matador territory. The kick by Titan Brianna Chapman found teammate Morgan Batcheller’s head but was deflected by Matador goalie Jovani McCaskill initially until CSUF forward Christina Burkenroad capitalized on the loose ball for the goal.

Despite the loss McCaskill finished the game with a solid performance earning two saves to finish off an already impressive season. As the first Matador to win a Big West Player of the Week honor since 2012, McCaskill proved her worth this season with 5 shutouts 0.80 goals-against average and a .846 save percentage.

The loss also serves as the ending point for four CSUN seniors, Hannah Wissler, Brittanie Sakajian, Leandra Walker and Melissa Lopez, who were all a part of the 2012 squad that earned The program’s first and only berth in the NCAA Tournament.

Now the Matadors end their most successful run since the 2012 season, tied for 7th before going into the Big West Tournament and with the satisfaction of marking a few program milestones. Their dual road wins over Santa Barbara and Cal Poly earlier in the season proved a first in program history and served as the catalyst for their fifth Big West Tournament seed in the past six years.