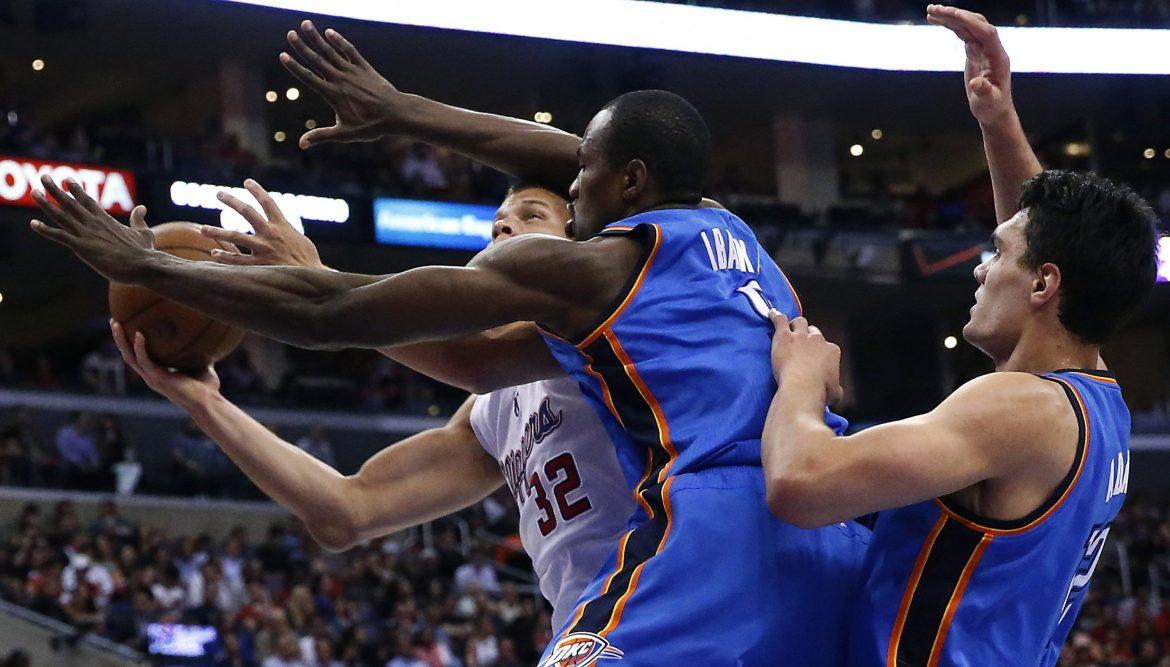 Thunder forward Serge Ibaka is among players who must step up for Oklahoma City as Kevin Durant and Russell Westbrook remain out. Photo courtesy of Tribune News Services.

The Oklahoma City Thunder experienced a dry period for the start of the 2014-2015 NBA season starting 1-5 without both their stars Russell Westbrook and Kevin Durant. If the Thunder’s role players can improve offensively and work as a unit, there is still a possibility to survive in the Western Conference.

Westbrook’s fractured right hand against the Los Angeles Clippers means a lack of scoring and leadership for the Thunder. Westbrook brings intensity and confidence to the table, but with only limited players and skills, Oklahoma needs to come out aggressive and strong, especially on the defensive end.

From the start of the season, Westbrook was anticipated to carry the team on his back and projected as an early MVP candidate. Now with both of their leading scorers out till at least December, the Thunder will need to use speed and heart out of their healthy young guns.

For the Thunder to stay in a safe spot in the rankings till December, they need their role players to take a lead and find their niche in the game. Small forward Perry Jones seemed to be taking an early jump into that role before his right knee injury against the Toronto Raptors on Nov. 7.

Jones averaged 15.6 PPG with a FG% of .467. Luckily for the Thunder, Jones is expected to come back from injury sooner than later. He will be one of the key offensive scorers out of the young squad to run the floor and produce points in all angles of the court.

A stronger start all begins with defense inside the paint. Frontcourt players Serge Ibaka, Nick Collison, Kendrick Perkins, and Steven Adams are able to keep points outside the middle, but assessing more vocal leadership to their wing players to rotate and close out in the perimeter will be a new duty for the post. Thunder’s post-men are the heart of the team and bring more experience into the game. Not only does Perkins have an NBA title from Boston, but Collison played with this team when they were actually in Seattle. The veteran front court players will be a guidance for the young run-and-guns to understand their role and positioning on the court.

Ibaka only has eight blocks within the last five games which is minimal compared to previous seasons. This is a low statistic for a big man at his defensive caliber. For the Thunder to control the tempo of the game, Ibaka will have to get his shot blocking back to form.

Still, Ibaka has improved his 3-point shot and all-around offensive ability. Through the injuries, he will not only be known as a defensive force, but an all-around skilled player.

With Reggie Jackson back in the line-up from multiple injuries, he plays as the poor man’s Westbrook. Jackson is explosive and confident while driving to the basket and will help out Ibaka as the other scoring option. In only two games, he is averaging 18.0 PPG, 4.0 RPG and leading the team with 9.5 APG.

Jackson has the capability to score and defend from what was seen last season. If Jackson can be continuant in his performance, he will become a go-to leader for the Thunder. All the players need to take one step higher in their game, but Jackson will be the threat to keep the Thunder alive till Westbrook and Durant are ready to play.

Although with most of the team out with injuries, many of the players can utilize the small roster and use this chance to have a break-out season. Players such as Lance Thomson, Jeremy Lamb and Sebastian Telfair will need to unleash their talent and become more comfortable with the pace of the NBA.

Ultimately, without Durant and Westbrook, Thunder will perform decent as long the players left on the roster can mesh well and find their own identity in the NBA. This will be a great learning experience for their role players to reveal their true colors with more minutes.