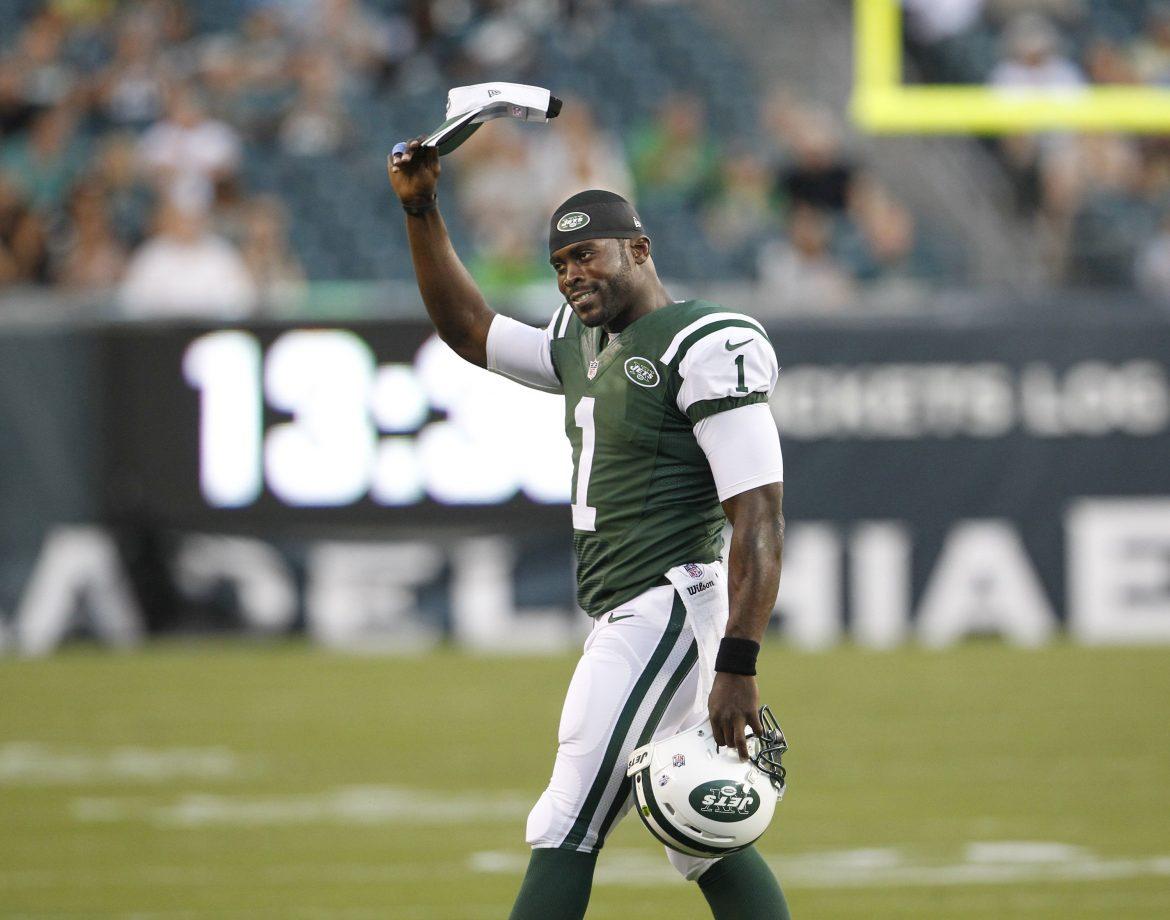 Despite his past mistakes, Vick should be remembered as a hero and the most polarized athlete of his generation. Photo courtesy of Tribune News Services.

Michael Vick will start against the Pittsburgh Steelers Nov. 9, after making his first start for the team Nov. 2 against the Chiefs.

Even the electrifying Vick does not have enough miracle left in him to rescue the dismal Jet’s season. However, Vick was able to complete 75 percent of his passes against the Chiefs including a touchdown pass. The team lost and Vick
fumbled but the performance shows he is more than capable of being a starter in the NFL, once again.

Vick’s play adds to a colorful resume that makes him the most polarized athlete of our generation. Rather the Jets win or lose with him, Vick once again overcoming adversity to become the starter makes him a player worth looking up to more than any other in professional sports.

Not only did Vick’s dual threat play blaze trails for players like Cam Newton and Robert Griffin III, but Vick’s tremendous story of redemption adds to his great legacy. 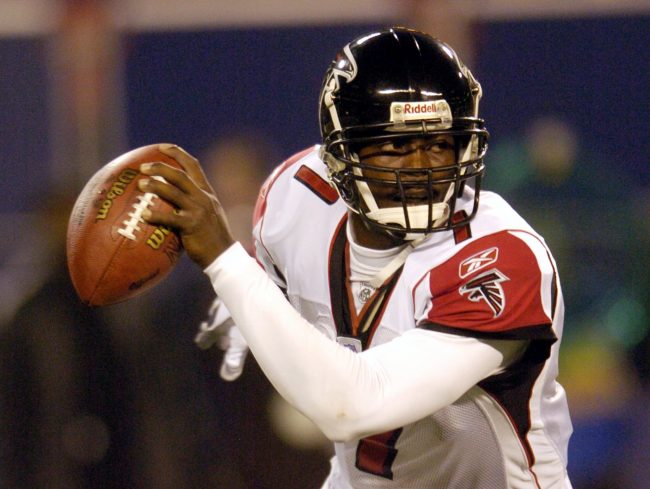 Many, including Pittsburgh’s Will Allen, recall Vick running defenses rabid in a No. 7 jersey with the Atlanta Falcons.

Vick’s ability to effortlessly flip the ball down the field in the passing game and his ability to make run-defenders look silly with his elusiveness captured the hearts of fans like myself.

Only a few years after notable playoff appearances against Donovan McNabb’s Philadelphia Eagles and Brett Farve’s Green Bay Packers, Vick had one of the biggest falls from grace in sports.

Found guilty for organizing a dog fighting operation in 2007, Vick’s jerseys were burned by fans and the once promising player served two years in prison.

Vick served time in prison before a stint as a backup with the Eagles earned him a shot at redemption. Photo courtesy of Tribune News Services.

Granted, there are many fans and people in the general public who will never forgive Vick for the terrible things he was responsible for against many dogs, evident by him being voted the most dis-liked athlete again in 2013.

However, in 2009 the Philadelphia Eagles were able to give Vick an opportunity for redemption which he ran away with.

After serving his debt to society and a year as McNabb’s primary backup, Vick was thrust into the lineup in 2010 after young starter Kevin Kolb was injured. Vick again showed his ability to impact games with his legs and arm, offering a prime example that people could find redemption even after the institution.

Ultimately, Vick’s injuries and inconsistent play lead to the Eagles pursuing younger quarterback options. Considering many thought he’d never play another down in the NFL, Vick’s brief success as the Eagles starter makes him a true story of redemption.

Despite the headlines on the field, Vick stuck to his obligations of working with the Humane Society. Vick continues to do a tremendous amount of community work to this day.

Vick has another chance to start in New York and add to his legacy. Photo courtesy of Tribune News Services.

The fact that Vick has even remained relevant at age 34 is a testament to both his character and play. He could have easily shied away from the limelight after being exiled from society due to his crimes, but he had the heroism to continue his career.

Vick could have retired after being benched for Nick Foles in Philadelphia but he was not satisfied with one example of redemption.

Signed this past offseason, by the Jets, Vick’s initial role was to mentor supposed franchise quarterback Geno Smith. Once Smith provided terrible against the Bills, Vick once again got a chance to add to a colorful resume as a starting quarterback

Vick fully supported Smith when Smith was the starter. Outside of a bad performance against the Chargers, Vick has proved competent when replacing Smith.

With a terrible Jets team, a declining skill set, and a nagging foot injury, Vick’s chances at succeeding are not high. Regardless if the Jets win or lose, the opportunity to start in New York gives Vick another chance to add to an already heroic story filled with plotlines of electric plays and beating the odds.

As the most polarized athlete, Vick is used to having the world watching him.Do not expect Vick to get rattled in the massive media market of New York. Instead, he will capitalize on the chance to remind people of his skills and add to his legacy. 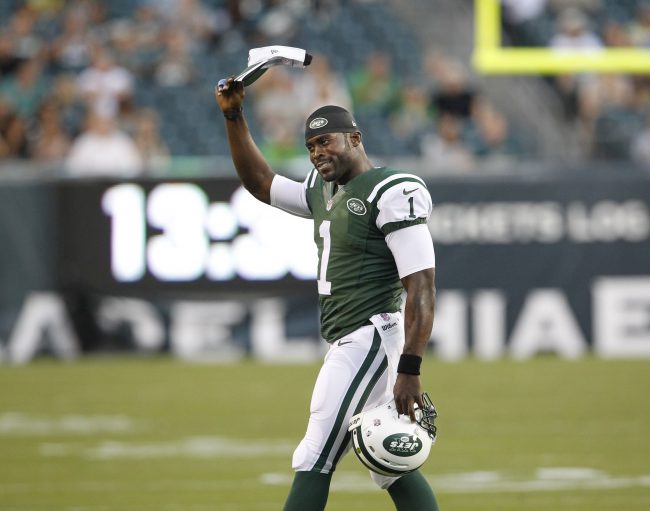 Despite his past mistakes, Vick should be remembered as a hero and the most polarized athlete of his generation. Photo courtesy of Tribune News Services.

Don’t get me wrong, I too am a dog lover. Vick’s philanthropic work will not erase the tragedies he did, nor will great play on the field.

Yet, after reading his memoir I understand that Vick was exposed to dog fighting as a young boy. It is not enough to erase his errors, but it is enough for him to be forgiven.

Considering he served his punishment, lost precious moments with family and jeopardized his whole livelihood, Vick should be commended for battling back when the world was against him.

No he is not the golden heroes Peyton Manning or Tom Brady are. He neither has the production or the trophy boy upbringing to be the heroes Manning and Brady are.

Rather, both Vick’s humble beginnings in Virginia and fall/rise from grace illustrate Vick as a real and flawed human capable of greatness, like all of us. His ability to defy the odds, on and off the field, are something we should all admire.