Women’s Basketball: Big West favorites face tough schedule in and out of conference 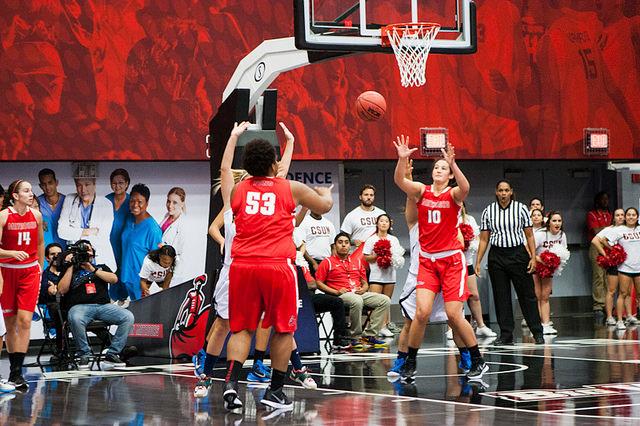 As the preseason favorites in the Big West Conference Preseason Poll, the Matadors were selected to repeat as conference champions, receiving 13 of the 14 first-place votes in October.

“Our goals this season are to win the conference and the Big West championship, and go to the Sweet 16 in the NCAA Tournament,” said second-year player Emily Cole “I know it’s going to be a lot of hard work but we can’t be content with being the team that we were last season. We have to keep pushing ourselves.”

“We’re going to work every day to be the best team that we can possibly be,” said CSUN Head Coach Jason Flowers. “We just go out and try to work as hard as we can every single day and get better every single day.”

“The conference has continued to get better every since I’ve been here at CSUN and I think there are a number of teams who could beat each other on any given night,” Coach Flowers said. “We’re concerned first and foremost about ourselves and how we work every day and approach our games. We respect all our opponents and everybody in the conference.”

The Matadors defeated The Master’s College in an exhibition game on Oct. 31, 90-56. CSUN opens the regular season on Nov. 14 against Idaho at 2 p.m. at the Matadome.

Flowers expects things to be different this time around, as the team matured during last season’s slow start.

“I think last year’s experience at the beginning not only helped us last season but I think it will help us with this group,” said Flowers. “I think the players that were able to go through it last year will share their lessons with the newcomers, so that we’re focused on the things (details) that help teams win.”

This year appears to be no different from last, as the Matadors play against some tough competition during the first two months of the season.

“Idaho is a really good team. They won back-to-back league championships and they’ve done things that we’re trying to do,” said Flowers. “Our focus is getting ready and preparing for Idaho.”

As easy it may be to overlook the Sacramento State game prior to heading to BYU, Coach Flowers feels the best way to go about preparing is by taking things a game at a time.

“Once the Idaho game is over– win, lose, or draw– the most important game will be Sacramento State,” said Flowers. “That’s just how we go about stuff.”

The coach expects the early season matchups to help his team get acclimated with one another and the system.

The Matadors will have a couple of winnable games against lesser opponents. Most notably Portland and Pepperdine, who had a combined record of (7-25) during conference play and (26-43) overall.

“We look at the preseason as a way to prepare us for conference and each team that we have in preseason creates different challenges in different shapes and forms,” Flowers said.

The most important thing the Matadors expect to gain from the non-conference matchups is exposure to different playing styles.