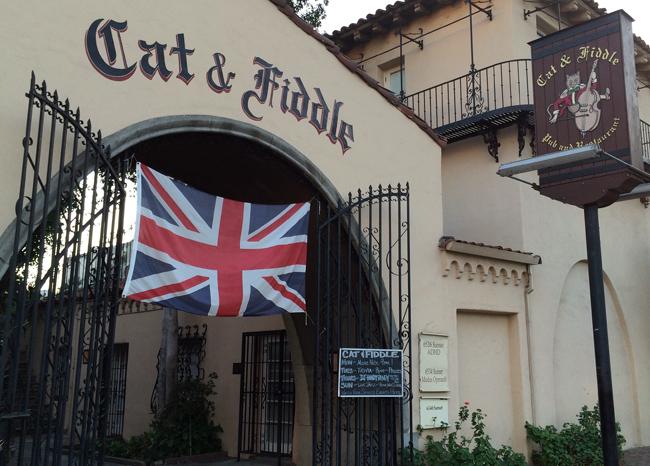 Famed Hollywood hotspot Cat & Fiddle announced in late October that they would shut their doors on its Sunset Boulevard location after 32 years, due to a lease dispute.

The news comes after a recent announcement by the House of Blues on Sunset Boulevard, saying the landmark venue would have to relocate by the end of 2015 to make way for a luxury hotel chain.

The famous seven acre, Hollywood hill, where guests of the Yamashiro restaurant could take in panoramic views of the city, also went on the market Wednesday, Curbed L.A. also reported.

“Hollywood, we are worried for your fate,” wrote Cat & Fiddle co-owners Paula and Ashlee Gardner on the restaurant’s Facebook page. “Overdeveloped & overpriced. Out-of-town landlords who are worried about their pockets and not their souls. It’s a sad place to be.”

Paula Gardner opened the first Cat & Fiddle on Laurel Canyon Blvd. in 1982 with her late husband Kim, a British musician who was the bassist in the band The Creation.

Due to popularity and space issues, they had to move a few years later to the current location on Sunset Boulevard. The venue, built in 1929 is rich in history and served as a set for several scenes in the classic film “Casablanca.”

“The Cat,” as it’s often referred to by regulars, is known as a token British-style pub that serves traditional English dishes like bangers and mash and fish and chip, that can be washed down with a classic Bass ale or Boddington’s on tap.

“I think I’ll really miss watching football here the most,” said Donald Goldus, a local patron referring to the European variation of the sport. “I watched the World Cup here this year. Everyone gathers on the patio, the Brits all cheer. They get the Americans excited and chanting. It’s great.”

The establishment revolves around the patio, with its courtyard fountain– a rarity for any property in Hollywood. The patio also serves as a perfect stage for music acts and has a lax policy on animal companions and outdoor smoking.

Known as a great venue for hosting themed parties, this year the patio made for a perfect backdrop for the Hollywood Forever Halloween event that encourages guests to dress as their favorite celebrity, alive or dead.

The most popular of all has been the annual New Year’s Eve party. However, there’s a possibility it may not occur this year, unless a new location is announced before closing in mid-December.

Prompted by the news and eager to help, five patrons of the restaurant who are independent from its ownership, started a Facebook page, “Let’s Save the Cat & Fiddle,” which received more than 2,800 followers in two days, and now stands at more than 4,000.

These volunteers started a petition titled “Committee to Save the Cat,” to present to the landlords in the hopes to negotiate fairly with the Gardners and reconsider the termination of the lease.

Unfortunately, the petition came up short and The Cat & Fiddle landlords responded via their attorney, stating that they were not interested in further discussion and already have a new tenant in the works.

Jesse Shannon, manager of the LLC investor group that owns the property, reported to Los Angeles Eater that because of the decision, he is getting endless personal hate mail which isn’t helping the situation.

“We have investors too,” Shannon said, explaining that the LLC determined after review of the restaurant sales. The Gardners wouldn’t be able to pay anywhere close to the market value for the property. Shannon also said the tenants were given six months to find a new location.

“The ‘it’s just business’ mantra is getting rather old,” said the committee. “Communities need more than businesses beholden to investors. Communities also need a sense of identity and the preservation of their own unique history.”

Ashlee Gardner, co-owner with mother Paula, said they’ve seen the city change over the years for better and worse. Gardner said while Hollywood has cleaned up a lot, there is still very little support for small business owners because council leaders focus on major developments.

Cat and Fiddle was one of the first British pubs to open in the Hollywood area in 1982. Serving as a platform for movie sets, parties, or simply hosting those who come in for football tournaments, the iconic venue, with it’s cool and lax environment will be missed by patrons and employees.

Though there has been no news about finding another location, the owners remain positive about the future of their business.

“Still homeless after December,” Gardner said. “The plan would be to move to another area that has more support for small businesses such as ours. Probably heading East!”

Cat and Fiddle will officially turn off the patio lights Dec. 15. If you haven’t made it over yet, do so before then to take in one last glimpse of the historical venue as it was.