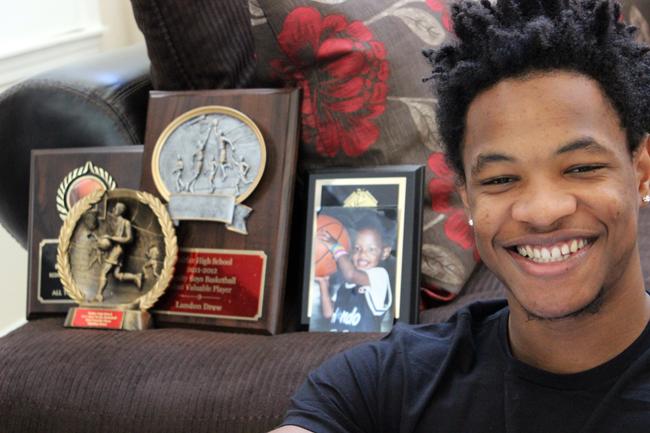 Landon Drew, junior, has found much success during his basketball career. Drew started playing at the age of four. During high school he won most valuable player twice and won plaques at the Redondo and San Diego tournaments. Photo Credit: Araceli Castillo/Photo Editor

A minute away from polishing off a stunning second-half claw back from 21 points against heavily favored Utah, CSUN men’s basketball found its precarious three-point lead in the hands of unheralded freshman Landon Drew, otherwise known as the son of former NBA head coach Larry Drew.

The Matadors possession, and their young point guard waited for the shot clock to approach single digits before initiating play.

Resisting a host of freshman miscues, Drew calmly recognized his advantage, sized up the switched big man and made haste to the basket. The resulting “and-1” clinched the game and immortalized the play in CSUN lore.

“I remember that I was trying to make a play, and I could hear him [former head coach Bobby Braswell] just yelling at me ‘Pass the ball, pass the ball,’ and I took the shot,” Drew said. “He didn’t say anything after.”

Shortly afterwards, he was made a starter, and has since grown into the trusted steward of an attack geared around the scoring of senior forwards Stephan Hicks and Stephen Maxwell.

“He’s a floor general; he pushes the pace,” said senior forward Devonte Elliott. “He gets us going. A lot of pressure is on him at the one spot. It can be difficult sometimes, but I feel he has it under control.”

Now a junior, players, coaches and even some in his own family are pushing Drew to be more assertive.

“I need Landon to push us, and I know he can do it, because there are times where he wills us in practice,” said junior center Tre Hale-Edmerson. “He keeps us calm, steady and on pace. We need him to be consistent every day, because if he’s consistent we’re consistent.”

Coaches and players describe Drew as a humble and reserved natural playmaker that constantly whets their appetite for more with occasional flashes of brilliance.

A cursory look at Drew’s statistics from the past two season shighlights a correlation between wins and assists. The team is 15-6 in games when Drew has five or more assists and 4-9 in games he scores in the double digits.

Schwartzberg warned that assists are a dependent stat and can be superficial marker of a player’s impact.

“If people are making shots, of course you’re going to win games,” said Schwartzberg. “If he’s being aggressive, looking for his own shot, he’s going to open things for himself and his teammates.”

Drew said he is prepared to heed calls for more assertion, but still contends that he is playmaker by nature and will not abandon his point guard duties in the search for shots.

“Practice is really important, because that’s where you see where you can get your shots,” Drew said. “Whenever we’re practicing, I’m making mental notes of who’s getting shots and where certain guys like getting the ball, and where I can get my own shots.”

“It’s a very delicate balance,” said Drew II. “We’ve been playing basketball since we were babies and we were taught the fundamentals and the right way to play early on while other kids were just running around and shooting. It’s something I’m especially working on myself. At this level, you have to show you can score.”

Drew’s father Larry, now an assistant coach with the Cleveland Cavaliers, watches all of his son’s games and is in constant dialogue with his son.

“I’m never too busy to make sure things are right with him,” said Drew.

He characterizes his son’s game as ‘old school’ and, like many in the program, hopes his son makes the jump this year.

“He’s always been a giver. As far as reaping the rewards, sometimes he’s a little too unselfish,” said Drew. “I want him to take control.”

Head coach Reggie Theus isn’t surprised at the elder Drew’s critique. Theus and he formed at backcourt tandem during their respective stays with the Kansas City Kings and Sacramento Kings.

“They’re very different,” said Theus. “Larry’s game was about speed. He was fast. Larry could really shoot the ball too. Landon is more of a playmaker than his dad. Larry thought about scoring a lot more.”

In personality they, draw closer.

“Dad grew up differently. Landon grew up not wanting anything,” said Theus. “That’s where Landon’s character comes in. He may have grown up that way, but his character is so strong that it keeps him playing hard. It keeps him doing the right things. He really is a coach’s dream.”

“Because of his name, he could have easily walked on at a lot of bigger programs, but he didn’t want to live on it,” Schwartzberg said. “He wanted to do it himself.”

Drew hopes his tenure lays the foundation for the program’s rise into national prominence.