Basketball Issue: Theus ready for anything in year two 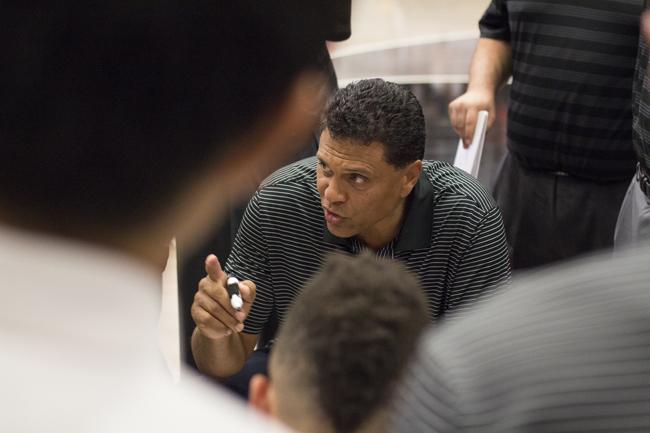 Entering his second year as head coach, Reggie Theus' experience as a NBA player and coach make him the ideal source for men's basketball players, on and off the court. Photo credit: Trevor Stamp/Senior Photographer

Being a person of integrity and an NBA player for 13 years has given him enough credibility for the players to trust and respect him.

With Josh Greene, third leading scorer from last year, graduating and heading to Italy to play for a Euroleague team, men’s basketball Head Coach Reggie Theus wanted to be there for him.

He took time out of his weekend to be there for Greene, congratulating him for a new chapter of his life.

“He’s very humble. He cares,” Lior Schwartzberg, director of basketball operations said. “He went there to be with his family. He went out of his way to be there and he spent a good three or four hours there.”
“It’s not like he read this in the textbook.” Schwartzberg said. “He has done it and has seen other people do it. He has coached Divison II basketball, coached Division I basketball, coached the Sacramento Kings. The fact that he has done it all and has been successful, the players believe in him.”

By playing against the likes of Michael Jordan and Larry Bird, by being on the same team with players like Spud Webb and Dominique Wilkins, playing under Jerry Sloan and Bill Russell, and coaching under Rick Pitino, he has done it all and seen it all.

“I have a lot of ‘street credit’ as they would say,” Theus said. “Walking in the door, players already know that I know what I’m talking about. Not only have I coached it, I’ve done it myself by guarding Magic Johnson and Jordan, by being on the floor with Dr. J and George Gervin and by having conversations with Bill Russell.”

After a six-year hiatus from college basketball, Theus came back to college basketball after stints with the Minnesota Timberwolves, Sacramento Kings and the Los Angeles D-Fenders of the NBA Developmental League.

“I learned a lot from coach Pitino about running a program and how he handled his staff and his players,” Theus said.

Besides Pitino, Theus said he learned a lot about different styles of play by both coaching and playing at the NBA level.

The players on the team are on board with Theus and one player talks about how much he has grinded them during practice.

“He’s trying to get everything out of me,” senior guard Stephan Hicks said. “He doesn’t want me to just cruise, but he wants me to go hard everyday, working on my game.”

Another senior player, forward Stephen Maxwell, said that Theus has boosted his confidence and Theus’ past experiences in basketball is helping the team.

“During preseason, he does something called NBA training camp for the first week,” Maxwell said. “We do a whole bunch of drills that the NBA does; drills to better our agility, conditioning and a lot of shooting. He has a NBA mind and he’s very intelligent.”

As Theus looks forward to this season, he emphasized that the team is going to have to play hard, and they will need cohesion to accomplish the team’s goals of making it to the NCAA Tournament.

“I always take on a team and never talk about winning or losing,” said Theus. “What I talk about most is getting guys to play a certain caliber of basketball.”

Theus’ philosophy on basketball revolves around playing hard. He wants players to not only get to the rim but have an attitude too.

”I believe if you respect the game in that way, the wins will take care of itself,” Theus said.