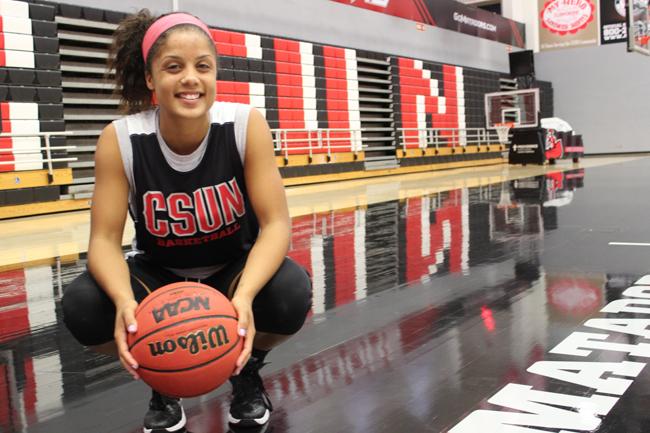 Ashley Guay, senior, played all 33 games of the 2013-2014 season. Guay became the first player in the Matador program to be named conference player of the year. She has set many records from having the most steals and assists. Photo Credit: Araceli Castillo/Photo Editor

After leading the CSUN women’s basketball team to the 2014 Big West Championship, Guay stormed into the record books, becoming the first Matador to win the 2013-14 Big West Player of the Year award and was named the Big West Tournament MVP.

Entering high school at the Academy of Our Lady of Peace, where her father was coach of the basketball program, Guay juggled both soccer and basketball her final two years of high school.

“I started playing when I was five-years-old,” Guay said. “I played basically every single sport growing up, but my two main sports were soccer and basketball.”

Entering her junior season, Guay stopped playing soccer because was it was difficult to balance.

“I had to choose one to try and be seen by certain colleges,” Guay said.

Head coach Jason Flowers remembers the moment he set his sights on Guay, knowing that she was the kind of player he envisioned on his roster.

“It was one of those deals that you know it was just meant to be,” Flowers said, who already had two early commitments to the team, but flew out to Vegas to scout the guard. “Obviously I knew she was the daughter of a coach, so I knew there were certain intangibles that came along with that.”

The apple never lands far from the tree, and Guay’s tendency to act as field marshal is a unique quality that spreads throughout the whole team.

“When I got to high school, having my dad as the coach was really beneficial to me as well as my team because I was able to understand what he was trying to say and then relate it to my team so they could understand it as well,” said Guay. “That led me to a bigger leadership role and understand basketball more.”

The main ingredient, according to Flowers, is Guay’s basketball IQ.

“She asks questions that some of our other kids, might not even think of,” Flowers said. “A lot of times she is an extension of our coaching staff out there because she thinks the game within the game.”

It hasn’t just been her knowledge of the game that’s brought her recent success, but her uncompromising desire to win on the court and off the court.

“She just wants to win at everything,” Flowers said, describing Guay’s contagious winning mentality. “There are a couple instances where we ended up on opposite teams in different things and she wanted to beat me just as much as anyone else.”

Lindsey Foster, associate head coach, said it’s a combination of things when it comes to explaining what set Guay apart from the rest last season.

Aside from her physical attributes like speed, Foster said Guay’s relentless attitude and leadership qualities make her stand out.

With a swan song season rapidly approaching for the high-flying senior, Guay has her sights set on repeating last year’s performance level.

“With the returning people that we have that were on that team last year and know what it takes to get there, we are fully capable of doing that again.” Guay said.

Looking forward after the season, the child development major and Spanish minor has plans to put both of her skills to work.

As Guay and the rest of the team get ready for the approaching 2014-15 season, individual accolades aren’t as important as regaining the form that saw them take the Big West Conference last year ­­— a feat that Guay thinks they can repeat.

“We just have to stay on the same page, work harder than we did last year and not let up,” she said.