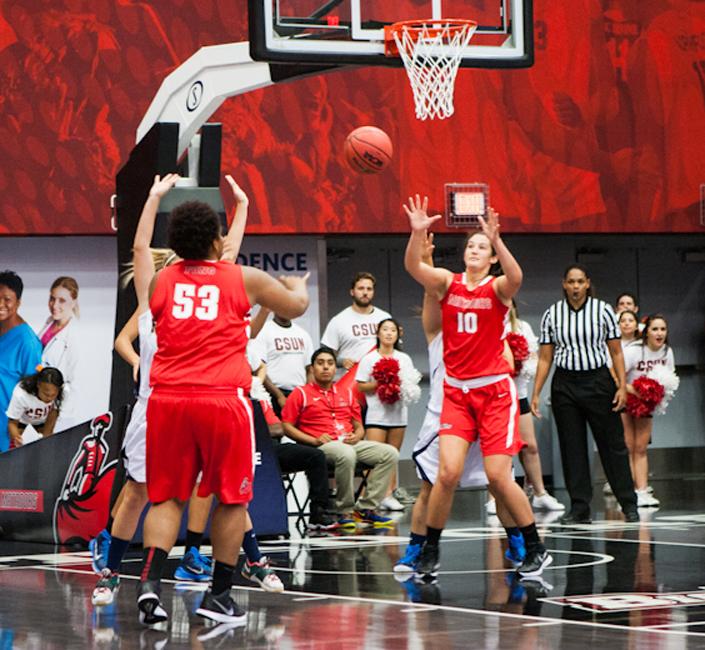 The women’s basketball team come into the 2014-15 season with an experienced team and a promising bench after a successful year that included a Big West Championship and a trip to Seattle for the NCAA Tournament.

“I’m excited about the possibilities of this team, but only time will tell,” Matadors head coach Jason Flowers said.

The team adjusted their game to take the title and shutdown problem opposition after a patchy start to the regular season.

Adjusting their offense and defense in Anaheim at the Big West championship, the Matadors were able to knock off Cal Poly and the UC Irvine, with UCI being the most problematic over the regular season.

CSUN took the game and moved on to play Cal Poly, who lost 73-58 to the Matadors and went home second in the conference.

CSUN moved onto the NCAA Tournament as a No. 16 seed where their season ended in the first round in a loss to the No. 1 seed South Carolina Gamecocks.

Flowers attributed the loss to failing on rebounds, and the sheer height of the opposing team.

“Obviously, they had some bigger players,” Flowers said. “I thought the kids embraced the big stage very well.”

Regardless, the Matadors still proved a tough team for the prestigious Southeastern Conference team.

“You take the good, you take the bad, and you put it in your back pocket and keep it for motivation,” Flowers said.

This year, the Matadors added new recruits and eligible redshirts. Freshmen Tessa Boagni and Caroline Gilling both stand at 6 feet 2 inches and will be key on the offense.

Boagni’s versatility will set her up as a post player and will come in handy for the Matadors, Flowers said. Gilling, who described herself as a shooter, is a change of pace for the Matadors’ small guard setup and offers the same type of versatility as Boagni.

Former redshirts Travis Newman and Katelin King will be eligible for play this year.

Newman said she was able to learn a lot about the program after watching last season from the sideline. She said the team needs to lock in on defense for the team to reach their goals this season.

“All five on the court, no matter who they are, need to play as a unit,” said Newman. “Knowing that our focus on defense will ultimately determine our success.”

All of CSUN’s players are eligible this year, excluding transfer student Serafina Maulupe, expanding depth off the bench.

Flowers said more eligible players adds to the team competition, which is key to a good team. If others prove capable of starting this season, then adjustments will be made to the starting lineup.

As for what they will face and who they are watching in the Big West Conference this year, Flowers isn’t targeting any specific teams. Last season’s rivals in Cal Poly and UCI won’t be much of a problem, with much of their team graduated. The Matadors on the other hand, have all their starting lineup returning.

Seniors Ashlee Guay and Camille Mahlknecht, who received Player of the Year and Defensive Player of the Year awards in the Big West, respectively, will be back. Forward Randi Friess and guards Cinnamon Lister and Janae Sharpe, who proved solid offensive players last year, will return as well.

But next year the Matadors will be losing all of their starting lineup and Flowers isn’t avoiding that looming fact.

“It’s the elephant in the room,” Flowers said.

For now, with a winning team that has proven its resolve, Flowers said that the game plan is steady.

“This is the first season, from a basketball standpoint, where we haven’t made an overhaul to what we did,” Flowers said. “I think we’ve settled on what is we need to do on both sides of the court.”

The Matadors outplayed and shut down Master’s College 90-56 on Oct. 31 in an exhibition and their first action of the season.

As for what the Big West will offer, Flowers isn’t cocky about the status of his team.

Flowers said that the Big West is unpredictable and that there are several teams who could take the championship this year.

“I like our team,” Flowers said, who’s aware of his team’s experience and talent and the unpredictable season.

The coach is instead worried about the day-to-day performance of the team and making sure their best game, is their next game.

CSUN will play open the season against the University of Idaho Vandals Nov. 14 at the Matadome.