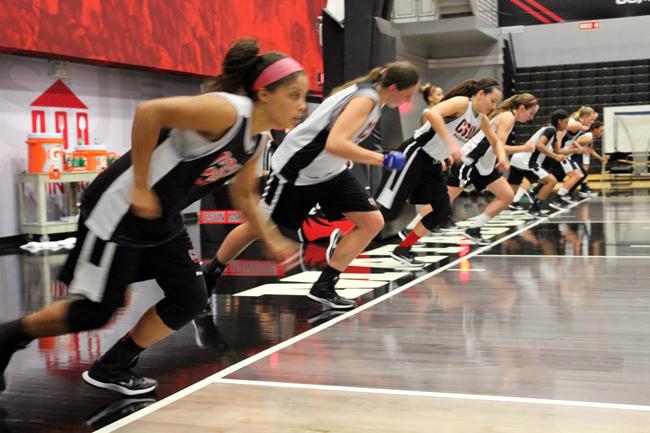 The Matador women's basketball team has new additions to the team including recruits. Based on last seasons good and bad moments adjustments have been made for an even stronger team. Photo Credit: Araceli Castillo/ Photo Editor

The women’s basketball team received some promising new talent over the summer that head coach Jason Flowers believes has the potential as well as the basketball IQ to make a difference in the long term.

Among the new recruits are players with impressive basketball backgrounds that could shine for the Matadors next year when all the current starters graduate.

“I’m excited about how they come together as a group,” Flowers said. “I’m excited to see how much this team can grow.”

The Matadors have boosted their ranks with two international players that both stand 6 foot 2 inches and show potential on the offensive.

Incoming freshman center and New Zealand native Tessa Boagni is from a family that includes a father who played at the UC Irvine and Kansas University, before being drafted into the Utah Jazz.

The 18-year-old journalism major played basketball and volleyball at New Zealand Secondary School before leaving to join her father in Los Angeles and the Matadors.

Boagni expressed excitement for playing on a Division I team and said that it is a step up from her high school days.

“This is probably the most talented group I’ve played with,” Boagni said. “The level in New Zealand is probably (not) as good here.”

In the 2014 exhibition game against Master’s College, Boagni played 23 minutes, landing a shot in the paint and four out of six of her free throws.

“It was my first taste of American basketball,” Boagni said. “It was just so different because I never played a game that was that intensive.”

The 6-foot-2-inch center plays post for the Matadors and matches senior center Camille Mahlknecht in height.

But Boagni isn’t the only international player to debut on the Matadors this year, nor the tallest.

Like Boagni, Gilling comes from a basketball family that includes a brother at Arizona State University and a sister at the University of Washington.

Gilling landed three shots from downtown and four shots in the paint against Master’s College.

In addition to adding promising freshmen, the Matadors have taken in a player with college basketball experience.

Sophomore Serafina Maulupe enters as a redshirt sophomore and will sit out a year due to NCAA transfer rules.

“Serafina is a tough kid,” Flowers said. “She reminds me of the small guards we have now.”

Maulupe spent the 2014-15 season with the Virginia Tech Hokies and Flowers is confident that her experience in an Atlantic Coast Conference team will pay off for CSUN.

“She’ll step into a role next year where she will be one of the few experienced ball-handlers,” Flowers said.

The Matadors also received freshman Tiarah Umu over the summer, but due to a concussion suffered in exhibition play, she will no longer play contact sports at the doctor’s request.

“It was her third concussion,” Flowers said. “She started as a track athlete so she’ll go back.”

Despite this loss, CSUN still has plenty of talent to pull from, and last year’s redshirts will be eligible for play this season.

Junior guard Travis Newman was a transfer last year and sat out the 2013-14 season.

“She is versatile,” Flowers said. “She can do so many different of things.”

At six feet, Newman carries on the trend of adding tall players capable of playing all areas of the court.

“She’s a bigger guard, obviously bigger than the three smaller ones we got,” Flowers said.

Katelin King will also be available this season. Past injuries kept the freshman guard out of the 2013-14 season, but she is anticipated to make a key contribution to the Matadors this year.

“She is a great basketball player. She is a coach’s dream,” said Flowers. “Just a great kid.”

With all the new eligible talent and prior players at CSUN’s disposal, Flowers said it helps create a healthy competitiveness among the team.

As far as how Flowers will apply this new talent and whether they will start or not, it is up to them, Flowers said.

“You get what you earn in our program,” Flowers said. “If those kids continue to earn the right to be starters, then they’ll start.”