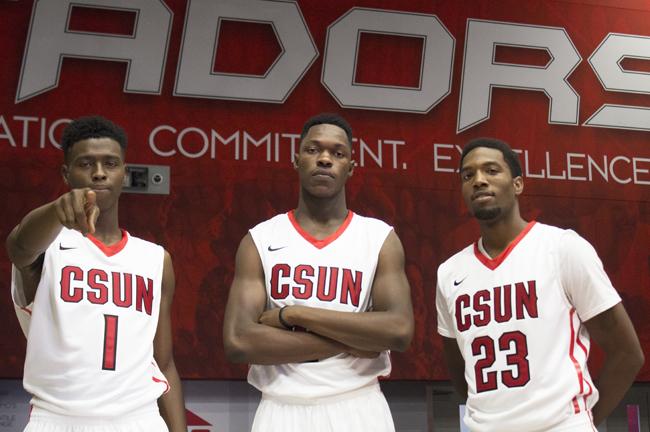 Eight new faces are in town for the men’s basketball team as they get ready to face a new season.

After coming very close to a Big West Title and a berth to the NCAA Tournament last year, all of the freshmen have one thing in mind: to bring a Big West Championship to CSUN

Four of them are from California. However, the other four are from the east coast, which is rare for any Big West team.

Warren and Faulkner are from Washington D.C. and were teammates when they were in high school. Wilbut is from Chicago and Douglas is from Maryland.

Coach Reggie Theus said the freshmen are talented and expects continuous effort on the floor.

“All the (freshmen) are long and athletic,” Theus said. “Each of them have a different type of skill set which gives us an opportunity to utilize more bodies. They face a learning curve but should be able to contribute.”

Theus said after the Nov. 8th exhibition versus the Cal State Dominguez Hills Toros that the team is young and he might have to stick to their starters playing a big majority of the game.

During that game, only three freshmen had playing time: Webb with 13 minutes, Douglas with 10 minutes and Efferson with two minutes.

“A lot of these guys are young so they don’t know basketball yet,” Lior Schwartzberg, director of basketball operations, said. “They haven’t tapped their potential yet and this year is about helping them find that potential.”

Theus was named one of the top 25 recruiters in the nation by Rivals.com during his tenure as an assistant coach at the University of Louisville, and the freshmen are excited to play for a coach with such a full resume.

“He’s very player-understanding because he played in the NBA,” Dawson said. “He knew where I was coming from so he could relate with me.”

Theus said he expects “1000 percent” from the freshmen on and off the court and that they will all have to come in and play at a high level in order to be successful this year.

“As a freshman, I want to be learning as much as I can and be positive,” Faulkner said. “Off the court and on the court, I want to be a positive example for other teammates.”