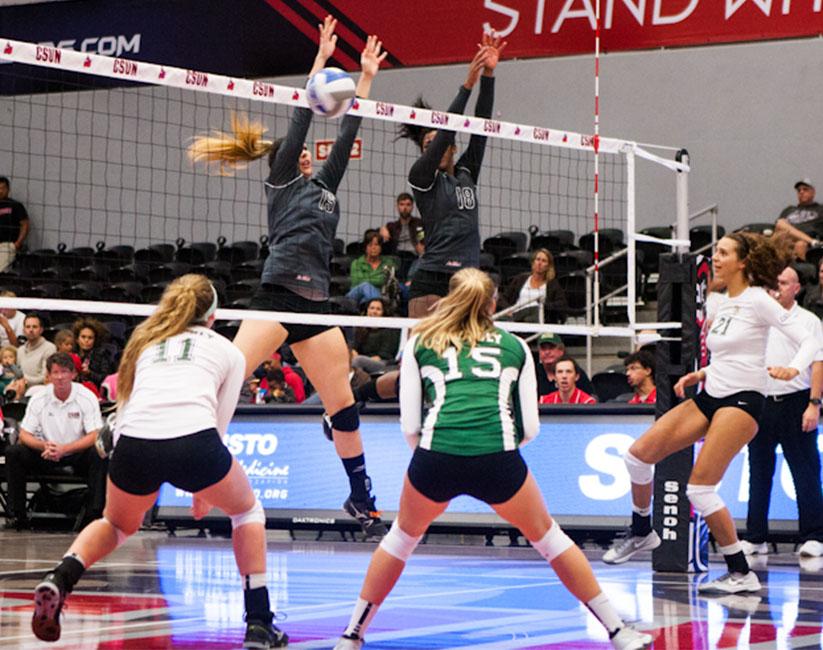 On Friday night, the Matadors took to the Matadome to defeat the UC Santa Barbara Gauchos in a 3-set sweep.

Senior middle blocker Casey Hinger and junior outside hitter Danetta Boykin led the team with 13 kills each and had the similar goal of sweeping UCSB.

“To be honest, we kind of have a chip on our shoulders about Santa Barbara,” Hinger said. “For them to come into our house, we were like ‘no, we are going to take care of business’.”

Hinger also put up four digs, three blocks and two aces while Boykin served two aces of her own.

“We kind of got into a rut mid-season but we got out of it, we had a lot of team meetings and we worked really hard at practice,” Hinger said.

The Gauchos put up a fight in the first set as they were able to close up the Matadors’ initial lead and tying the score 23-23.

UCSB looked like they would end up taking the set after their kill put them in the lead 24-23. Boykin followed up with two consecutive kills that would allow the Matadors to take the set at 26-24.

Set one gave the Matadors the confidence that they needed in order to dominate set two. At one point, the Matadors maintained a 12-point lead (23-11) and ultimately took set two at 25-15.

The third and final set was reminiscent to the first as the Matadors immediately took the lead (16-10) until UCSB began to tighten up their lead (23-21). Hinger and Boykin made sure that their shortened lead would not prevent them from sweeping the Gauchos as they ended the set with a kill each (25-21).

The Matadors will be ending their two-night homestand with a match against Cal Poly on Saturday, Nov. 15 at 7 p.m.

Hinger says that the Matadors plan on bringing the same energy as they did against UCSB.

“We’re going to watch video on Cal Poly, so our defense and our blocking will kind of shift based on what they do,” Hinger said. “Besides that, it will be the same energy and same Northridge play.”