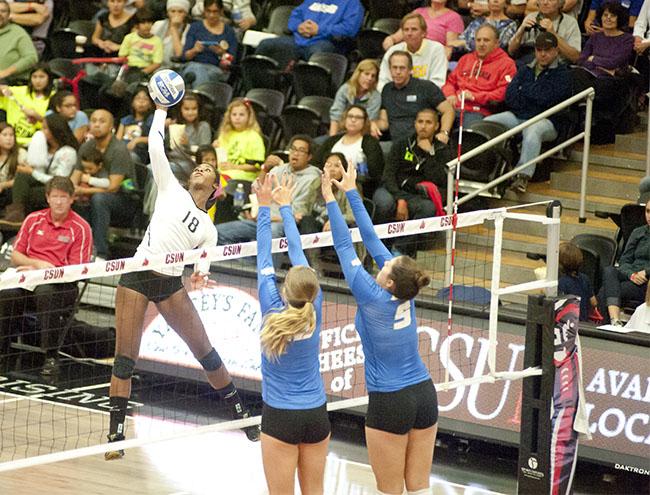 This win makes the second consecutive sweep for the Matadors (16-8, 7-5 Big West) after they defeated UC Santa Barbara.

These past two games were important for the Matadors to win so they can have the eligible standings to compete in the upcoming NCAA tournament.

“We have been practicing so hard these last few weeks so it was pretty much all or nothing,” Boykin said. “We knew that if we were going to lose, our chances of going to the NCAA tournament were over.”

Junior outside hitter Danetta Boykin led the Matadors with a match-high 17 kills, a hitting percentage of .500 on 28 attacks, four digs, two blocks and one ace.

The first set was a complete Matador game as they were able set the pace from beginning to end. At one point, the Matadors were able to set a 10-point lead that, after an ace by Randazzo, would allow them to take the set at 15-25.

Set two had a different flow to it as both teams went point-for-point for the majority of its duration. The score had been tied eight times throughout the set until Cal Poly took the lead (12-10).

A Cal Poly kill and an error by the Matadors tightened the lead at 20-24 but, thanks to one of Boykin’s 17 kills, the Matadors were able to take the set 18-25.

The Matadors set the tone for the third and final set just as they had done in the first. The Matadors were able to accomplish a nine-point lead (12-21) at one point but Cal Poly continued to fight to cut the lead down (16-22).

The Matadors ended up taking the set at 16-25 after kills by Hinger and Boykin and an error on Cal Poly’s behalf.

According to head coach Jeff Stork, being at home, sticking by one another and looking after each other’s backs played a big part in the Matadors’ success.

“They played with purpose,” Stork said. “I saw a very focused and determined team. We are playing at a high level that’s fun to watch and fun to coach.”

The Matadors are set to head back on the road to play against UC Riverside on Thursday, Nov. 20 at 7 p.m.

After the UC Riverside match, which will be televised on ESPN 3, the Matadors will only have three more games to compete in before the NCAA tournament begins on Thursday, Dec. 4.