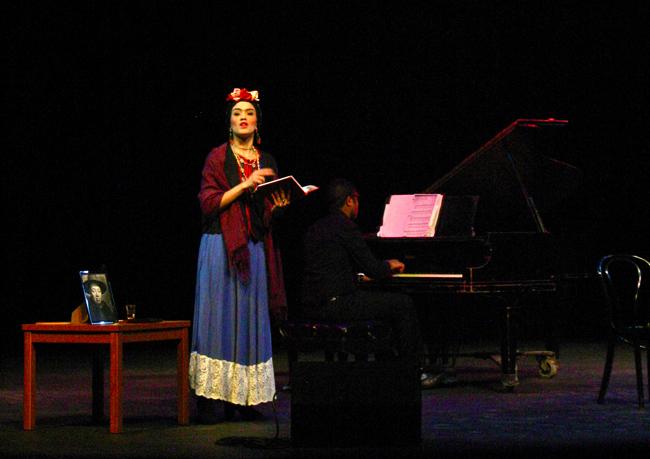 Tears run down the face of a young Salvadoran woman wearing a blood-stained white dress as she crouches despairingly in the jungle outside her home village of El Mozote.

Silently, she holds back sobs as she wipes away the tears shed at the loss of her husband, son and three daughters. The thought of her lone surviving daughter Fidelia brings hope for she too, like her mother, escaped that deadly day.

As the sole survivor of the 1981 El Mozote massacre, mother and peace activist Rufina Amaya’s tale of survival served as a powerful performance.

Actress Cristina Isabel Lucas played and sang the varied roles of Kahlo, Storni and Amaya in a difficult solo performance backed only by minimal props and the musical stylings of pianist Byron Sean.

Combining a rich blend of theatrical narration and musical performance, the award-winning Core Ensemble celebrates journeys like Amaya’s with their performance of “Tres Vidas” during CSUN’s first Latin American festival.

Sponsored by the Center for Mexico and Latin American Studies (CMLAS), the College of Social and Behavioral Sciences, the Department of Central American Studies and several other departments, the festival highlights the artistic offerings of the region with five days of free events held throughout campus Nov. 12 to 16.

The unique format of the performance created by the Core Ensemble earns acclaim as its own genre within the chamber music world, combining a wide stylistic range of music and narratives with multicultural themes to portray real historical figures.

The Core Ensemble usually consists of a solo actor or actress accompanied by an onstage musical trio, but their performance of “Tres Vidas” on Thursday evening saw a more minimalist approach with a solo actress backed by a lone pianist.

Beginning the program with Mexican artist Frida Kahlo’s story, Lucas captures her spunky personality while shooting tequila from a nightstand adorned by a picture of her passionate lover, fellow artist and painter Diego Rivera. Moments of seriousness break her generally funny character providing needed clarity for getting the historical relevance across to the audience.

A brief intermission followed the Kahlo story, allowing Lucas a quick change of garb and character before moving into the Amaya portion of “Tres Vidas.”

While the Amaya story proved to be the most powerful story of the trilogy, its placement in the middle of the program came too soon and shadowed her later performance of influential Argentine poet Alfonsina Storni.

Despite finishing with a slightly less gut-wrenching tale, Lucas still captured the unsure nature of Storni in the final hours before committing suicide.

“Tres Vidas,” despite the minimal nature of its performance, rose above the mundanity of the bare stage on the wings of Lucas for an enlightening glimpse into the three lives of these captivating Latin American women.