Assassins Creed: Unity is nothing new for fans of the series 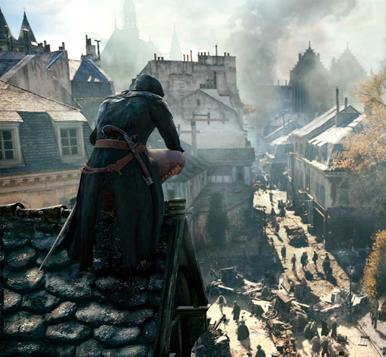 “Unity” is one of the most ambitious games I have ever played, but that ambition is what keeps it from fulfilling its promise of being truly “next-gen.”

Set in France during the French Revolution, gamers play as Arno Dorian, a young man who uses wit and brawn to hide the fact that he is a one-sided character. Not to say he is bad, he has some entertaining scenes with the character, Élise, but the potential he has for growth is squandered by a simple revenge tale that doesn’t really add anything new to the formula.

Once again, the Assassin v. Templar feud takes center stage and has some intriguing tweaks to the story, but not enough to merit a second play-through. The story is also hindered by the lack of interesting characters.

Besides Élise, the rest of the characters are largely forgettable. This is not the weakest “Assassin” storyline to date by far, but it fails to deliver a great start to the new generation.

One of the game’s ambitious goals pays off in a huge way: the living, breathing recreation of Paris during the French Revolution. This immense playground is sprawling with side missions and objectives to keep one busy well after the campaign ends.

Even though on console the resolution is set at 900p it is impossible to deny the beauty of the graphics, especially during the cut-scenes and during movement.

“Assassins Creed” never disappoints with their choice of locale, and Paris is no exception. Unfortunately, like all other aspects of the game it has its fair share of problems. Due to the density of the crowd, it is almost impossible to traverse on the ground without falling over. This is especially a nuisance on the tailing missions, though they are few and far between.

However, Ubisoft makes up for it with the newly added “Parkour down” move, which allows Arno to traverse both up and down the buildings fluidly.

Then there is the combat in the game, which is basically the same system fans have been used to since the first game. The only difference is that the enemies are much more challenging now.

One can quickly become overwhelmed if they just rush in to an area without a strategy. This can become frustrating since the difficulty fluctuates so wildly amongst the enemies. But it offers a sense of strategy that past games were missing.

Then there is the multitude of weaponry available that keeps the combat from becoming too stale too quickly. That vast array of weaponry leads to the next new feature of Unity: a challenging and rewarding customization system.

A new level of personality is added to the game as Ubisoft ushered in microtransactions, yet  they can become a nuisance since some users can pay their way to get the best armor. But these customizations come in handy when dabbling in the co-op multi-player, which is easily the best feature of Unity.

Yet all of these highs and lows are out shined by the sheer amount of glitches and bugs that plague the experience. From the frame-rate dipping below 20 frames per second, Arno falling through the floor itself, corrupted save files and game crashes, it seems the game was barely tested before launch. There have been a slew of complaints and reports of these types of issues and they certainly hinder the good parts of the experience.

“Assassins Creed: Unity” is a game that would have benefited if it was prepared with more time. While the story is weak, the world allows opportunities to make your own fun and the co-op is a breath of fresh air.