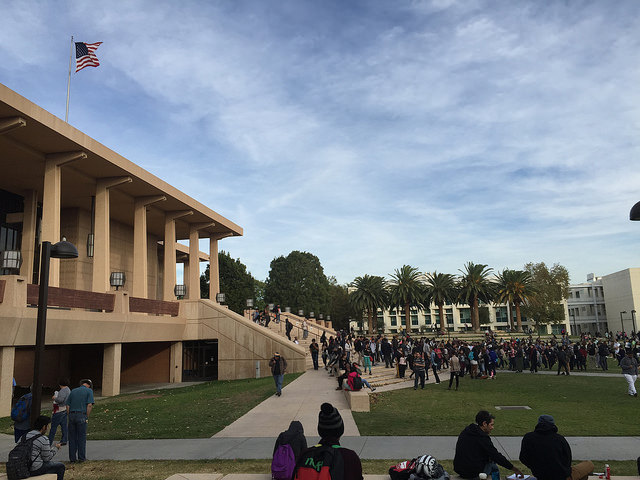 The Oviatt Library was evacuated briefly Monday afternoon following a fire alarm. Students returned shotly after it was determined the building was clear. David Hawkins / The Sundial

A smoke alarm inside Oviatt room 457 went off around 3:15 p.m. and officials removed all occupants within three to five minutes to a safe distance from the library.

“We take every alarm seriously,” Interim Associate Dean Lynn Lampert said. “We can’t tell from the panel if it is an actual fire or a malfunction.”

No smoke or signs of an electrical fire were found upon inspection, said Mike Villalobos, CSUN guest services supervisor.

CSUN liberal studies major Danielle Gonshor was on the third floor taking a test when she got the signal from officials to evacuate the building.

“We were frustrated. I couldn’t finish my test because time was up,” 23-year-old senior Gonshor said. “We had to email the teacher.”

Gonshor said that they were not notified as to why they were being evacuated, just instructed to leave the building using the stairs.

“They didn’t give us any other information” Gonshor said. “I think they make it really serious over here – too serious.”

Last month, an elevator motor short-circuited causing smoke to spill into the basement and garden level of the library.

Lampert said that faculty and staff have been doing a lot of evacuation drills, and that Monday’s evacuation was successful.

“It was very orderly,” Lampert said. “Our plan was pretty well vetted.”

No injuries were reported.

Stay with the Sundial for updates on this story.