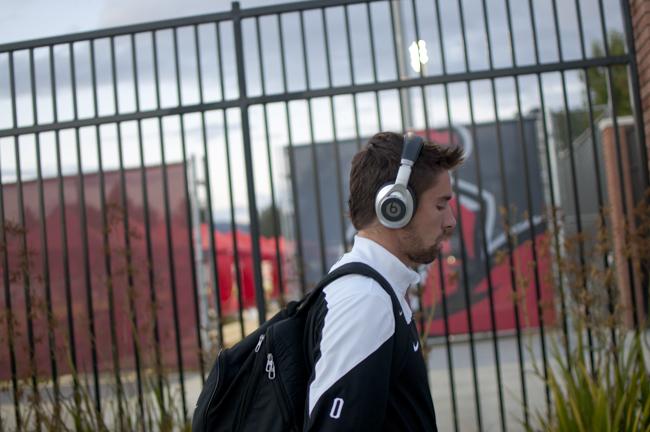 Hobbs listening to his favorite song, "In your arms," by Michael Woods while walking to the field prior to the game.

There is only one man between the ball and the goal, and that man is Adam Hobbs, the Matadors’ junior goalkeeper.

The 21-year-old transferred from Humboldt State, a Division II school, to play starting keeper for the Matadors. At the conclusion of the 2014 season, Hobbs will be a senior with hopes of entering the playoffs during postseason in 2015.

After having breakfast, Hobbs begins his game days stretching and watching soccer before listening to music and entering his zone. videos. The soccer player comes from a lineage of soccer players.

He attended El Segundo High School where he played soccer and football as a placekicker. His younger sister is now attending El Segundo and is on the girl’s varsity soccer team where their father Antony Hobbs is the head coach of the team.

Antony Hobbs is originally from is from London and has played semi-professionally in Europe. Hobbs volunteers by assisting his father in coaching the girl’s varsity team during the Matadors off-season.

The younger Hobbs enjoys reading David Beckham’s autobiography and likes one particular photo for inspiration, a shot where Beckham made a penalty kick as the ball flies past the goalkeeper’s fingertips by inches.

Hobbs spends time with most of his teammates and friends in the soccer community at CSUN.

While Hobbs is not playing soccer, he attends several sporting events supporting all the Matador athletics teams with his teammates including Kevin Marquez who is seen with Hobbs most often.

His top three favorite goalkeepers are, Peter Schmeichel, Edwin Van Der Sar, and Manuel Neuer who he looks up to as role models by studying their strategy in their games around the world.

Hobbs enjoys the benefits of having a dual citizenship and has future goals of pursuing a career in playing professionally by starting on a semi-professional team in England upon graduation.

Hobbs said, “I would definitely want to play for Manchester United… that would be