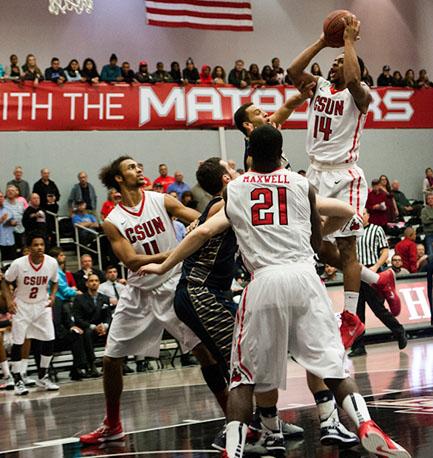 After Stephan Hicks missed all of his field goal attempts vs. the No.2 Arizona Wildcats on Sunday, Hicks and the CSUN Matadors (1-2) were on a mission vs. the Montana State Bobcats (0-3).

The Matadors pulled out a 72-65 victory over the Bobcats at the Matadome in CSUN’s home opener Wednesday evening.

Hicks led all scorers with 23 points with nine of them coming from the charity stripe.

Elliott redshirted last year when he was forced to sit out the season per NCAA regulations after transferring from Nevada.

“I got into areas I need to, to be successful,” Elliott said. “I talked with Coach Reggie Theus today and he wanted me to just get into areas that I’m comfortable with.”

As a team, the Matadors had 12 blocks led by Elliott with five and junior center Tre Hale-Emerson with four.

After starting slow vs. the No. 16 San Diego State Aztecs and Wildcats, both resulting into losses, the Matadors started quick.

The Matadors started the game on a 19-3 run with Hicks scoring nine of the points.

Montana State did not score its first field goal till 7:28 when Marcus Colbert banked in a three pointer over the outstretched arm of freshman guard Taelin Webb.

“It was because of our defense,” Theus said about starting on a run. “For the first five minutes, I actually didn’t even stand up. I just let them go because they were doing what they needed to do defensively.”

The Matadors did not trail at any point during the game. They led by as much as 18 points during the first half with 3:37 left.

During the second half, the Bobcats had a run of their own. They went on a 8-2 run that cut the deficit to 8 with 12 minutes left.

The Bobcats cut the lead to five with 19 seconds remaining after Stephan Holm hit his fifth three pointer.

However, two three pointers by Hicks and a turnover which led to a Hale-Edmerson layup that sealed the deal.

The Matadors continue the EA Sports Maui Invitational Mainland Challenge this weekend as they face Samford at Little Rock, Arkansas on Saturday Nov. 22. Tipoff is scheduled for 11 a.m.