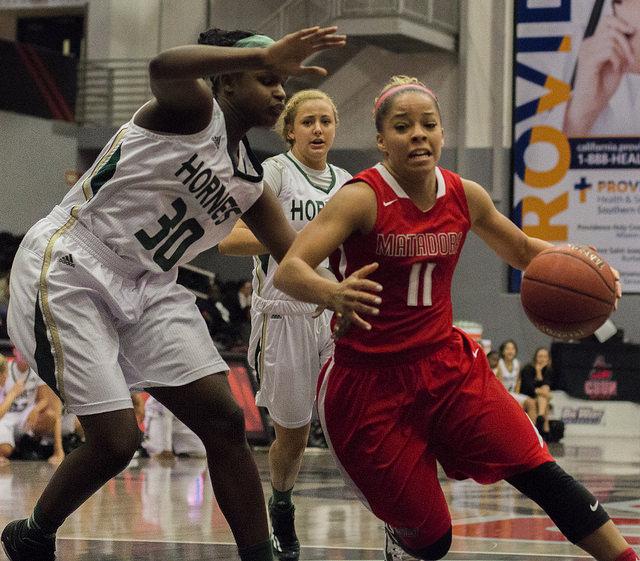 The Matadors remain undefeated for the season and racked up a three-game winning streak after beating out the Brigham Young University Cougars 63-54 Wednesday in their first away game for the season.

The Matadors secured 48 rebounds and shot perfectly from the free-throw line to defeat a fellow conference champion Cougars for the first time in program history, according to Go Matadors.

CSUN fell behind BYU shortly after the opening tipoff but with consistent shooting from senior guard Ashlee Guay, they managed to close the half with an 11-point lead.

The rest of the game BYU struggled to close the gap and came within three points at 7:32 in the second half, but the Matadors followed through with free throws and layups.

The last few minutes, BYU’s Morgan Bailey pushed with shots from within the paint, but consistent free throw shooting from Guay kept them from mattering.

BYU has so far lost both of its regular season games this year, showing a bad turnaround from an impressive 2013-2014 season where they made distance into the NCAA tournament.

Cougars play in the slightly higher ranked West Coast Conference, where they secured the championship last year and made it to the third round of the NCAA tournament. They were defeated by the University of Connecticut Huskies, who then went on to take the 2014 NCAA championship.

Against CSUN they shot at a higher percent 38.2 percent, compared to the Matadors 33.3 percent, but only snatched up 31 rebounds and landed a little more than half of their free throws.

The Matadors, on the other hand, made an impressive 100 percent of their free throws for the game, despite a poor overall shooting average.

Guay came in for the Matadors, shooting 19 points for the game and freshman center Tessa Boagni put 10 points with 7 rebounds.

With this victory over BYU, CSUN remains undefeated for the three games they’ve played this season.

CSUN will play their next game at the Matadome against the University of Portland Pilots. The Pilots were shot down by the University of Nevada, Las Vegas Rebels in the quarterfinals of the West Coast Conference tournament.