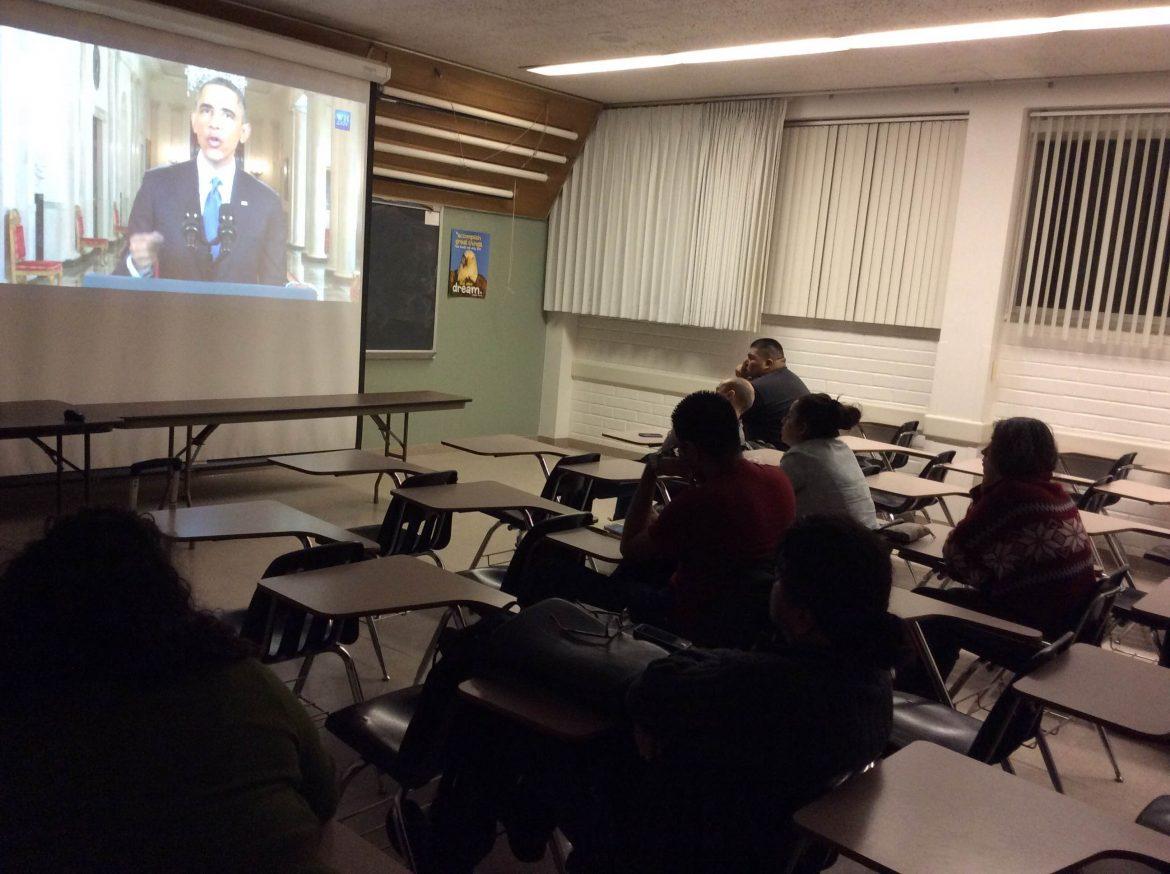 CSUN students gather in a Sierra Hall classroom to listen to President Barack Obama outline his policy for immigration reform in the United States.

In his speech, broadcast nationally, Obama outlined a three-pronged approach of an executive action he says will reform immigration policies in the United States.

The executive action, Obama says, comes as a result of his frustration with the Republican party to pass legislation so as to allow up to 5 million undocumented immigrants in the United States on the path to legal status.

A bipartisan bill to do just that and provide additional resources for increased security at the U.S./Mexico border was passed by the Senate in June of 2013. But the bill failed in the House of Representatives.

“Had the House of Representatives allowed that kind of bill –– a simple yes or no vote –– it would have passed with support from both parties,” Obama said. “And today it would be the law. But for a-year-and-a-half now, Republican leaders in the House have refused to allow that simple vote.”

As such, the president said, he will enact executive action to make the country’s immigration system “more fair and more just,” Obama said.

Obama’s predecessor, George W. Bush attempted such reform during his two terms as president, but failed to pass any legislation.

The first step in the process he said, will be to build on the progress at the international border and provide more resources for law enforcement personnel, “so that they can stem the flow of illegal crossings and speed the return of those who do cross over.”

“Adding more guns to the border, I don’t think it’s going to help anything,” said Jimmy Guevara, a junior psychology and Central American Studies major, after watching Obama’s speech. “In reality, people are always going to find a way, and they are going find ways to exploit the officials that are on the other side.”

Second, the president promised to “make it easier and faster” for high-skilled immigrants, graduates, and entrepreneurs to stay and contribute to the economy.

The final step, the president said, would allow the government to “responsibly,” he said, deal with the already millions of undocumented immigrants who live in the United States.

It is this third issue that Obama spent some time discussing.

In what he called a middle-ground deal, individuals who have lived in the United States as undocumented residents for more than five years, or have children who are American citizens or are legal residents, may apply to stay in the United States temporarily without fear of being deported.

Under this plan, individuals must register, undergo a criminal background check, and pay taxes, Obama said.

“You can come out of the shadows and get right with the law,” the president said.

However, Obama said, this deal is not amnesty, and does not apply to undocumented individuals who have arrived in the country recently or will cross the border illegally in the future. It does not grant citizenship or the right to stay in the United States permanently.

“All we’re saying is, we’re not going to deport you,” Obama said.

His reforms, the president said, would instead focus on the deportation of undocumented criminals and felons –– people who may be genuinely dangerous –– instead of children and families.

Obama cited an 80 percent increase in deportations of criminals in the last six years.

“That’s why we’re going to keep focusing enforcement resources on actual threats to our security –– felons, not families; criminals, not children; gang members, not a mom who’s working hard to provide for her kids,” Obama said.

The deportation of millions of undocumented immigrants would also be unrealistic, the president said.

However, some CSUN students who gathered to watch the speech in a classroom in Sierra Hall, were left scratching their heads.

Some said Obama did not elaborate on who would be able to qualify for the new deal. Others saw the speech as another political game.

“They continue to do it just because they’re worried about their pocket, or elections,” said Rosa Salamanca, a junior Central American Studies and psychology major. “He’s making it more relevant … in the end, it’s not just about him, it’s also about his party.

Guevara fels the new deal left a broad interpretation of what defines a “criminal.”

Growing up in the 1990s, Guevara saw many people arrested by police who seemed to have a so-called criminal element to them. He feels the same might result from Obama’s new deal.

“To what extent are they going to take it?” Guevara asked. “How is it interpreted?”

CSUN graduate student Carol Paniagua echoed Guevara’s thoughts, adding that the speech offered her no new information. She expected Obama to go into more detail about his new plan.

“What does he define as the people who don’t qualify when he criminalizes them?” she asked. “Who are the criminals? What are the crimes that qualify?”