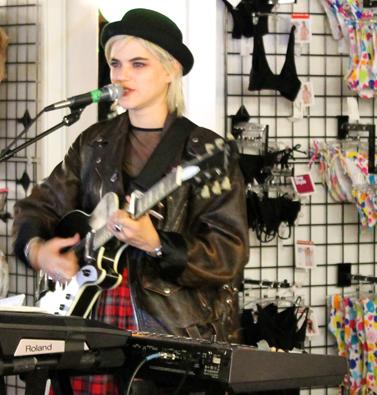 Indie rocker Soko turns heads with her cool post-punk style and shares the most vulnerable parts of herself through her somber songs.

A young, eclectic audience of eager fans and curious music lovers gathered at American Apparel’s Melrose location on Nov. 13 to see the French musician perform a collection of her melancholy songs.

The racks of sheer clothes and provocatively posed mannequins served as the backdrop for Soko in her quaint set up for her first few acoustic songs which she performed solo. Her band later joined her to perform the rest of her organically orchestrated set.

Soko, born Stephanie Sokolinski, is a Cesar Award nominated actress has acted in several French films. She also appeared in the viral “First Kiss” video that features openly bisexual Soko kissing a woman, as one of the 20 people asked to kiss a stranger for the first time. Her song “We Might Be Dead By Tomorrow” is featured in the video.

“My Dreams Dictate My Reality,” the title track off her upcoming sophomore record, is a somber rock track in which the singer sings about death and anxiety, realities that are often confronted in her songs.

“Keaton’s Song” the closing track on her upcoming record, is a sad tale about her relationship with ex-boyfriend English folk rock musician, Keaton Henson. She sings, “I’m trying to kill the worst of me to be the best for you.”

Soko’s emotional songs explore her experiences with depression, heartbreak, love and death. When she was five-years-old her father died. That put her in a bad emotional state in which she wanted to jump in the Seine river in Paris and kill herself. It’s experiences like these that Soko derives her music from.

With lyrics that are raw and genuine and a soft voice and delicate French accent, Soko juxtapose the heartbreak and pain she sings about. She brings her demons to the forefront and exposes the most vulnerable parts of herself for her art.

Soko is a versatile musician and plays guitar, bass, keyboards/synth and drums which she seamlessly switches off playing throughout her shows.

The “I Thought I Was an Alien” music video is one of the many that Soko directed herself. This song and “I Come in Peace” are inspired by her love for aliens.

Soko recently finished a nearly two-month long leg tour opening for Foster the People around the US.
“My Dreams Dictate My Reality” is said to be released late 2015.