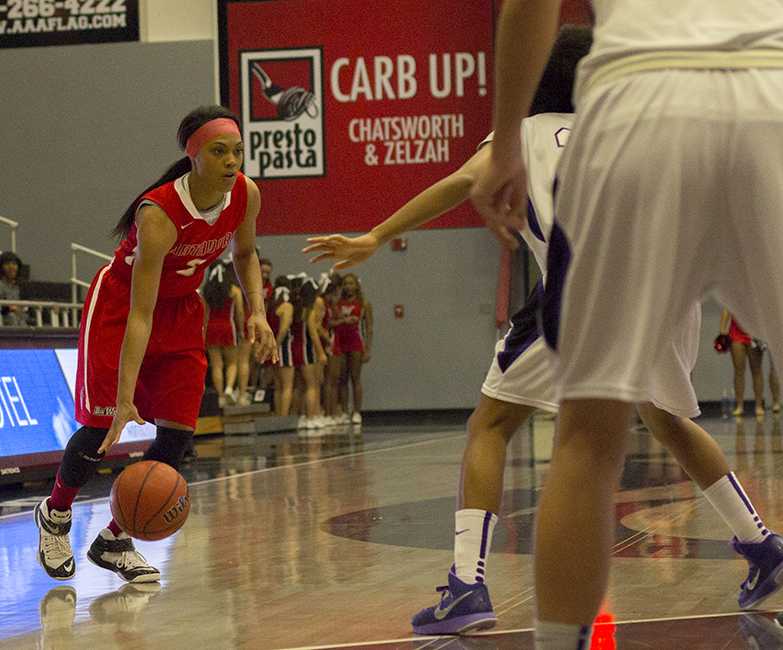 Senior Janae Sharpe had a rough night, only scoring eight points for the matadors, going 4 for 13 in field goals for the Matadors Friday night match against the University of Portland. Photo Credit: Trevor Stamp/Senior Photographer

The CSUN Matadors managed to shoot down the University of Portland Pilots 45-41 and secure a four-game winning streak Friday night at the Matadome, despite poor shooting and play execution.

Though CSUN managed a wire-to-wire victory against the Pilots, they shot at a lousy 24.6 percent for the game and at 11.5 percent in the second half.

“We just weren’t doing the simple things,” CSUN senior forward Randi Friess said. “We were just making everything much more complicated than it needed to be.”

Portland didn’t bring anything offensively or defensively that blatantly threatened the Matadors.The Pilots lacked long-range shooters and didn’t do any real damage aside from their center.

Sara Zaragoza, a 6-foot-4-inch post player for Portland faced CSUN’s center Camille Mahlknecht. When she was on Zaragoza, Mahlknecht managed to slap down the opponent’s post, but when the Matadors let their guard down, Zaragoza put in layups.

“We were just letting her get too deep of a position on us,” Friess said. “We just needed to push her out.”

The Pilots didn’t present an impossible defense either. They were successful in locking down the key, but CSUN’s wings didn’t come through against Portland as much as they have against other teams in the past.

Key shooters, Janae Sharpe and Cinnamon Lister, were not consistent during the game but proved their worth when it mattered.

Lister only landed free throws for the game and though she failed to put up any field goals, the shots she made — mattered. She took a couple of personal fouls from the Pilots in the final minute and shot well enough from the free-throw line to ward off a last-second 3-pointer from Portland.

“I just wasn’t ready to catch and shoot,” Lister said. “It will be better next game.”

Sharpe had a couple of good drives for the game, but the Pilot’s altitude proved problematic for the 5-foot-7-inch guard. She ended the game landing four of her 11 shots.

Senior guard Ashlee Guay carried the Matadors in points and shot a game high of 15 points.

CSUN head coach Jason Flowers showed frustration from the sidelines in the second half and didn’t have much to say about how the Matadors played.

“We’re happy we got the (win),” Friess said. “If we want to continue to be successful we have to fix the small things.”

The Matadors will play next Friday against the Montana State University Bobcats in the second round of the Radisson Chatsworth Thanksgiving Basketball Tournament.

The Bobcats have lost two of their three games this season, and defeated the California State University, Fullerton Titans 63-47 earlier this month.