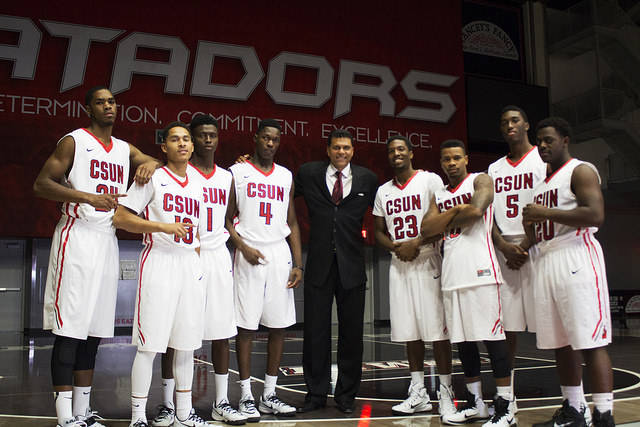 Trevor Stamp/ Senior Photographer Out of eight new freshmen to join the CSUN men's basketball team this season, six have yet to dress for a game. the athletic department elected to sit 'several' players due to potential violations of team rules and university policies.

Before the sixth game of the season, CSUN men’s basketball has yet to call on many of its new arrivals.

Of the nine new additions to the 2014-15 roster, only three have debuted and over a third of the roster has never represented CSUN in an official contest.

“CSUN has elected to sit several basketball players due to potential violations of team rules and University policies until a full and thorough investigation is completed. The investigation is underway, and out of an abundance of caution the student-athletes will be held out of competition until the matter is resolved. Our mission is to continue the pursuit of comprehensive excellence, both on and off the court. Because of the federal Family Educational Rights and Privacy Act (FERPA), CSUN cannot release the names of those involved or elaborate further about the nature of this matter.”

The nature and scope of the probe remain unclear, and CSUN Athletics officials are referring all Sundial inquiries to Associate Vice President, Marketing and Communications Jeff Noblitt.

“As we have made clear from the beginning, CSUN elected to sit several basketball players due to potential violation of team rules and athletic department polices until a full and thorough investigation is completed. As soon as the matter was brought to President Harrison’s attention, she directed an external and thorough review be conducted. An independent investigator has been appointed and the expectation is that the inquiry will be conducted as rapidly as possible, but at the same time, President Harrison has made it clear that she expects a thorough and detailed investigation, so the University has not put a timetable on the report.

Dr. Brandon E. Martin, Director of Intercollegiate Athletics at CSUN, will continue to monitor and control our athletics programs.  Beyond this information, I cannot provide further details or elaborate further about the timetable of events because CSUN does not want to jeopardize student privacy or interfere with the ongoing independent investigation that is taking place,” said Noblitt.

On Friday, Noblitt refused a Sundial request to elaborate into the matter.

The probe coincides with a CSUN Athletics rebranding campaign initiated by Director of Intercollegiate Athletics Dr. Brandon E. Martin. The dismissal of Bobby Braswell, long-time men’s basketball head coach was among Martin’s earliest acts. The latter half of Braswell’s 17-year tenure was marred by a string of incidents.

In 2003, the university was forced to self-report a potential grade tampering incident involving one of Braswell’s assistants.

In 2009, his son along with two players were charged with commercial burglary.

A few seasons later, the NCAA banned CSUN from any postseason after continual poor results on the NCAA’s annual Academic Progress Rate.