Thanksgiving, stuffed with colonialism and capitalism for added zest 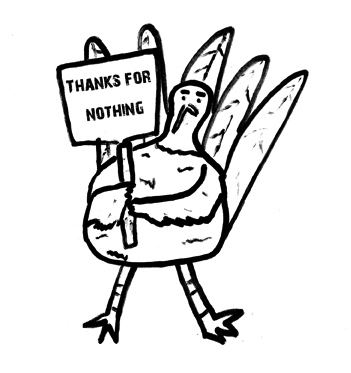 What do colonialism and capitalism have to do with the Thanksgiving holiday?

The theatrics of the holiday season create a seductive and aggravating period for most Americans. The capitalistic pull consumes people into buying food and gifts, and the supposed moral meaning of these special days of the year become invisible. However, there are other shrouded aspects to the upcoming holiday, Thanksgiving.

At a certain age, young Americans such as myself finally learn the broader, sinister truths behind the fictional “First Thanksgiving.” We are told about the communion between the religious separatists from England (commonly known as the Pilgrims) and the Wampanoag nation led by Massasoit.

As the months of 1621 progressed, the culmination of their growing relationship led to a spectacular feast. Decades later, war broke out between the colonists who were descended from the Pilgrims and Massasoit’s son Metacomet, also referred to as King Philip. This war ended with Metacomet’s assassination, his severed head displayed in the town of Plymouth for 25 years.

While Thanksgiving was established as a national holiday during the administration of Abraham Lincoln, the colonialistic aftermath persevered. The name of the holiday has even changed amongst some Americans, who call it “Thankstaking.” This name was suggested as a response by American Indian people who see the holiday as another celebration of genocide and American/white superiority.

Similar to Columbus Day, Thanksgiving reflects on a romanticized moment in early American history that people mostly brush aside as another warm and merry holiday of the year. Now accept what happened according to the Wampanoag nation, at “the first.”

Around 1970, the Wampanoag nation provided information to the American Indian Movement (AIM), describing that “a colonial militia had returned from murdering the men, women, and children of an Indian village,” and “the [colonial] governor proclaimed a holiday and feast to give thanks for the massacre.” All of this was done after the fall harvest was completed.

These details were stated in the autobiography “Where White Men Fear to Tread,” by a former leader of AIM, the late Russell Means.

So as I previously made clear, the holiday has its roots in colonialism, the adolescent years of nation-building. It also serves as a shroud that keeps us blind to America’s first inhabitants, who have faced unadulterated genocide since Columbus sailed the ocean blue.

While the holiday has its roots in indigenous rituals and traditions, it was appropriated as a day for people to stuff their faces with stuffing and preparing to splurge on Black Friday for half-off items.

I suggest that that the holiday should be renamed and remodeled as a somber occasion. As some people have referred to Columbus Day as Indigenous People’s Day, Thanksgiving must be perceived as a day of mourning.

The day can look back on moments such as the slaughter of the Aztecs, the Pequot holocaust, the Sand Creek and Wounded Knee massacres. This day should also look back upon a century’s worth of mourning for those who endured the abusive boarding schools and reservation life, and did not make it.

What is there to be thankful for, really? For a holiday that contributed to the near extinction of a people? Or even for any of the “progress” in our civilized, modern era? Thankful for 43 dead students with no answers behind their deaths? For the extended American mission in Afghanistan? Weak prosecutions of police officers who kill unarmed teenagers?

It will surely take humanity yet another millennia to get things right.

Thanksgiving. Another holiday that we should be giving thanks for, right? That’s what society tells us to do. This rather conditioned holiday has been embedded into our lives to the point that suggesting getting rid of Thanksgiving would be outright blasphemy.

While I will say that we should get rid of Thanksgiving because of the ideals it stands for (my colleague, Ryan Mancini, claims that Thanksgiving should be a day of mourning), here are things we should be thankful for during this holiday.

First let’s start with your place of residence. We should acknowledge the fact that we are all invaders on stolen lands. While there is not much that we can do about this, we can lay respects to those lives that were stolen in the name of “Manifest Destiny.”

There is also the purpose of not having to work or go to school on a holiday. However, this point only applies to some of you. There will be those who dread the holiday season because it is a time for capitalism to thrive. Black Friday, gifts for families, etc. In short, there are people who do not relax during this holiday or any other because in order to keep the gears of capitalism going, various stores will keep their doors open.

While some of you might not agree, we should boycott the idea of Black Friday (or the day that capitalism shows its true, ugly side of mass hysteria over material products, exploitation of labor and rich people grabbing onto more cash).

But if that is not at all relatable to us CSUN students, then we should perhaps be thankful for the fact that the CSU system hasn’t jumped on the tuition raising train, yet. On Nov. 20, the University of California (UC) system voted to raise tuition by five percent for the next five years because they are in need of more money. And apparently, they are not getting enough out of Proposition 30. So in a move that is ever so common in higher education, the costs of running the university falls on the students, while simultaneously raising some of the UC chancellors’ paychecks by as much as 20 percent.

By protesting, students can attempt to push the state government to increase school funding. But if they don’t receive any extra funding, then the students at the UCs will suffer higher tuition, and that sets a precedent for the rest of California’s public system (the CSUs and the community colleges). Now that the UCs have done it, it should be acceptable for the CSUs to follow suit, right?

This Thanksgiving holiday, I ask that we acknowledge the fact that Thanksgiving isn’t all that it was made out to be. The story behind this holiday was romanticized and bastardized to celebrate the history of pilgrims and indigenous people “coming together” and “helping each other” survive through a harsh winter. Those natives that helped the pilgrims would, years later, lose their homes, families, culture and lives to the sons and daughters of these colonists.

However that same story of exploitation exists today under the guise of a “humble,” family-driven and patriotic holiday. While we should be thankful for what we have, I do not believe that we should have a whole holiday dedicated to that. Ironically, the day after giving thanks is the day that we all fight each other for material products at businesses that refused to close their doors.

Acknowledge the privileges we are afforded upon the backs of those who are not as unfortunate. You know, we should rename Thanksgiving as “Thankstaking.” Capitalism, not just colonialism, demands my decision for changing the name of the holiday. That’s essentially been the other half of Thanksgiving’s history anyways.