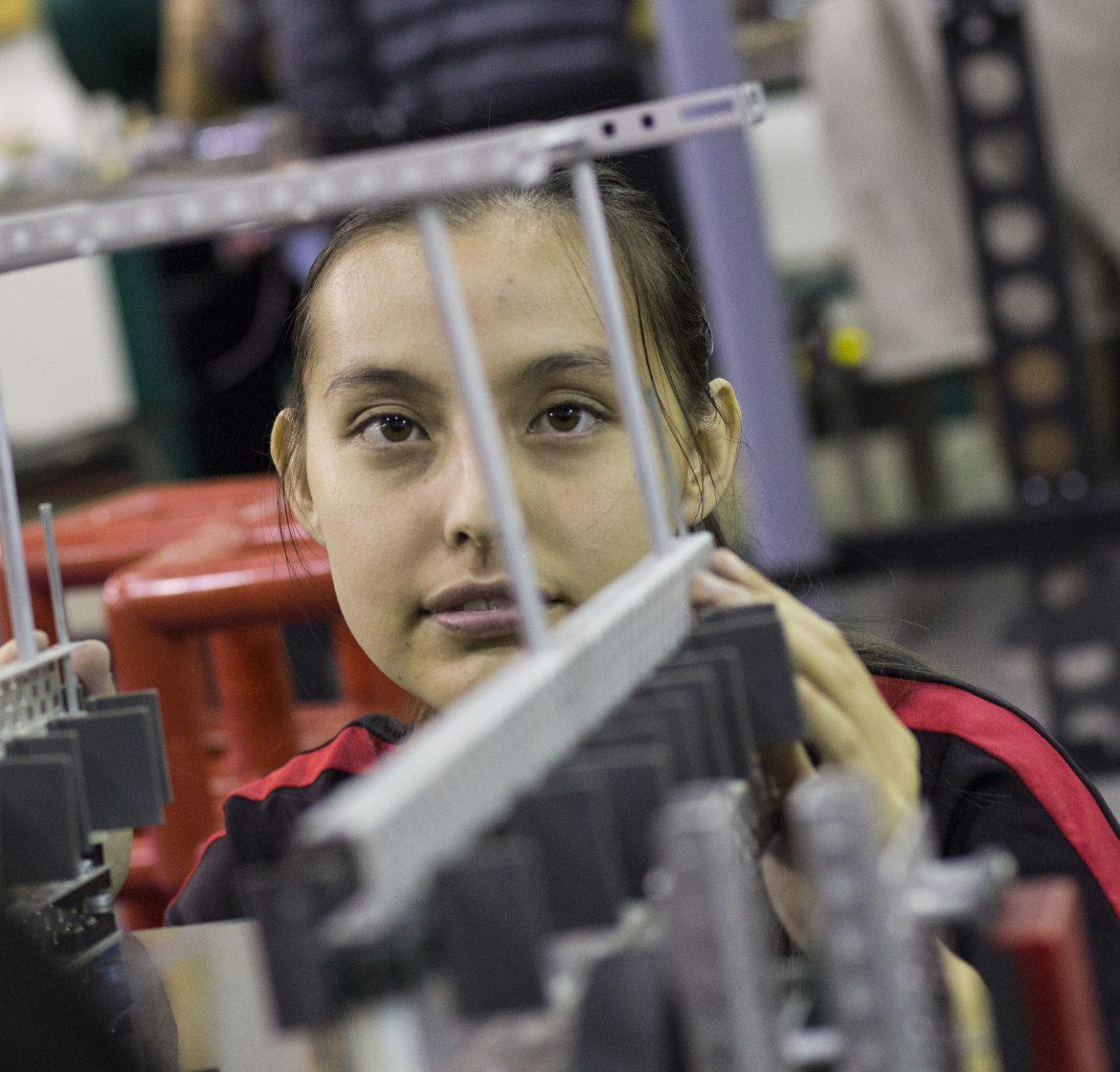 Erin Kubo, 19, freshman mechnical engineering major is one of the drivers of the robots in VEX Skyrise competitions for the Matabots. Photo credit: Trevor Stamp

After putting in hours of hard work each week, the Matabots team competed in their first event which showcased their engineering skills through their intricate robot designs. On Nov. 21 the Matabots participated in the VEX University League event. This event helps them qualify for the annual VEX Robotics World Championship which occurs annually in April.

Erin Kubo, Matabots sergeant of arms and mechanical engineering major, explains this is the first VEX University League tournament to be hosted at CSUN.

“We are testing it out to see if we can encourage other university teams in the U.S. to have more opportunities to practice so we are prepared for the world competition,” Kubo said.

Students from a variety of campuses such as USC, El Camino College, Mt. San Antonio College and Moorpark College came together last week to compete against one another, bringing new challenges and changes to the robot designs.

This year the VEX University League event is named “Skyrise” which illustrates the stacking of red and blue cubes into Skyrise sections. The league includes five events with four ranking sessions and the league finals.

“The challenge is to be able to pick up and score field elements, for this challenge those objects are cubes,” said Matabots treasurer Alex Resendiz. “The second objects are called ‘Skyrise sections’ and those are a small tube-like objects that are stackable.”

According to Resendiz, the purpose of the Skyrise sections is for the robots to individually gather each cube and stack them as high as possible. There are also posts around the field where the game is played and each team must gather the cubes and score them on the posts or on the Skyrise section tower.

In order to implement the most beneficial designs to compete in the League, the ideas for the robots come from a variety of places and the team’s new designs presentations and concepts are thoroughly discussed beforehand.

“The members have the floor and present their designs and concepts to the entire club,” Vice President Edwyn Jocol-Perez, computer engineering junior said. “After they are finished with their presentation we as a club discuss how to further improve the designs.” Afterwards, the team votes on which two robot designs will be constructed for the VEX World Championship.

In order to build these robots, a lot of materials and tools are required.

While building the robot follows a design that the team votes on, programming is where the technical skills come in.

Although designing a robot that will defeat the competitors robot is important, the Matabots team encourages valuable characteristics in each individual involved.

One of the qualities fostered is the amount of teamwork involved between people from all walks of life who come together to achieve a common goal.

“We have people from all different backgrounds and you get to learn all different aspects where you might see something a certain way and someone else might not see it exactly the same,” Resendiz said. “It gives everyone who wants to participate a glimpse into the actual world where not everyone agrees and compromises have to be made.”

While building the robots requires much patience and hard work, the Matabots team members express their pride in being a part of the team.

“From screwing the first pieces together to adding the final touches, it always gives you a sense of accomplishment,” Jocol said. “But for the most part it is fun because it reminds me of playing with Legos.”

One of the most valuable attributes is the sense of community that develops each week as well as the excitement that comes from competing.

“It is a thrill to drive the robots during competitions and it’s by far my favorite part about competing,” said President of Matabots Nicholas Monson, computer science major. “It can be very intense at times and curtail to the team’s success as well, the feeling of winning a match makes it worth it even more.”

The Matabots not only get together to build robots, but many of them help each other with schoolwork as they are all engineering majors. Being a part of the Matabots team incorporates community development, teamwork and acquiring a wealth of knowledge. The members of the team continue to work toward developing the best robot design possible for their upcoming competitions.

Students in every major are encouraged to join the Matabots team, according to Jocol. Anyone with a desire to learn or has an interest in building robots is welcome. For those interested in attending the Matabots events this semester, the final ranking session before the Championship Event is Dec. 20th and the final Championship event takes place in January 2015.