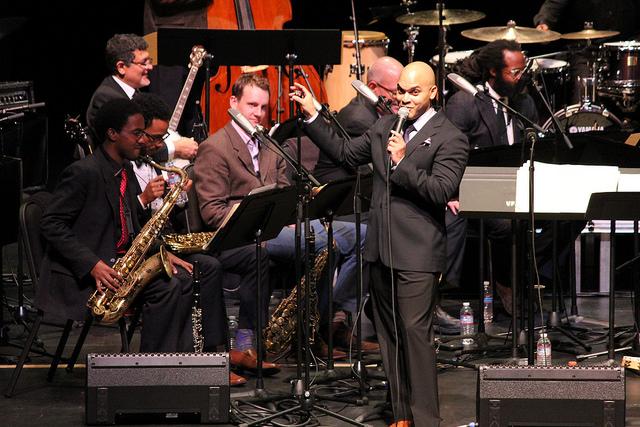 Backed by the musical powerhouse that is the New Orleans Jazz Orchestra (NOJO), composer, improv entertainer and cultural ambassador Irvin Mayfield’s soulful vibe brought the house down and the audience up at the Valley Performing Arts Center (VPAC) Saturday evening.

As the fourth stop on their five-city west coast tour, the VPAC justly served Mayfield and the NOJO’s Big Easy sound with its renowned acoustic qualities and energized audience.

Hailing from the birthplace of the genre itself and a Billboard and Grammy Award winning artist, Mayfield earned a place as one of the giants in the jazz world combining the distinct cultural sounds of New Orleans with his undying passion for music to create an authentic experience all its own.

Partnered with one of the most sought after jazz orchestras in the nation, NOJO, Mayfield looks to bring the genre back to the forefront of American music culture in a big way.

Mayfield and the 18-piece NOJO kicked things off right Saturday night coming out energetically with their rendition of Louie Prima’s “Sing, Sing, Sing (With A Swing)” (AKA the Chips Ahoy song).

Clarinetist Rex Gregory came through with a remarkably dynamic solo mid-song accompanied by drummer Adonis Rose, whose rhythmic tom-tom blasts served as the perfect cadence for the energy onstage.

The audience’s reaction matched the excitement onstage as they emphatically rose to what would be the first of many standing ovations for the evening.

“That just happened!” said Mayfield in what would become his catchphrase for the evening.

Despite the formal nature of hall concerts, Mayfield added a light-hearted air to the event combining witty banter and personal anecdotes for a more intimate experience.

Out of the banter came a funny quip where Mayfield jokingly challenged tenor saxophonist Ricardo “sweet-bush” Pascal to earn the audience’s approval during his “Northridge Debut” or be kicked out of the band.

“This ain’t college, this is the real world,”  Mayfield said.

Pascal, a student at the University of New Orleans, rose to the challenge performing lead sax on Stevie Wonder’s “Secret Life of Plants” and earned one of the biggest standing ovations for the evening.

The night continued, the crowd enjoyed a special guest appearance by American Idol finalist Haley Reinhart as she sang her soulful version of “Come Rain or Come Shine” to much applause.

Outshining the season 10 American Idol finalist, NOJO’s slide trumpet and vocalist James Williams rightfully earned a standing ovation with his rendition of Randy Newman’s “You’ve Got a Friend in Me,” a favorite from the classic 1995 children’s film “Toy Story.”

As the evening wound down the energy from Mayfield and the NOJA wouldn’t quit, wrapping up the set with their jazz-inspired salsa descarga (free-form jam).

The final song of the evening came in the form of a tribute to Mayfield’s late father who passed during the devastation of Hurricane Katrina. Titled “May He Rest in Peace,” the tribute brought out the best in Mayfield’s prowess as a trumpet player and ended the show with multiple standing ovations.

Although the night was marked with amazing performances by special guests and talented musicians from the NOJO, Mayfield himself stole the show with his beautifully crafted trumpet solos and an onstage demeanor.

As bandleader, his cues to the orchestra took on a dance-like feel and added a certain indescribable soul that energized the crowd all night.

In the words of Mayfield himself, “that just happened,” and the crowd could not have enjoyed it any less.