Men’s Basketball: Matadors out of gas in OT loss to University of Arkansas- Little Rock 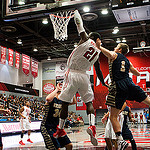 Vincent Nguyen
CSUN’s lack of depth on the bench proved to be a considerable factor in a 93-88 double overtime loss against the University of Arkansas-Little Rock (3-1) that saw four Matadors foul out of the game Nov. 23 in Arkansas.

The contest against UALR was a back to back for the Matadors and the championship of the EA Sports Maui Invitational Regional Games at Jack Stephens Center.

Senior guard Stephan Hicks led the scoresheet with 25 points as the Matadors fell to 2-3.

After an easily winning both of their last two games, the Matadors started off poorly as the Trojans started off with a 9-0 within the first four minutes of the game. CSUN quickly fought back to stay within the game, but still trailed for the majority of the half. The Matadors pushed it to a three-point game just before halftime, but ended up trailing 41-36 at the end of the first half.

The Matadors tied it up at 48 points apiece after five minutes of play in the second half, and stayed that way for nearly three minutes thanks to a number of defensive displays from both teams. UALR broke the deadlock and restored their lead with CSUN close on their trail.

With a 69-63 scoreline with less than three minutes left in the game, the Matadors played a tight defense and rallied to tie the game up at 69-69 and send the two teams to overtime.

Hicks made a jumper right as overtime started, earning the Matadors their first lead of the game at 71-69. The Matadors led throughout the entire first overtime period, but at the cost of four of their starters. Senior forwards Tre Hale-Edmerson, Devonte Elliott, and guards junior Landon Drew and sophomore Aaron Parks all fouled out before the second overtime period, leaving head coach Reggie Theus struggling to play players off the bench.

Despite the late-game bench struggles, Theus was satisfied with his team’s fight.

“I think that when you look at how hard the guys played and taking UALR to double overtime with a short bench, you commend our guys for the way they played,” Theus told Go Matadors.

The Matadors held on to their lead for only two minutes before the Trojans stormed back. UALR went on a 5-0 run to take a 91-86 lead with 39 seconds to go. With 24 seconds left in the game, Hicks ran down the baseline and came from underneath the basket to slam down a dunk to bring the deficit to three points.

Senior guard Robert Cid was forced to foul the Trojans with 21 seconds left, and UALR sank two free throws to bring their lead back to five. In the final 20 seconds, freshman guard Ajon Efferson missed two three-pointers, and Hicks flubbed a dunk opportunity to seal the win for the Trojans.

Maxwell racked up 23 points and collected 13 rebounds for his first double-double of the season and the 31st of his career. Junior guard Landon Drew turned in 14 points, four rebounds and three assists, but also committed four turnovers. Hale-Edmerson and Parks turned in a combined 19 points and 13 rebounds to round out the starters’ statistics.

Sunday’s loss follows 79-72 victory for CSUN over the Samford Bulldogs (1-3) on Nov. 22. Hicks piled up 22 points while Maxwell added 24 points in the semifinals of the EA Sports Maui Invitational Regional Games.

The team shot 61.4 percent from the field including 24 points in the paint in just the first half.

After trading buckets with Samford early, CSUN had a ten point lead with under five minutes to play.

The Matadors high paced offense was key in surviving a late surge from the Bulldogs. Landon Drew finished Saturday’s show with 12 points and nine assists.

A 1-1 outcome this weekend, makes Head Coach Reggie Theus 5-2 in games played at a neutral site, according to Go Matadors.

CSUN will travel back home to play Portland State Vikings Wednesday night following the women’s volleyball game at 5 p.m. The Vikings are 2-0 on the season, including a 76-68 season-opening win at the USC Trojans on Nov. 15. CSUN will have to stop a Vikings team featuring five players averaging double-digit points this season.