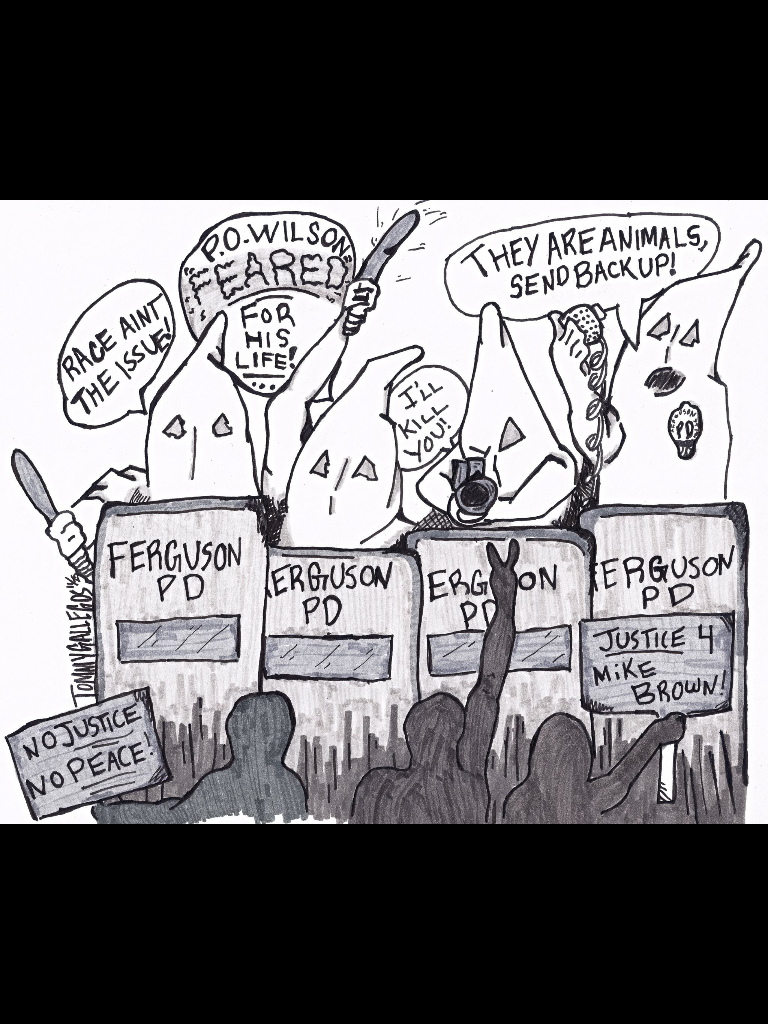 Across the nation, screams of “Just choose one! Any charge!” can be heard.

Look within the transcripts and you decipher your own truth from testimony and evidence released following the grand juries decision.

After reading through the grand jury transcripts, hopefully your thoughts are something to the tune of, “Wait what did I just read?” and, “Can that be right?” Again, after reading page after page once finishing some sequences of testimony, you’ll find yourself wishing you could wash away from your mind the filth you’d just read.

Who was on this grand jury? And how can we ship them back to the 1880s South?

The fact that Ferguson is made up of somewhere between 65-70 percent of African American citizens, yet the grand jury was comprised of only three African Americans and nine Caucasians, leads one to believe the decision to not charge Wilson was made long before Brown was even shot dead.

The process of charging police officers in the killing of unarmed citizens has without a doubt, failed time after time in this country.

From transcripts and testimony, let’s relive the very sporadically mismanaged information and conflicting accounts from the incident which led to the eventual death of Mike Brown.

Days after the initial incident, the Ferguson police department released a video of Brown and a patron at a convenience store. Following a verbal altercation with the cashier, Brown left the store with an unpaid box of cigars in hand, just moments before his encounter with Wilson.

This video left many believing Brown “got what he deserved, he was a crook and fought the law!” Misguided, yes, but the opinion of some. How some translate the taking of a box of 99-cent cigars should justify the right to kill is beyond me.

According to the grand jury transcript, following the struggle within the police cruiser driver’s side window and the firing of two shots from Wilson’s firearm within the vehicle, Brown darted away from the struggle with Wilson, possibly grazed on his hand and dazed from the sound of the initial shots. Some witness testimony backs up Wilson’s claim, in which he states he exited his vehicle and shot off more rounds toward Brown as he ran away. I repeat, as Brown ran away.

At this moment, as a man of the law, was it in Wilson’s best interest to exit his car and chase down Brown? According to the testimony, Wilson believed it was within his right and an obligation of his training to follow and pursue Brown.

According to Wilson’s testimony, Brown then decided enough was enough and allegedly turned around and charged toward Wilson. Did Brown turn around, in disbelief of shots continuously passing by him and walk towards Wilson surrendering? Or could he have been heading straight for Wilson, to “tackle” him, and continue handing out his beating? We will never know.

Wilson had a baton and pepper spray. Why not use these on a charging Brown? Wilson is 6 foot 4 inches, Brown 6 foot 5 inches; why does Wilson act like Brown had such an advantage over him? Granted, Brown had the overall weight advantage, being some 75 pounds more than Wilson, but Wilson was able to persuade the grand jury of Brown’s pure dominance over him. It left him no choice but to shoot to kill, he said.

Why not wait in the patrol car to call for help? You knew what Brown looked like, and now, when realizing Brown might be the “perpetrator” from the convenient store, you could assume there is video of Brown “taking” the cigars. Why not rely on such video to identify Brown and apprehend him later?

A lot of these questions should have been asked by the grand jury, but you would think officer Wilson and St. Louis prosecution attorney, Robert McCulloch were preaching to mannequins with the way that the grand jury’s transcripts flow.

One of Wilson’s quotes that deserves attention stated, “(It) look(ed) like he was almost bulking up to run through the shots, like it was making him mad that I’m shooting at him.”

Well no shit Einstein, that’s the reaction of someone getting shot for running away from an incredulous altercation, which never should have happened.

Wilson in his testimony, leads the grand jury down the assumption that he was always in the right, and used his best judgment to ensure the safety of all people involved in the situation.

Why let all the facts and witnesses go about the entire case and evidence when the overall process of the grand jury was to decide whether or not there was enough evidence to present one of four optional charges?

The series of events following Brown’s death are simply incredible. The overseeing of evidence, testimony, and information has been misguided and deliberately used against the deceased victim.

Wilson “cries wolf,” presumably making the reader both uneasy and tempered. Wilson, in testimony claimed, “(Brown) was like Hulk Hogan holding onto a five-year old (Wilson).” Really? How pathetic, to paint Brown as not only the aggressor, but also some grotesque image of power and strength.

Wilson and the Ferguson Police Department have been on a mission since day one: to paint Brown as an aggressive African American deadbeat, and Wilson as some type of saint, caught in the cross-fire of an unfortunate situation.

Wilson overstepped his boundaries and used deadly force unconsciously. If you truly believe Wilson had to shoot and kill Brown that day, my heart hurts for you.

Why are protests ensuing throughout Ferguson and in major cities across America? Not just for Brown, but also for the countless victims, predominantly minorities and African Americans shot and killed by police officers every year in America.

For many, the “non-indictment” is no surprise. McCulloch has a prolonged history of favoring police officers.

Instead of indicting Wilson for his wrongs, McCulloch looks to indict the media, social media and protesters instead. A true artist, McCulloch, in molding and shaping the sculpture that is “Darren Wilson the hero, Michael Brown the villain.”

Let us not forget, McCulloch’s brother and cousin are police officers. His mom was a clerk for law enforcement for  20 years, and father was a cop killed while on duty. Think he is biased?

Missouri Gov. Jay Nixon has now ordered for more than 2,000 additional National Guard troops, as he said, “Lives and property must be protected. This community deserves to have peace.”

Now the Brown family must fight Wilson and the Ferguson Police Department in civil court, with hopes of proving Wilson killed Brown “intentionally” or “neglectfully.”

A one-sided biased evaluation, with no indictment handed down, should further continue our questioning of how cases regarding the killing of unarmed minority men at the hands of police officers are managed by our judicial system. In America, the police officer’s right to kill has to be questioned. What are the guidelines? Cops will use the “my life was in danger,” plea forever now since they see how the system favors it.

Why is the nation divided on race? We are a nation of many races and cultures. Over time one thing is for certain, white privilege and entitlement are continuously alive and well.

With institutionalized racism in America, no progress has really been made, only false promise. Dont give me that, “Our President is black!,” crap. Rights and privileges have been realized for minorities in America, but the foundation of freedom is still skewed and biased toward their white counterparts.

Following the grand jury’s announcement, when speaking on racial tension and institutionalization in America, President Barack Obama said, “Not made up, (but) rooted in realities.”

In regards to Brown and Wilson’s encounter, there is no doubt in which reality Brown faced that day. Officer Darren Wilson, judge, jury and executioner.