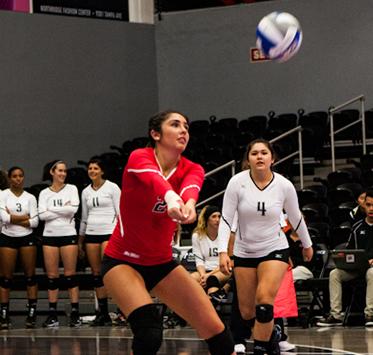 For the fifth consecutive time, the Matadors earned a win after sweeping the Cal State Fullerton Titans (25-11, 25-12, 25-21) at the Matadome on Wednesday.

Not only was this match against Cal State Fullerton (8-20, 2-13) another win for the Matadors’ streak (19-8, 10-5 Big West), but it is also the fifth match in a row where they were able to successfully sweep their opponent.

Leading the team was junior outside hitter Cieana Stinson with 14 kills, a hitting percentage of .429 and two digs. Both Casey Hinger, senior middle blocker, and Natalie Allen, senior opposite hitter, put up nine kills and served one ace each. Hinger hit a .533 along with eight digs and four blocks while Allen hit a .294.

Senior middle blocker Sam Kaul hit a .750 and put up six kills along with sophomore outside hitter Julie Haake (.105).

Set one started off as a back and forth game with both teams tying up the score several times. Eventually, the Matadors hustled to earn a 16-8 lead that would continue to increase throughout the set. The Titans were able to get in three more points before the Matadors took the set at 25-11.

The Matadors set the pace for the second set as they were able to earn a 5-point lead right out of the gate (10-5). The Titans were not able to close the lead enough as the Matadors initiated a 6-1 run that brought increased their lead to 16-6.

The Titans were able to shave the Matadors lead to nine (21-12) but four back-to-back kills from Kaul, Stinson and Allen brought the set to a close with a 25-12 win.

Set three looked like it was going to go the same way as the first two with the Matadors creating a 9-point lead (12-3) at the start. Eventually, the Titans were able to shorten the Matadors’ lead (22-19) after securing five consecutive points.

After two errors on the Titans behalf, it looked like Fullerton was not going to be able to add any more points to the scoreboard. The Titan ended up earning two more points before committing a service error that would end the set at 25-21 in the Matadors favor.

The Matadors will be playing in their last regular season game with a match against UC Irvine on Saturday, Nov. 29 in the Matadome at 7 p.m.

This night will also be the team’s Senior Night as they honor Natalie Allen, Brooke Dawson, Casey Hinger, Sam Kaul and Kelcie Randazzo. The Senior Night activities will take place before the match begins.