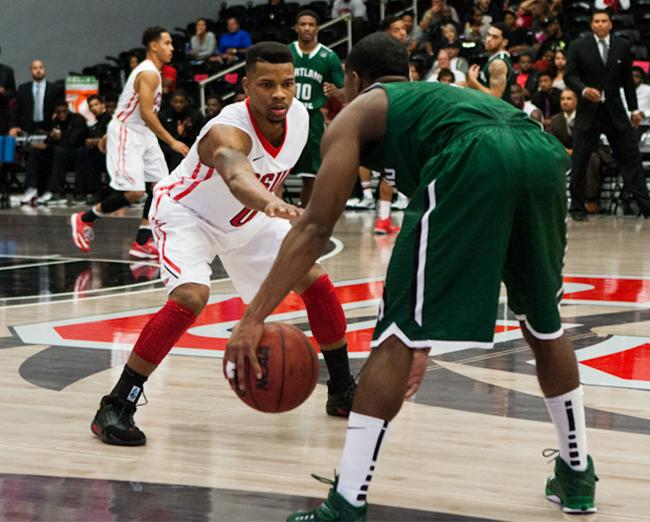 “The guys just forgot who they are probably thinking about turkey and dressing instead of what they had to do tonight.” coach Reggie Theus said. “They did not come out ready to play. They weren’t focused offensively or defensively.”

The Matadors clawed their way back into the game after being down by 19 points with 10:46 left in the second half.

After sophomore guard Aaron Parks started off the game 0-for-9, he stringed off three consecutive makes for a 7-0 run, as the Matadors cut the deficit to eight, 57-49.

Minutes later after both teams were missing shot after shot, Stephan Hicks made a layup to cut the deficit to six, 57-51, with 1:32 left in regulation.

However, six made free throws from the Vikings down the stretch sealed the deal.

The Matadors’ defense held its ground as the Vikings did not score a field goal for the last 6 minutes and 49 seconds.

Stephan Hicks chipped in with 13 points and seven rebounds, while senior Tre Hale-Edmerson put up eight points and nine rebounds

At one point during the game, the starting backcourt of Parks and Landon Drew combined for 1-for-16.

Drew seemed to play better the last two games after putting up 12 points and 14 points, but ended this game shooting 2-for-10 and 0-for-3 in three pointers with six points, one assist and three turnovers.

The Matadors turned the ball over a season high 18 times and the Vikings took advantage by scoring 19 points off the turnovers.

“That’s just not coming ready to play,” Maxwell said referring to the high number of turnovers. “Everybody has to be on the same page and that’s what we’re going to have to work on.”

The Vikings started the game on a 7-2 run. The Matadors were just 1-for-6 to start the game.

CSUN caught up as they were trailing by just two points, 18-16, when Stephan Hicks made a layup as he was fouled.

Portland St. made five three pointers in the first half led by Gary Winston with three and DaSehaun Wiggins with two.

Overall, the Vikings shot 7-for-14 from three point land while the Matadors shot just 1-for-9.

Next stop for CSUN, will be on Nov. 29 as they go to Seattle University. Tipoff is scheduled for 7 p.m.