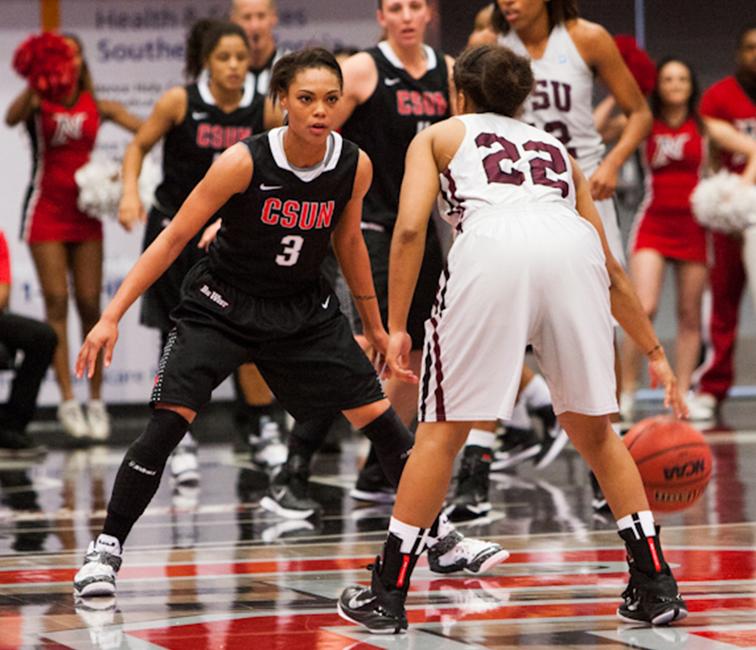 Lead by Tournament MVP and Senior center Camille Mahlknecht, the CSUN women’s basketball team defeated the Texas Southern Lady Tigers, 63-50 to be crowned champions of the 2014 Radisson Hotel Chatsworth Thanksgiving Basketball Classic, advancing to (6-0) on the season, Nov. 29 at the Matadome.

After their victory over Montana State on Friday, the Matadors stifled and smothered the Lady Tigers, whom were picked to finish second in the Southwestern Atlantic Conference preseason poll. The Lady Tigers had no answer for Mahlknecht, who finished with 14 points, 17 rebounds, three blocks and one assist in 31 minutes along with fellow seniors, guards Janae Sharpe, Ashlee Guay, and Cinnamon Lister whom all scored in double figures.

“Anytime you can call yourself a champion that helps and anytime you can win back-to-back games in a tournament setting, it mimics a conference tournament because in order to win a conference tournament you’re going to have to win back to games,” Head Coach Jason Flowers said. “Everything we do centers around our defense and I thought they did a great job of coming out the gate with a lot of intensity and we withstood their first wave and I thought we settled in and made some good adjustments.”

“I think they came out and got some easy baskets early, partly off of turnovers and they started the game off at a high level as far as intensity,” Flowers said. “I thought it was great that we got the experience to play two completely different styles.”

He said, Montana State shot the ball well from the perimeter. In contrast, Texas Southern played an attacking style. “So for us to be able to make that adjustment with minimal time in between games is really big,” Flowers said.

“We still have a lot of things to work on and we’re making improvements, which is always good,” said Flowers. “We just executed. We made open shots. We still didn’t shoot nearly as high a percentage from three as we would like but at the same time we still ended up shooting over 40% for the game. We’ll take it and get better.”

Mahlknecht lead the game in all rebounding categories with 17 total, 12 defensive and five offensive rebounds as well as five blocks. The tournament MVP came off the bench against Montana State but still averaged 11.5 points, 15.5 rebounds and 4.5 blocks for the tournament. Mahlknecht also finished second with 14 points scored on 7-9 shooting from the field against Texas Southern.

“We have a very talented team so to be recognized is very exciting,” said Mahlknecht.“I feel blessed but overall it was a huge team effort that I was able to do things because collectively we did the right things on defense and offense.”

Sharpe lead all scorers with 15 points on 5-16 shooting from the field, 1-3 from the 3-point line, 4-6 from the free throw line, and added eight rebounds, five assists, and one steal in 35 minutes of play.

“We took what they gave us,” Sharpe said. “If they took everything away we looked for the open man so I thought we did a solid job in taking control of the game and playing at our pace and being aggressive.”

“I don’t think I ever have a best game,” said Guay. “There’s always room for improvement and I was getting to the basket but I wasn’t finishing. There’s always something I can do better. We had some mental lapses and that’s why they had some chances to score and opportunities but when we just played our solid defensive game then we did well.”

In comparison to their Big West opponents, the Matadors have the most wins to date (6-0) and along with UC Riverside (5-0), are the only remaining undefeated teams left in the conference.

“We approach every game the same,” Guay said. “We go in to win.”

She said every team is an oppurtunity for CSUN to show off their skill. “ It’s a pretty big win and continuing to be undefeated right now is a great feeling,” said Guay. “We’re developing and we’re growing every single game.”

The Matadors play St. Mary’s in Moraga at 6 p.m. on Thursday, December 4.