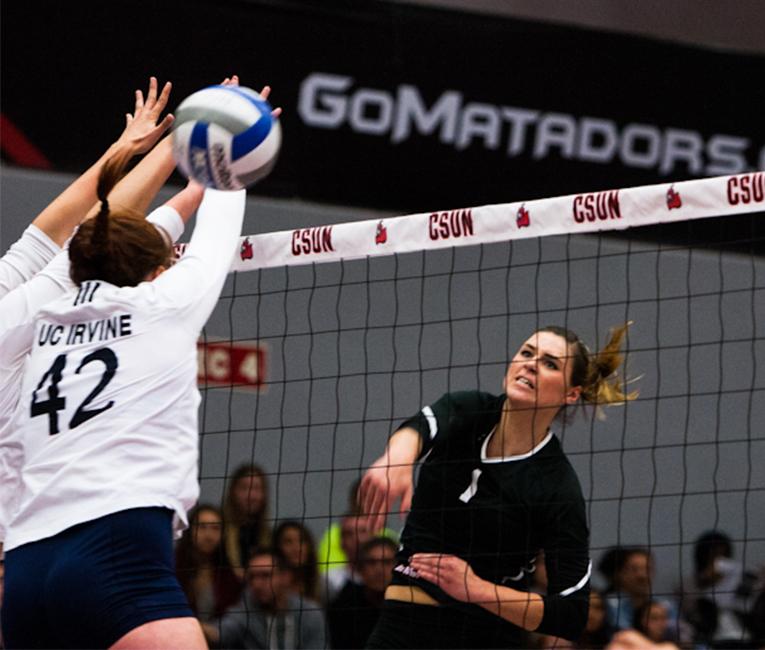 Saturday night was also the Matadors’ senior night which honored Natalie Allen, Brooke Dawson, Casey Hinger, Sam Kaul and Kelcie Randazzo. During the senior’s pre-math ceremony, they each took the time to thank the people in their lives for their support.

Although the Matadors were hoping to close out the season with another win to add to their five-game streak, head coach Jeff Stork is still very proud of what they had been able to accomplish overall.

“I have always believed in this team,” Stork said. “We did have ups and downs during the season but overall it was a great year. We had a lot of wonderful play from all of the players and obviously this match was disappointing for us but overall this season was awesome.”

Leading the Matadors was Hinger, middle blocker, with 24 kills, a hitting percentage of .452, 12 digs and nine blocks. Hinger was able to earn her ninth double-double of the season with those stats.

Junior outside hitter Cieana Stinson followed right behind Hinger with 17 kills and hitting a .350 on 40 swings while Kaul, middle blocker, finished with five kills and eight blocks.

Set one was a back-and-forth game for most of its duration until the Matadors were able to gain a five-point lead at 12-17. That lead was closed just as fast as it was created after a Matador attack error and two kills and an ace by UCI (16-17).

By the end of the set, both teams were going point-for-point just as they were in the beginning. UCI managed to complete two consecutive kills at the end which granted the Anteaters a 28-26 victory.

The Matadors set the pace during the second set after an eight-point run that gave them a significant lead (10-20) which eventually resulted in a 25-16 win.
Sets three and four were in UCI’s favor as they closed each one out with a win (25-23 and 27-25 respectively).

The Matadors will know if they are chosen for the NCAA after ESPNU announces the tournament field on Sunday at 5:30 p.m.