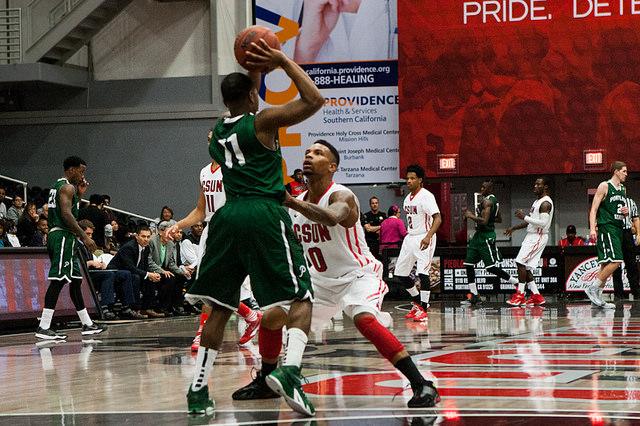 The CSUN Matadors (2-5) could not keep up with the hot three point shooting from Seattle University Redhawks (2-3) as the Matadors lost 70-58.

Freshmen guard Ajon Efferson led the Matadors in scoring with 11 off the bench and went 3-for-6 from downtown but it proved to be not enough.

The Redhawks started the game with a 8-2 run as the Matadors were 1-for-7 to begin the game.

The Matadors tried to claw back in the game when they were down by eight, 30-22.

Efferson nailed a three pointer, Landon Drew made a layup and Efferson again made a jumpshot to cut the deficit to just one, 30-29.

However, the Redhawks closed the first half with a 5-0 run when Jarell Flora made a layup and Isiah Umping made one of his seven made three pointers on the night.

The Matadors fought back with a 14-4 run as six of their points came on two three pointers from Landon Drew.

With 7:49 left in regulation, the Matadors were down 50-49 as it forced the Redhawks to call a timeout.

After the Redhawks came back from the timeout, they were blazing hot as Flora hit back-to-back three pointers to fuel a 12-2 run and a 62-51 lead with just 2:44 left in regulation.

Down the stretch, the Redhawks made 8-for-8 free throws to clinch the game.

Senior forward Stephen Maxwell for the Matadors made just one out of his 10 attempted shots and ended the night with just two points after averaging over 18 points in the previous six games.

Junior center Tre Hale-Edmerson had an all-around night as he scored 10 points, grabbed five rebounds, dished out five assists and chipped in with three blocks and five steals.

The Matadors will look to stop their three-game skid as they come back home to face South Dakota, Tuesday Dec. 2. Tipoff is scheduled for 7 p.m.