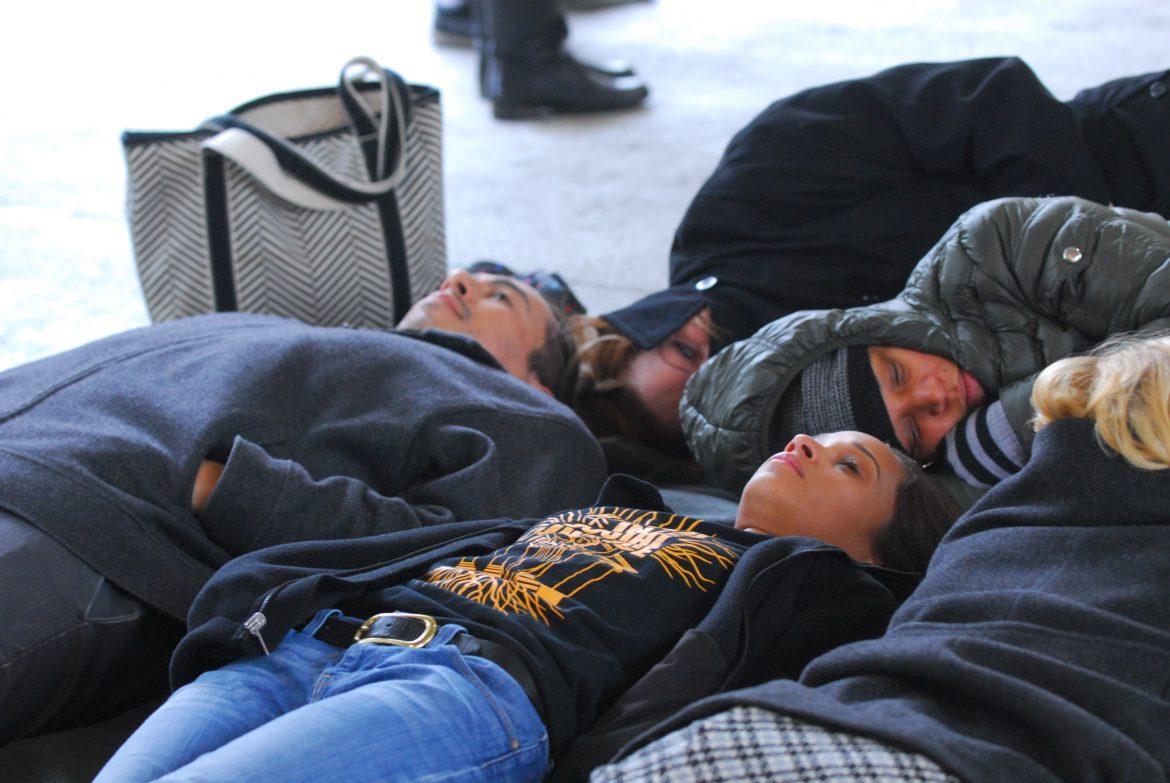 Members of the CSUN chapter of the Black Student Union lie on the ground in protest of the killing of Michael Brown, who was shot by Ferguson police officer Darren Wilson. On Nov. 24, a grand jury decided not to indict Wilson in the shooting of the unarmed teenager.

Despite Tuesday’s heavy rains, students from the CSUN chapter of the Black Student Union staged a four-hour silent protest outside of Sierra Hall for Michael Brown, the 18-year-old unarmed black man who was shot and killed after a confrontation with police officer Darren Wilson in Ferguson, Mo.

As part of the protest, participants laid flat on the ground to express unity and bring awareness to others about Brown’s killing.

“We want to bring awareness. A lot of people are mad and are rioting about the verdict but they have to remember that somebody’s life was lost at the end of the day,” said Ma’Ronda George, co-vice president of the Black Student Union.

The protest gave participants an opportunity to not only educate themselves on Michael Brown, but also on other pending cases that have resulted in police officers being indicted over similar situations.

A video projector displaying clips of news interviews, as well as messages from Black Student Union members, and posters, pictures, and other items, were strategically placed around the protest site to tell each victim’s story.

A picture of Trayvon Martin, who was shot in 2012 by neighborhood watch volunteer George Zimmerman, and other pictures of recent victims, were placed on a Sierra Tower pillar with items in front of them detailing what they had in possession, none of which included weapons.

Students on hand willingly spoke about their experiences dealing with police and specific situations where they’ve felt law enforcement abused their power.

“The more I stand here and watch, the more it starts meaning a lot to me,” said Daniel Cunningham, a CSUN sophomore vocal performance major. “I’ve had cops draw their guns at me just because I was at the park with friends at night. We were just talking and hanging out. There weren’t guns, weapons, or alcohol, but they still drew their guns at us for questionable activity. It was really intimidating.”

Onlookers showed their support by finding space on the floor and laying next to other protestors.

Alexus Smith, Black Student Union CSUN chapter president, expressed her gratitude at the students who participated in the protest.

“If there are people standing and feel inspired then we want them to lay with us, whether it’s for five minutes or 30 seconds,” Smith said. “So far I’ve seen many people that I’ve never met before and it’s great to have many people participate from all races.”

Students spoke about the importance of such protests taking place on campus.

“They are fighting for equality and I’m someone that wants equality for everybody. I stand up and support that,” said Cunningham.

Some students expressed disappointment that the university didn’t send a message to its students or the public regarding the Ferguson decision.

“Wishing that the university would have done something is an understatement,” said Nuor Chaaban, a CSUN junior urban planning major. “Considering that CSUN is one of the most diverse campuses that I’ve been on, it’s sad to see that the school didn’t release a statement.”

Black Student Union members hoped that the university would have taken a stance on the issue.

The Black Student Union will continue to stage peaceful protests throughout the rest of the week. They will be leading a march throughout campus on Dec. 3 from noon to 2 p.m. that will end with a memorial to honor Michael Brown.

“This isn’t just a black thing, it’s not something that just goes on in black communities. This goes on in communities of people of all color,” Smith said. “No matter what your race is, if you’re wrongfully murdered it’s a problem and just because your murderer is a cop does not mean that it is okay for them to get off.”