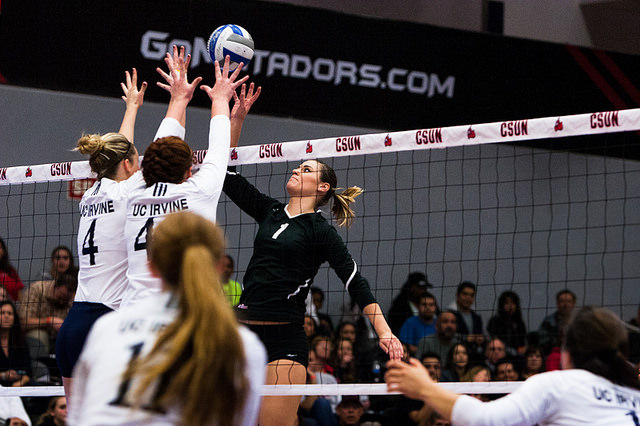 An NCAA tournament bid would have been the climax to a 19-9 season for the Matadors. However, when the championship field was announced Nov. 30, CSUN was not selected for any of the 64 tournament seeds despite being a top 50 ranked team.

“We did have ups and downs during the season but overall it was a great year.” Stork said after the defeat.

The loss would turn out to be the ending for the Matadors 2014 season.

“We had a lot of wonderful play from all of the players ,” said Stork after the match. “Obviously this match was disappointing for us but overall this season was awesome.”

Senior Natalie Allen said she felt the team was deserving of the tournament and she was disappointed when they were not selected.

The Hawai’i Rainbow Wahine (21-6) received an at large bid to face the Duke Blue Devils, another at large team, in Seattle.

Allen said the team worked hard all season and thought they had a chance to make the postseason. Still, the team falling short of a tournament bid will not affect how Allen remember’s her last season.

“I will remember it through all the good things we did,” said Allen. “Sweeping Hawaii on our home opener (Oct. 10)… beating USD at San Diego (Sept. 19).”

These memories are ones that will stay with her forever, Allen said.

Other bright spots for the conclusion of CSUN’s 2014 season includes having four player receive Big West All Conference honors.

Senior Casey Hinger wraps up a decorated career with another first team selection. The honor adds to an already decorated resume featuring first team nods in 2011, 2012, 2013 and AVCA All-American honors in 2012 and 2013.

Boykins was named to the first team in her first season as a Matador with 23 aces, ranking her as one of the top servers in the conference, according to Go Matadors.

Stinson made the first team as well with career-highs in kills, kills per set, total attacks, hitting percentage and digs, according to Go Matadors.

Senior Sam Kaul received honorable mention accolades in the final season of a career that ranks her among top blockers in program history.

“When people aren’t in your gym every day they don’t see the contributions certain players make and Sam is one of those players,” said Stork in an interview with Go Matadors. “She doesn’t have the volume numbers of other players but Sam has been instrumental in the success of this team over the years. “