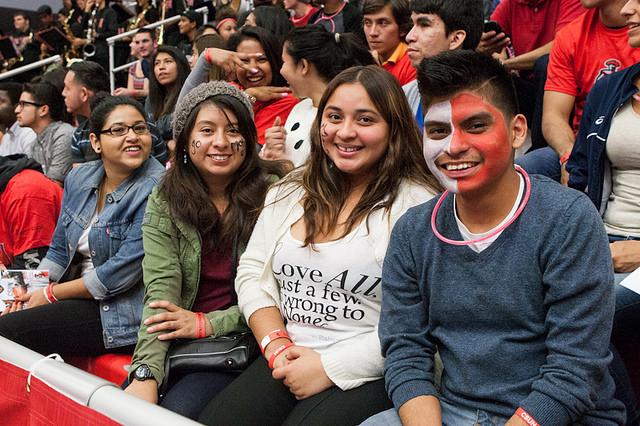 Female attendees at a CSUN men’s soccer game in November were greeted with a two-page survey regarding their experience as sports spectators on campus.

The surveys are being used as research tools in the recent partnership between CSUN and two University of Central Florida (UCF) professors to examine the female fan demographic and improve upon the overall game day experience.

“If this study can result in increasing the fan experience for our female fans, and really for all fans, we’d love that,” Ryan Swartwood, assistant athletic director for administration at CSUN, said. “Attendance across the board is up for the past few years. We want to keep that trend going in the same direction, up.”

Both C. Keith Harrison and Scott Bukstein are professors at the DeVos Sports Management Graduate Program at UCF, and have paired up for the first time to gather the female perspective on what many consider a male dominated pasttime.

Paige Gadsby, a graduate-assistant for the research team, said CSUN is the first campus, besides UCF, contributing to the study. There are plans to continue on to other colleges, though.

Harrison reached out to his CSUN colleagues earlier this year and invited the sports department to take part in the research initiative, according to Gadsby.

“They have done research with the NFL on fan engagement, focusing on female fans,” Gadsby said. “So they want to carry that over to collegiate sports.”

Gadsby, who helped distribute surveys at UCF home games, said the questions vary from how long they have been fans and why they’re there, to questions regarding the cleanliness of the stadium, merchandise style, fit and color, and healthier food options.

“Female fans make up a huge percentage of attendees,” Gadsby said. She later shared a statistic initially addressed by Harrison, that states 40 to 50 percent of women are fans of at least one major league sport.

She referenced a Harvard study that said a woman’s income makes up 85 percent of the disposable income in the average American household. With statistics like that, it is viable that better serving that demographic of fans could be economically beneficial for any sports organization.

Despite the fact that a large percentage of females are sports fans, there is not much focus on catering to female fans and attendance rates are often affected.

“There’s so much data and focus on the male fan experience, even in terms of apparel and jerseys,” Swartwood said. “We want to know how to enhance the female experience.”

Dianne Bartlow, chair of the gender and women’s studies department, said men’s major league sports are given more media attention and commercial endorsements than women’s, and therefore get the bulk of the public’s attention and regard.

“If there are not a lot of women, or an audience period, showing up to female sporting events I would say it is because they are not promoted equally or in the same manner that male sports are promoted,” Bartlow said of major league sporting events. She said that this uneven media attention could potentially be affecting the rate of female fans.

Bartlow, a fan of professional basketball and Kevin Durant, said that better promotion of female sports could engage a wider base of female fans to sports in general.

Kristyan Kouri, lecturer of sociology and gender and women’s studies, said that gender roles may play a part in why women are less likely than men to be sports fanatics.

“Gender rules and roles for women are different,” Kouri said. “Although women can and do play sports, being a sports star is not part of dominant American gender roles for females. So they are not taught to like sports in the same way that males are.”

Members of the women’s water polo team, Marissa Petra and Molly Bria, claim that game turn out is less based on gender and more based on who you know.

“I would say that it isn’t a gender thing, I would say it’s more team specific,” Petra, a kinesiology major, said. “Barely anybody comes to see polo.”

The two said they often go to games on campus with the rest of the polo team and the ratio of male to female attendees is not noteworthy. Bria thinks the ration of men to women is pretty even at CSUN games.

“I think the main reason you would go to a game is if you have somebody important playing in it,” she said, discounting that gender had any major role in on campus game attendance.

According to Swartwood, the surveys will continue to be distributed at upcoming men’s and women’s basketball games, after being passed out at men’s soccer games, all season.

He said that the bi-coastal partnership is seeking to improve the overall game day experience from apparel and concession options, to half time performances.

In doing so, the games hope to be more appealing to women, and in turn more profitable for the campus. This data collection and analysis will help researchers and campus officials  better understand the female Matador demographic, according to Swartwood.

“We’re really trying to find out what drives female Matadors to attend games and how we could improve that experience,” Swartwood said.