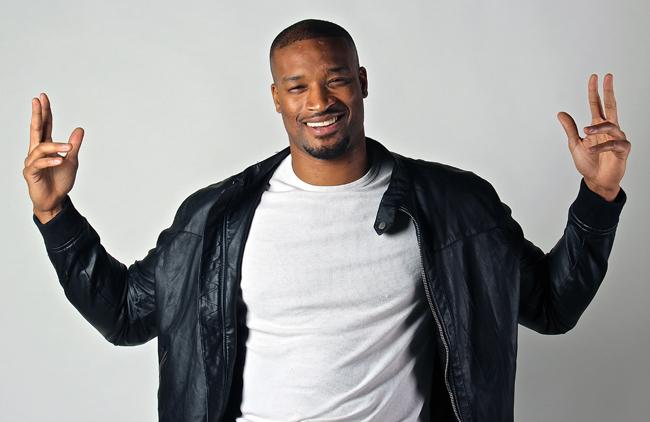 Sal Vance, 30, communications major, has traveled the country in search of happiness after overcoming homelessness and other challenges. Today Vance is finishing his last semster at CSUN. Photo Credit: Lucas Esposito/Senior Photographer

After waking up in the back of a truck with only mustard, ketchup and relish packets to eat, Sal Vance was determined to escape his state of destitution.

For several months, Vance had no place to sleep and little food to eat while living in Philadelphia. Once Vance reached out to his brother, Ralph, he took a bus to stay at his home in San Diego.

After moving to California, Vance began getting his life back on track by applying to various colleges. He was offered a basketball scholarship at CSUN and decided to enroll as a student. Vance played basketball for the Matadors in 2005. Switching gears, he decided to take a break from school and play professional basketball in Mexico and Guatemala.

Vance returned to CSUN at the age of 30, and is currently a senior majoring in communications.

“I started as a Matador and wanted to finish a Matador,” said Vance. “I love the campus and the people.”

This was just the beginning of the endeavors Vance endured on his road to success. After dealing with abuse, homelessness, poverty and starvation, Vance experienced a turbulent ride as he traveled through the country in search of happiness.

“My father was sentenced to prison when I was two-years-old for the murder of a man,” Vance said. “Growing up with a single mother who was not prepared for the situation she inherited, her frustration turned to pain, pain that myself and my family felt at her hands.”

“He always worked hard every time I was around him,” Powe said. “He never gave up on anything, he always believed in himself and was always confident.”

On top of going to school, Vance recently completed his first book titled “Say No More.” The book entails his personal story of going from poverty to success.

Vance is also an active member of the Los Angeles community. His friend, Arielle Caputo, said he hosts charity events for homeless teens.

Since meeting Vance almost a year ago, Caputo says she  watched him hold charity events and give back to underprivileged teens.

“He spoke to 120 youths at a homeless shelter just recently, sharing his journey and overcoming obstacles,” Caputo said.

Caputo said that you could hear a pin drop as she described what it was like when Sal spoke with the youths. She also said that there would be moments where laughter echoed through the shelter courtyard.

Caputo made it evident of how proud she is of Vance for successfully overcoming so many hardships.

“He is a very caring, compassionate and inspiring individual,” Caputo said. “There is talk of turning his book into a feature film, I know he plans on doing multiple book tours, where he plans to donate a lot of books to underprivileged youth.”

Not only does Caputo see Vance in this light, but Powe acknowledges his sensitivity as well.

“Sal comes off as a very strong individual, a very tough guy,” Powe said. “Really, he’s just like a big teddy bear, people don’t really know that when they first meet him but he’s really a nice, soft guy.”

Vance’s family members still reside in Philadelphia, but after his mother passed away in 2007, he lost contact with most of his relatives.

After overcoming such difficult battles, one might think it would create many emotional, physical, and financial setbacks. However, rather than wallowing in his pain, Vance used his disadvantages to bring him success.

“I overcame my struggles with hard work, faith and perseverance never giving up no matter how bad any situation was,” Vance said.

“I see a very bright future for Sal because of his determination,” Hill said. “He will not quit until he completes his goals. My hopes are that Sal continues to use his success to mentor and help others as he was mentored and helped along his journey.”

“My future goal is to coach college basketball one day,” Vance said. “I feel that coming from my situation I have an understanding to recruit kids that have passion and hunger and to help kids out that are in situations like I was.”

Vance’s story is motivational and inspiring to many of the people that crossed paths with him. Hill spoke of how Vance has positively affected his life.

“He has demonstrated that anything is possible if you stay focused on God and your goals you will be able to overcome many obstacles along your journey,” Hill said.

After everything he endured, Vance came out on top with a positive attitude.

“If I can make it through the fire and become a success and achieve so much from having so little, anyone can,” Vance said.

Vance’s book release event is on December 13th at 7:00PM in Los Angeles at the Silo Vodka Bar.  His book “Say No More” is available for purchase on Amazon. For more information visit www.iamsalvance.com